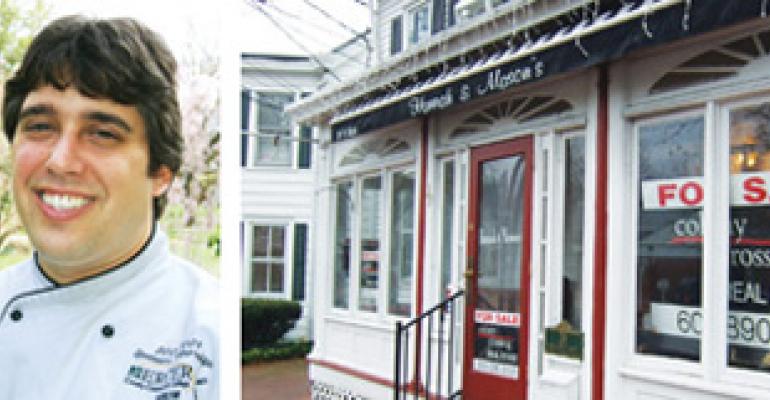 Under the Toque: For chef, closing a hellish experience

Before Chris Posner dropped off the keys to his recently shuttered restaurant, he put on a hat and sunglasses. He didn’t want to be recognized as he went to the building that housed his former business, Hannah and Mason’s restaurant in Cranbury, N.J.

“I was embarrassed,” he said.

Posner, 39, and his business had been featured on prime-time Fox television’s “Kitchen Nightmares” in 2008. He said he believes that the show didn’t necessarily hurt business, but it didn’t help either. The show’s star, chef Gordon Ramsay, temporarily shut the restaurant down during the episode. In real life, the closure occurred on one of the busiest nights of the year—Valentine’s Day.

“With or without the show, I think we would have closed,” Posner said. “I was holding out because I was waiting for the airing. We expected a whole lot more” business to result from the televised event, he noted. “If we got a dozen new faces in the door from the show, it was a lot.”

Without an increase in traffic and after months of slipping sales, Posner finally heeded the advice from his accountant and lawyer and shut the restaurant to halt the downward spiral. His wife started working full-time and Posner took over caring for their three young children.

Ultimately, the closure stemmed from a combination of factors, he explained.

“If the economy had been strong, I don’t think the show would have affected us in the least,” he said. “I don’t think it was a direct correlation.”

In fact, Posner said that when he first auditioned for “Kitchen Nightmares” he was rejected because the restaurant was too successful. During the months leading up to the show’s filming – the first couple months of 2008—business at the BYOB eatery was solid, with a 34-percent-food cost and check averages of about $27 per person.

The lure of the spotlight proved powerful, however, making him pursue the opportunity, he said.

“I thought it was cool that this celebrity chef would come and work side by side with us,” he said. “I thought it would be a fun experience, especially these days. Who isn’t on a reality show? Everybody is.

“As a viewer of reality shows, you don’t realize the editing and manipulations,” he added. “I found it very interesting.”

He thought Ramsay “might tweak” the concept, he said, “but never in my wildest dreams did I think he would throw everything out. They changed the whole feel of the place.” The restaurant was reopened on the show as a more casual, cafe-style concept with lower prices and a focus on local ingredients. Posner took the advice for a couple of months.

Ramsay’s new menu included a burger, sandwiches and a smaller filet that was 6 ounces rather than 8 ounces, the size of the original offering. But the new dishes caused “disappointment” among some vocal regulars, Posner said. He was told by some guests that if he didn’t return to his original menu, they would not return. Posner resurrected the pre-Ramsay version.

But the old menu didn’t help Posner and his crew shake the new feeling of regret they felt for participating on the show, especially since they battled with each other on camera.

“A lot of us felt dirty after the show,” he said. “We felt we rolled over with the questions the producers asked us. We got caught up in the excitement. We felt like we turned on one another. Me and Nick [the manager] and Mark [the sous chef], almost felt violated after the show aired.

“We’re like any other dysfunctional family,” he added. “We did fight a lot.”

Posner received a new deli case and “thousands of dollars of Gordon Ramsay china” in exchange for allowing America to view his real-life, back-of-the-house drama. And since then, Ramsay has faced problems with his own business empire, according to reports.

Once the film crew pulled away and a few more weeks passed, business slowly started falling. That began in April of last year.

“We didn’t bankroll because we didn’t see bad times coming on the horizon,” Posner said. “I didn’t think things would fall so fast. I thought it would turn around, but it just kept getting worse and worse. I should have closed a lot earlier because we were just digging a deeper hole every month.”

Prior to the show’s airing and the onslaught of the economic downturn, he did a good deal of corporate catering. But some of those customers saw the show when it aired and they stopped ordering business meals from Hannah and Mason’s. Others simply cut back as their catering budgets shrank.

“They pulled back the reins,” he said, “and there was added competition right down the block” from a new casual, more inexpensive cafe. “People said it would bring in business. It didn’t.”

By the last quarter of 2008, business hit an all-time low. The holidays were a bust and there were a few meal periods in January with zero covers.

“It was a terrible feeling,” Posner said. “In January we hit a wall. I was behind on my rent. It was a nightmare.”

As a side job, Posner started teaching at a community college located nearby. Now he teaches twice a week.

“I thought it could be fun,” he said, “and I really enjoy it. It wasn’t for the very low pay. But now that actually helps pay the bills.”

When he’s not teaching, he cares for his children who range between the ages of 2 and 8.

“That is more work than being at a professional kitchen,” he says. “It is constant, especially at their ages.

“But on the flip side, it is an unbelievable opportunity to have this time with the kids,” he continued. When he told his eldest son of the restaurant’s closing, the boy enthusiastically said, “Yea, Daddy is going to be home on weekends!”

“There is an upside,” Posner said.— [email protected]