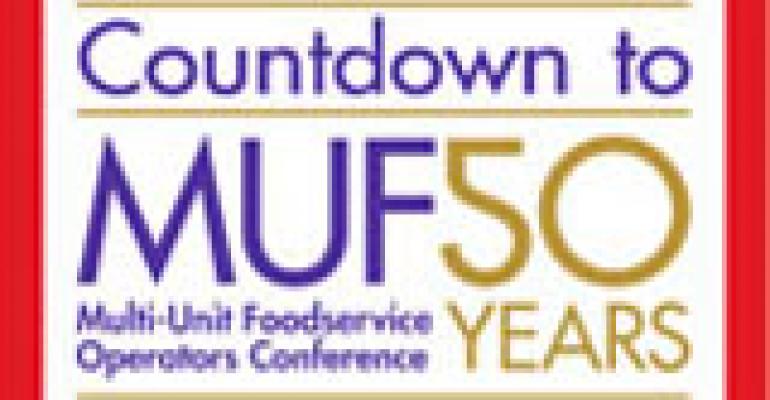 The times were a-changin’: At MUFSO ’69 tough topics were order of the day

Looking back there are certain years that leave an indelible stamp upon our history, whether because of political reasons, cultural accomplishments or scientific achievements. One of those years was 1969.

The year 1969 sounded the close of one of the stormiest decades in our nation’s history. With the Vietnam War and Civil Rights movements in full swing, it was a year that saw Richard Nixon become our president, the implantation of the first temporary artificial heart, the debut of “Sesame Street,” and the last public performance of the Beatles. It was also the year that saw more than 300,000 people gather at Woodstock to watch The Who, Jimi Hendrix and other musicians change the history of rock and roll. And, about 230,000 miles from there, Neil Armstrong took his one giant leap for mankind.

In our industry, Long John Silver’s, Arthur Treacher’s, Cracker Barrel, Ground Round, Old Spaghetti Factory and Red Robin all opened their doors for the first time, and, on a snowy November Saturday, Dave Thomas opened his first Wendy’s in a former steakhouse in downtown Columbus, Ohio.

That same year, the 10th annual MUFSO conference, held in Chicago, was similarly momentous. Earlier that year a boycott of Cleveland-area McDonald’s was launched by a coalition of groups called Operation Black Unity. The group demanded that the McDonald’s franchisees in the ghetto sell out to African-Americans, that a $150,000 contribution be made by McDonald’s to a ghetto improvement fund, and all new ghetto-area franchises be sold to African-Americans. The company agreed to the African-American ownership, but balked at the contribution, charging that it was extortion.

All of this came to a head at MUFSO, where NRN invited two African-American spokesmen to give their views of the situation. They were Ashby Smith, director of economic development for the Chicago Urban League, and activist Anthony Stadecker, director of economic development for the Kenwood-Oakland district, near Chicago. It didn’t take long for matters to reach a boiling point, with speakers making allusions to slavery and hurling racial epithets at conferencegoers.

While the exchange may not have been a shining moment in MUFSO history, it did show operators that the times were changing, minorities were gaining a stronger voice and, if chains planned to expand into the inner-cities, they would need to deal with such activists.

MUFSO 1969 also took a look at such trends as a slowdown in market growth, menu expansion, franchising, and how to keep employees motivated and happy—issues that certainly will resonate with 2009 conferencegoers as much as they did 40 years ago.

While this year’s MUFSO shouldn’t be as controversial as it was in 1969, one thing is certain, and that is that attendees will still come away with a new sense of purpose to face our current challenges.