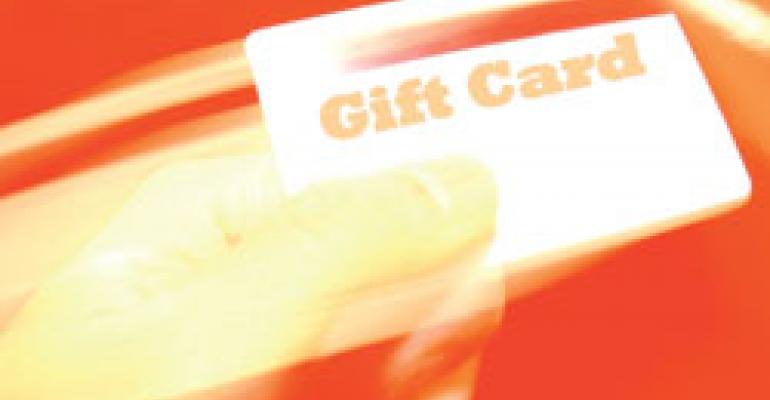 Restaurateurs hoping for a robust holiday shopping season will have to make peace with the fact that many consumers are still cutting their spending, even on the most popular stocking stuffers: gift cards.

A recent study conducted by Consumer Reports showed a general lack of enthusiasm for receiving gift cards. Of American consumers surveyed, 46 percent planned on buying a gift card but only 15 percent wanted to receive one.

Even though other studies show spending on gifts and gift cards alike will remain weak this year, restaurant operators acknowledge they still need to capitalize on holiday traffic as much as possible by promoting gift cards aggressively and enticing shoppers from nearby stores and malls.

Noodles & Company, Dunkin’ Donuts and Starbucks are among the restaurant companies trying to help customers rediscover the joy of giving gift cards by offering customized and personalized cards.

Broomfield, Colo.-based Noodles launched the Lunch Buddy Gift Card, which can be personalized with a photo of the giver or recipient. Noodles also supplies small easels that customers may use to prop up their gift cards at the table, so that they may look at a friend’s image on the card, even when they have to dine alone.

“Overall, the gift card’s becoming a little commoditized, and there’s a sea of sameness with them, so we thought, ‘Let’s do something different and fun,’ ” said Jill Preston, 225-unit Noodles’ director of communications. “We hope people have a lot of fun with it.”

The company was inspired to shake up the practice of giving gift cards, Preston said, because they’re still popular. With the Lunch Buddy Card serving as a portable picture of loved ones, recipients hopefully will keep the card and thus keep Noodles & Company top of mind, she added.

“We want people to keep these and reload them,” she said. “It’s a gift that keeps on giving, and it’s not something you just throw away, because it’s a picture of somebody.”

Gift givers can visit the Lunch Buddy Support Center microsite to upload a photo and resize it, choose a “stand-in” from Noodles’ online gallery of lunch buddies, send an online invitation to meet for lunch, or purchase $20 cards. The company also will roll out a contest later this month where two friends could win a grand prize of Noodles & Company meals for a year, just for uploading photos of themselves to the website.

At McAlister’s Deli, gift cards have lost some of their effectiveness at driving holiday sales and first-quarter guest counts, said Phil Friedman, chief executive of the more than 300-unit fast-casual chain. McAlister’s will continue to promote its Deli Dollars gift cards, but a bigger push will be made to advertise the chain’s side dishes and iconic sweet tea as holiday catering options.

“We were very aggressive with gift cards the last few years, and last year they seemed to really lose their momentum,” Friedman said. “It seemed to move dollars from one month to the other, and last year’s January sales weren’t spectacular. So gift cards are in the mix this year, but not quite as prominently. They’re not the promotional leader.”

A report from the National Retail Federation found that, while gift cards would remain the most requested gift this year, holiday shoppers plan to spend less on them. The report also showed that restaurants still would be among the most popular places to buy a gift card, as 33.4 percent of gift givers surveyed said they would buy at least one gift card from a restaurant. Only department stores proved more popular with survey respondents, at 38.4 percent.

Chain and independent restaurants are offering extra discounts as an incentive for people to buy more gift cards.

IHOP, the 1,433-unit family-dining chain, will give a $5 coupon to guests for every $25 in gift cards they purchase now through Jan. 3, 2010. Bonefish Grill, a dinnerhouse brand in the OSI Restaurant Partners portfolio, not only will give guests a $20 bonus gift card for every $100 in certificates purchased, but it also will enter those customers into a sweepstakes for $5,000 in cash and a $5,000 donation to a local charity.

Some industry partners, such as , will even do much of the heavy lifting for gift giving this holiday season. As part of its second annual Feed it Forward initiative, will set up a giving website and Facebook application for customers to pass along 3 million restaurant gift certificates, loaded with $10 to a member restaurant, free of charge.

Cary Chessick, chief executive of , said the company started Feed it Forward last year to put out a positive story amid all the doom-and-gloom news of the recession. The initiative lasts from Thanksgiving Day to Christmas Day, and the company expects more than 6,500 restaurants to participate.

“It’s not like we’re filling people’s pocketbooks with millions of dollars, but we’re giving them the ability to give someone something for free,” Chessick said. “The result is that a tremendous number of gifts are going to be given, and people will go to restaurants when they wouldn’t have had a chance to before.”

Cleveland Independents, an association of 80 Cleveland restaurants, is making an aggressive e-mail marketing push for The Deck, its pack of 52 $10 gift certificates for member eateries. Customers can purchase The Deck, a $520 value, for $30. In addition, branded Cleveland Independents gift cards are redeemable at any member restaurant and come with a “little black book,” or a directory of all the eateries in the cooperative.— [email protected]