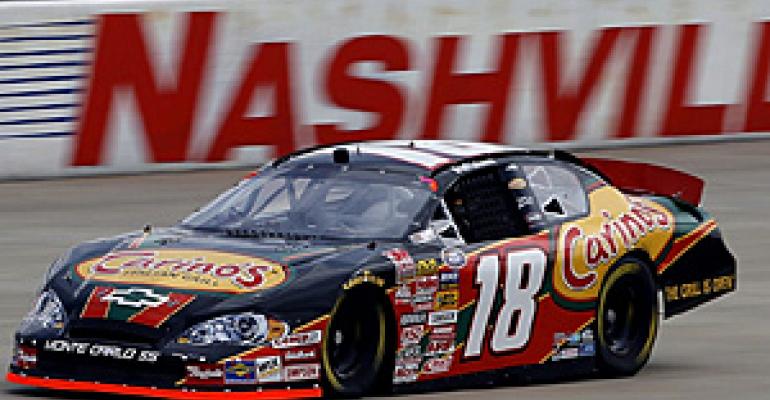 Americans love their sports— from college football to major league baseball, NASCAR and any number of other spectator activities, all of which draw exuberant and extremely loyal fan bases. Today's restaurants are tapping into that national obsession through such initiatives as sports sponsorships and in-house sports marketing endeavors.

"You've seen an increase in the acceptance of sports marketing as a powerful vehicle for brands to utilize," noted Eric Wright, vice president of research and product development for Joyce Julius & Associates Inc., a research firm dedicated to sponsorship impact measurement.

Larger chains have been using sponsorships in recent years as a way to bolster brand awareness. Those efforts range from Taco Bell in its sponsorship of the 2007 World Series to Checkers Drive-In/Rally's sponsorship of several NFL teams and NASCAR.

Hooters, which now has more than 435 units in the United States and around the world, has relied on sponsorships as a key marketing vehicle since the chain's launch in 1983. The chain turned to sponsorships early on in its history because traditional marketing avenues were not open to the chain because of its racy, sex-laden image.

"Early on, networks wouldn't take our commercials," said Mike McNeil, vice president of marketing for the Atlanta-based casual-dining chain. "When we got involved in sports sponsorships, it was a way for us to penetrate into our competitors' environment."

The restaurant company found its place on the map in 1992, when the Hooters car won the NASCAR Winston Cup. At the time, the company had about 100 restaurants, McNeil said.

"It really thrust us onto the national scene," he said. "It also gave us business credibility."

The company today has moved beyond NASCAR, whose sponsorship price has since skyrocketed well beyond the 1992 cost of $2.2 million. But the chain sponsors several of its own leagues, including Hooters IHRA Racine, Hooters Powerboat Racing and NGA Hooters Pro Golf Tour.

Like Hooters, Carino's Italian Grill, a casual-plus chain with 160 units, last year took on a NASCAR sponsorship to build brand recognition. Carino's is owned by Austin, Texas-based Fired Up Inc.

"A mid-size restaurant group is not going to outspend a category monster like Olive Garden, so you have to outsmart them," said Brandon Coleman Jr., chief executive of Big Picture Thinking, a strategic branding firm. "You have to create better food, better value, and find creative ways to get the message out. NASCAR is one of our vehicles for getting that message out."

The effort has worked well, according to Coleman, who has been the mastermind behind the company's sponsorship initiative. It garnered the company more than $6 million in press coverage last year, Coleman said, even while the company spent less than $2 million on the sponsorship.

The success, he said, stemmed from the sponsorship as well all the programs that accompanied the sponsorship. One NASCAR-related promotion was The Great Italian Grill Off, where the company asked consumers to submit recipes of grilled Italian dishes. The company received 30,000 entries. The winner won $10,000 and a trip to a NASCAR event. This year the company plans to host a range of value-driven promotions.

"Quite frankly, if you think you are going to sponsor a car, put your logo on the hood and go around in circles on TV and make a return on your investment, you have a tough lesson to learn," Coleman said. "When a company or brand embarks upon this powerful medium, they must activate it through various marketing strategies to realize its vast potential."

Indeed, as sponsorship fees have increased in recent years, restaurants are working harder to maximize those investments, experts say.

"There's a whole laundry list of what a sponsorship can offer you," Wright explained. "It can give you brand awareness, association with a certain group, business opportunities, etc."

Asponsorship — even a NASCAR one — doesn't have to eat up the entire marketing budget either, Coleman said.

Last year the company sponsored a partial NASCAR schedule for less than $2 million.

It pays to think creatively, Coleman said. "It's expensive if you don't do it right," he said.

Like other marketing initiatives, the value of sponsorships comes down to the return on investment.

"The key to it is there is tremendous exposure associated with sports sponsorships," McNeil of Hooters said. "I think the key is paying the appropriate amount for what you're going to receive."

While sponsorships are an important sports marketing tool, many more chains are marketing sports on a more casual, in-house level.

Times Grill Restaurant Group, a casual restaurant chain based in Jacksonville, Fla., found a new audience this past football season by tapping into college alumni organizations in the city. It invited such groups out to watch their alma maters play.

The chain, which has less than 10 units and caters to a family-style crowd, has no desire to be a sports bar. Still, it doesn't mind expanding its range from time to time. When Louisiana State University recently played Ohio State, 60 to 70 LSU alumni came to watch at the restaurant, said Kelly Harris, president and chief empowerment officer of Times Grill.

"We put on the speakers," he said. "For those few hours we were a sports bar."