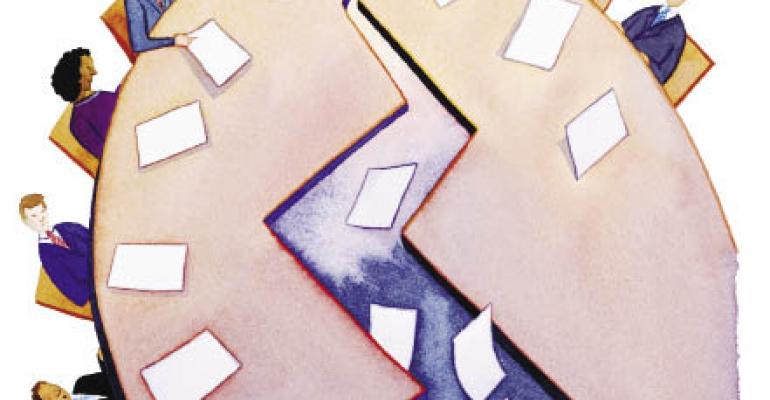 Boardroom battles at Denny’s and Red Robin have made headlines in recent months, and some say a provision in the massive federal financial overhaul bill could change the game for shareholders seeking more clout in the future.

The bill, which the Senate passed in a 60-39 vote July 15 and was expected to be signed into law by President Obama, includes “proxy access,” a concept long sought by corporate watchdog groups intended to make it easier for shareholders of public companies to nominate independent candidates to boards.

The goal is to increase  accountability at a time when some are blaming the recent economic crisis in part to the lack of regulatory oversight of Wall Street.

Currently, shareholders who want to nominate a candidate to a board must take on the cost of doing so, including legal fees and travel expenses, publicizing candidates and mailing their own ballots — all of which can cost millions of dollars and put a board bid out of reach for most. The reform bill essentially would ease those requirements.

Opponents of proxy access say such obstacles are necessary to prevent hedge funds, special interest groups or gadflies from gaining power and hijacking management — or at the very least, distracting them from more serious potential candidates.

Supporters, however, say increasing shareholder access could prevent an entrenched board from digging a moat around the castle and locking the gates.

The SEC proposed a proxy access rule last year that calls for a threshold of ownership ranging from 1 percent to 5 percent, depending on a company’s market cap, with a one-year holding period.

“The SEC doesn’t want any Joe Blow with one share to be able to do this,” said Michael R. Levin, an activist-investor adviser and author of TheActivistInvestor.com website. “Investors [who want to put forward candidates] have to show meaningful ownership.”

However, questions were raised about the agency’s legal authority to change the process.

With the provision in the financial overhaul legislation, lawmakers affirmed the SEC’s authority, leaving it to the agency to establish the rules — as well as the potential to exempt small companies. The rules at press time were yet to be finalized.

Levin contended that some form of proxy access would have greased the path for activist investors in the recent Red Robin Gourmet Burgers Inc. case.

Earlier this year, a group of investors — Clinton Group Inc. and Spotlight Advisors LLC, holding about a 7.7-percent stake at the time — successfully added three board members and negotiated an agreement that the company would search for a new chief executive to replace Dennis Mullen.

Greg Taxin, managing member of Spotlight Advisors, said it was the threat of a proxy battle that motivated the restaurant company to reach a settlement.

Taxin said he did not think proxy access would have changed the outcome, and he doesn’t think investors serious about implementing change would avail themselves of the rule, if instituted.

“I’m a bit of a proxy-access skeptic,” Taxin said. “We may see less serious or less professional investors attempting to use that process. But I believe people who have tens or hundreds of millions of dollars at stake … are not going to choose this route just to save a few postage stamps.”

Taxin said the real cost in backing a board candidate is not tied to the proxy process, but in recruiting and educating a qualified candidate, conducting research to identify strategies for a turnaround, and soliciting shareholder support — all investments that will not go away with increased shareholder access to the proxy card.

“It all takes resources, time and money,” he said. “It would be foolish not to spend a couple hundred million dollars to do it the right way.”

At Denny’s Corp., however, management put up more of a fight in fending off a move by activist investors there to gain board seats, observers say.

Earlier this year, a dissident shareholder group — which held about 6.5 percent of Denny’s shares — attempted to gain three seats on the board in a bid to remove board chair Debra Smithart-Oglesby, then-chief executive Nelson Marchioli and former chairman Robert Marks.

In the end, observers say, the dissident group partly achieved their goal and got management’s attention.

However, Michael Ezer, managing partner for Dash Acquisitions, said a proxy-access rule “would have allowed us to avoid considerable expense and could have changed the outcome of the vote entirely.”

Ezer argued that the ability to place both company and shareholder nominees on the same proxy card would be “a sensible step in the right direction.”

Under the current rules, Denny’s shareholders were effectively disenfranchised because “mixing and matching candidates from competing slates is not possible unless agreed upon by both parties,” he said. “I believe we would have gained representation on the board if the shareholders were given more flexibility via a universal proxy.”

Ezer also estimated that Denny’s spent millions attempting to block the effort to win board seats.

Denny’s did not return calls seeking comment by press time.

The dissident shareholders weren’t the only ones who could have benefited from proxy access, noted Craig Weichmann, a boutique investment banker with Brazos River Advisors in Dallas.

Weichmann was hired by one of Denny’s largest franchisees, John Metz, to write two reports on Denny’s prior to the board battle. Metz was hoping to gain a board seat himself, Weichmann said.

Metz, however, was trying to do it “the old-fashioned way,” by petitioning the board search committee with the argument that he could contribute, based on his background and vested interest in the brand.

“He was shot down,” Weichmann said.

Had some measure of proxy access been in place, “there would have been a mechanism in place to gain a legitimate voice to improve results,” Weichmann said.