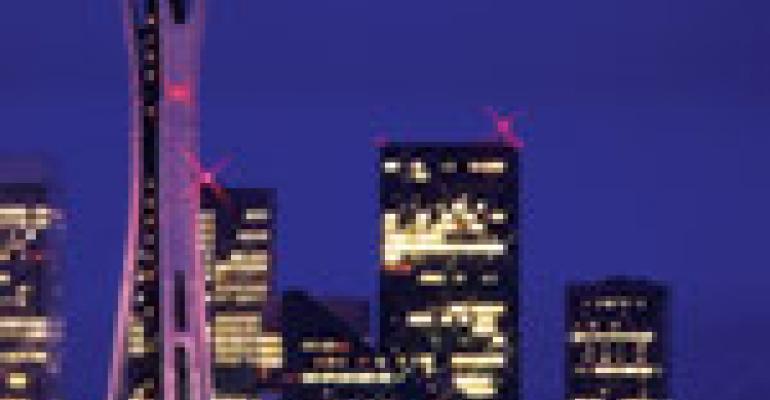 Opening two restaurants in a year when Seattle’s King County has an unemployment rate topping 8 percent may seem crazy, but Howie is riding a surprising local trend. Many new, chef-driven restaurants at a variety of price points have opened and are thriving in the Emerald City during the past year, despite economic woes that have included the loss of Washington Mutual, formerly based here.

Seattle chefs say discerning diners are hooked on quality cuisine featuring fresh, local ingredients, and are unwilling to give up patronizing their favorite local chefs, gloomy economy or no.

Howie said that while he had projected he’d do 75 lunches at John Howie Steak on a weekend shortly after opening, he actually served 85.

“I’ve got no regrets at all at this point,” he said.

But it’s not all happiness and lattes within Seattle’s dining scene. While there is enthusiastic support for the ventures of homegrown celebrity chefs, there have been recent closures as well, including such acclaimed local eateries as Yarrow Bay Grill, Union Square Grill, Cremant, Mistral and Veil. National players Trader Vic’s and Oceanaire also came and went.

But unlike during the dot-com bust, when many local restaurants closed and nothing new of note seemed to open for years, this time around there’s been a steady stream of new high-profile restaurants.

Many of the new eateries feature chefs with previous local hits under their belts, and many were also planned long before the economy went south. What’s unusual is that once the doors opened, people started coming, and then they just kept on showing up.

In the first wave of openings last fall was acclaimed chef Jerry Traunfeld, whose rabid following trailed him from local fine-dining icon The Herbfarm to his new entry, Poppy, sited in a developing neighborhood east of downtown Seattle. The new concept is based around “thali,” Indian-style meals consisting of small portions of many dishes served together on a platter, at a price point around $32.

If anything, Traunfeld said, the timing of his move from The Herbfarm—known for its elaborate, nine-course dinners—to Poppy was on-trend, as diners have scaled back on dining at the top of the price scale.

“We had throngs of people coming through the doors in the first few months,” he said. “I can’t explain why there’s such great energy in Seattle’s dining scene right now. Seattle loves chef-owned restaurants.”

Some Seattle chefs whose previous eateries recently folded have quickly returned to the scene, including Mistral’s chef-owner William Belickis, who plans to open an expanded new incarnation, Mistral Kitchen, in South Lake Union, according to Seattle Magazine. Shannon Galusha, who grabbed attention at Veil, opened French-inflected Bastille in the Ballard neighborhood earlier this summer.

Some chefs have also moved freely between kitchens in the recent past. After opening chef Justin Niedermeyer of the high-grade neighborhood Italian restaurant Spinasse departed, former Poppy sous chef Jason Stratton left what was widely seen as a sure success story to take Spinasse’s helm. Like many of the new, successful eateries, Spinasse has kept prices moderate and has a small footprint, seating just 40 or so.

Sitka & Spruce chef-owner Matt Dillon also doubled down, renovating a small, aged brick building in Seattle’s gentrifying Georgetown neighborhood and opening The Corson Building in June 2008. Dillon rides the borderline between fine dining and the upper-midrange, with prices that vary from $18 for entrées on Wednesdays to $120 for dinner and wine on Saturday nights. Recent dishes have included guinea fowl roasted with grapes and chanterelle mushrooms, and black rice with squid.

“I think Matt’s killing the deal down in The Corson Building,” enthused Wild Ginger owner Rick Yoder. “His food is off the hook. It’s so exciting to see people doing that level of work.”

Though the Seattle market hasn’t always been kind to national celebrity chefs—Wolfgang Puck is among the notables whose eateries did not take root here—Brennan said he nonetheless thinks his Artisinal concept, based around locally grown food and handmade dishes, will be a hit.

“If the first couple days are any indication, I think the concept is right,” he said.

The chef-eatery boom may not be over yet. Tom Douglas, perhaps the most well-known Seattle chef, said he is scouting locations in Ballard for what would be his sixth restaurant. The creator of Dahlia Lounge, Palace Kitchen and other Seattle eateries lives in the neighborhood.

Douglas says the buzzing restaurant scene has been driven in part by the real estate market: Prime sites are available, and prices are down.

“I’m looking near [Ballard’s] Majestic Bay theater, and there’s 10 good spaces for lease within three blocks,” he said. “It’s hard to walk away from the deals.”