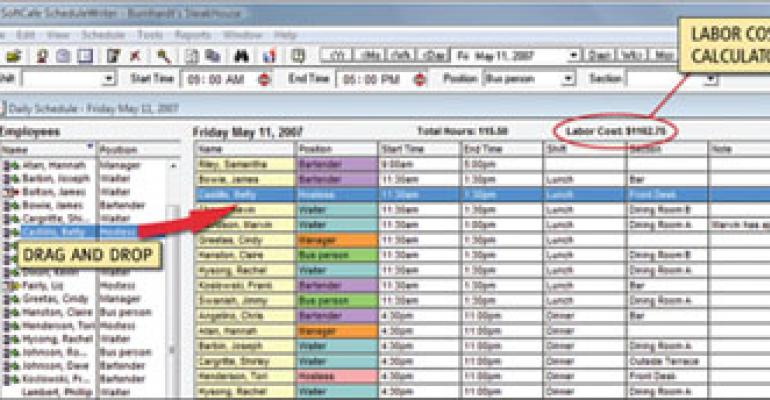 Get in, set up an effective staff schedule and move on to the next task: That’s what most restaurateurs want out of their scheduling software. But knowing that doesn’t necessarily make their search for the right software any easier, as the schedulers available today run the gamut from elementary point-of-sale-system modules to high-end workforce management applications.

The trick, some operators indicate, is to find the right system or service without buying features that will go unused.

“There is always a point where you [can] go over the curb,” or where “you spend money but don’t get the value you want,” says Fran Ohman, human resources director for three-unit Elephants Delicatessen of Portland, Ore., an upscaledeli chain with extras such as cheese departments and wine bars. “I’m a very frugal person. I always compare value versus price.”

Operators have ever more options when choosing scheduling software that meets their needs without blowing the budget, from traditional PC-based applications to Web-based schedulers delivered via an on-demand business model.

The Web proved just the solution to a significant scheduling issue at Elephants.

“Three years ago I would do exit interviews, and 85 percent of the employees who had left had a major complaint about scheduling,” Ohman says. “They’d take two days off, come back, and the schedule had changed and they’d get written up for missing a shift.”

So Ohman was thrilled when her PC-based scheduling software provider, Atlas Business Solutions, unveiled a Web-based version of its ScheduleAnywhere promising features such as remote access and job costing.

“We’ve been on the Web for two years, and we’ve had zero complaints in exit interviews,” says Ohman, whose company also has a catering operation and boxed-lunch business. “Employees love it. They can check their schedule and email requests to their supervisors. A lot of people in this industry work two jobs, and this helps them avoid conflicts.”

The application is served remotely from Atlas’ data center. One staffer from each store sets schedules for that unit’s entire operation right on the website, with the company’s rules and parameters built in. The ability to see a graphic depiction of departments and scheduling needs enabled at least one staffer to amass significant savings.

“She saved $13,000 based on the ability to move things around like pieces on a chessboard and try scenarios quickly,” Ohman says.

That employee realized those savings, she explains, by finding ways to move workers from one department to another during their shifts according to business need.

Shading over an employee’s entry alerts schedulers when that person is in training mode and needs another worker as a shadow. Web-based reporting allows Ohman to calculate job costs and other labor metrics.

Ohman says turnover at her company decreased 20 percent because conflicts with supervisors were avoided and adds that communicating on the Web appeals to younger staffers.

“This generation loves to have control over their working environment,” she says.

Elephants pays $800 annually for the hosted service, a model that took Ohman some getting used to.

“I was really reluctant to do that, but I’m pleased” with the result, she says.

The same expenditure, $800, bought McClean, Va .-based RMR Restaurant Development a PC-based solution with some of the features found in costlier packages, while meeting the company’s primary demand: a simple user interface. RMR is a seven-unit franchisee of the Five Guys Famous Burgers and Fries chain.

“We’d been using a high-powered spreadsheet built with master scheduler elements, and it was functional,” says RMR’s Ed Pizzarella. “But in the restaurant industry, you have people who are great at managing but not necessarily computer experts. It was difficult for managers to use without a ton of Microsoft Excel experience.”

Pizzarella also sought the ability to easily convert schedules into PDF files, so managers could easily print and display the schedule and post the schedule to the Web for easier employee access. That search led to SoftCafe’s ScheduleWriter, which featured some of those capabilities and delivered on others in a version upgrade.

“The biggest thing is, it’s very difficult to break,” Pizzarella says. “All you do is drag and drop. Restaurant managers are very visual people, so it makes things fairly easy for them.”

He explains that managers can drag and drop elements of previous schedules into the latest version.

The software tracks employee availability and references that when the manager composes a schedule for the 20 to 25 staffers at each RMR store. ScheduleWriter displays a big red “X” if the proposed schedule breaks a rule or conflicts with availability.

“I’m getting an hour or more productivity on the floor with managers that don’t dread writing the schedule anymore,” he says.

RMR had considered several higher-priced scheduling packages, but found they were better suited for other industries or other types of restaurants with multiple job classes. The Five Guys’ concept uses just two job types and cross-trains, so RMR executives didn’t want to overpay for unnecessary features.

“A program that tracks five or six types of labor is not as important [to us] as a user-friendly interface,” Pizzarella says. “It’s by far the easiest software I’ve scheduled with.”

RMR isn’t leaving sophisticated functionality behind. Next, the Five Guys franchisee is integrating its POS, payroll and ScheduleWriter in order to compare actual hours to scheduled hours. Pizzarella also plans to build a report to equate sales volume to staffing levels and tie that data to forecasts in order to schedule based on demand, a capability typically found in high-end workforce management suites.

When buying scheduling software, both Elephants’ Ohman and RMR’s Pizzarella say they ultimately succeeded by focusing on the specific needs of their organizations, not such things as a product’s share of market or the length of the features lists in marketing materials.

“We bought software in the beginning that was not a fit but was a popular piece of software,” Pizzarella acknowledges. “We didn’t do a lot of research. I strongly suggest you know what the business is before you hunt for software.”