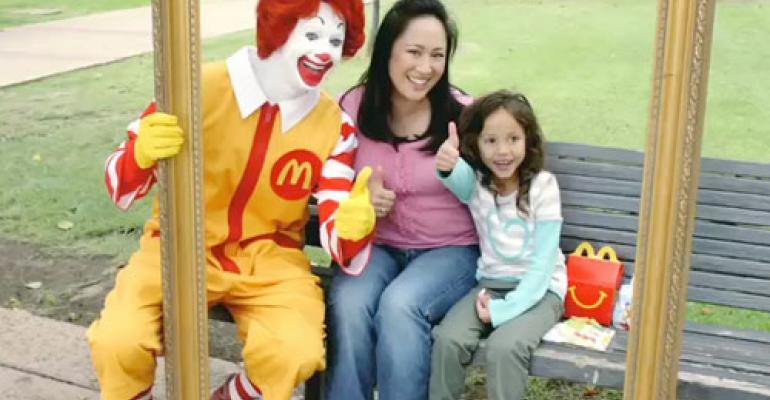 After an absence, the clown will star in new commercials set to air this month

Ronald McDonald is back in the spotlight, not long after industry watchers had speculated that McDonald’s advertising for adult-focused menu items and activists’ criticism would force the character to keep a low profile.

The red-headed clown, McDonald’s mascot for decades, will star in several new commercials advertising Happy Meals, encouraging children to visit the HappyMeal.com website, where they can upload pictures of themselves to be integrated into Ronald McDonald videos, a McDonald’s Corp. representative said Friday. The videos, or “Ronaldgrams,” then can be e-mailed to the children’s friends to play recorded messages to say “happy birthday” or “congratulations.”

McDonald’s ad agency, Leo Burnett, created two commercials featuring Ronald, both of which will air on the Cartoon Network, Nickelodeon and Disney XD channels. One will debut April 6, the other on April 8.

Ronald has not appeared in commercials for some time — as noted in a report by Bloomberg last month — with McDonald’s spending much of its marketing budget pursuing adult consumers with its McCafe beverage line, Angus Third Pounder burgers and Dollar Menu. The well-known clown does remain a constant presence on Happy Meal packaging and as the face of Ronald McDonald House Charities.

Some groups are not so happy that Ronald is back in front of the camera, however. In recent years, the Center for Science in the Public Interest and Corporate Accountability International both have criticized McDonald’s use of Ronald McDonald to advertise directly to children, with the former suing the restaurant chain for deceptive marketing practices and the latter leading a campaign to retire Ronald permanently.

“One month, executives are saying Ronald is now playing a different role than TV personality,” Deborah Lapidus, spokeswoman for Corporate Accountability International, wrote in an e-mail Friday to Nation’s Restaurant News. “The next, they are elevating Ronald to television again to see if his star power can move kids over to a more engaging platform for young minds. Ultimately, McDonald’s is going to realize the public is increasingly linking fast food to diet-related disease and, therefore, the public’s appetite for kids’ marketing is on the wane, no matter the medium.”

McDonald’s responded to the latest round of criticism in a statement to Nation’s Restaurant News, saying that “Ronald encourages creativity and imagination in the digital world, and Ronald.com and HappyMeal.com are safe, fun sites where kids can learn, play and create.”

“Kids live in a digital world, and there’s a lot of great content to enjoy at both sites,” the chain added. “Ads note that children should get their parents’ permission. On Ronald.com, there’s a safety quiz for kids and information for parents. In addition, at HappyMeal.com, there are fun videos that encourage eating more fruit and vegetables.”

Corporate Accountability International argues that targeting children with advertisements is still inappropriate, no matter the level of involvement of the parents the commercials may elicit.

“Plain and simple, if McDonald’s were truly concerned about ‘parental choice and control,’ they’d market their offerings directly to parents, not children,” Lapidus wrote

Oak Brook, Ill.-based McDonald’s Corp. operates or franchises more than 32,000 restaurants worldwide, include more than 14,000 locations in the United States.