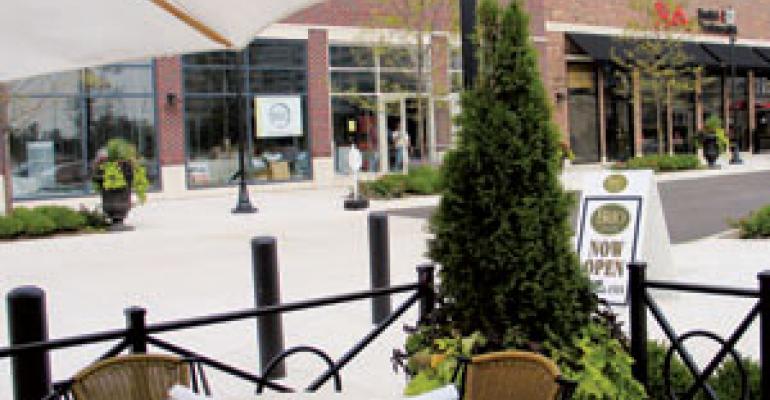 Vacant stores, empty restaurants and desolate parking lots—that’s the fate that has befallen many older shopping malls in suburban areas that have been eclipsed by the advent of “lifestyle centers,” often resembling idyllic, small downtowns, with attractive streetscapes and ample, convenient parking.

Increasingly, the bleakness at older malls is giving way to lifestyle makeovers as developers give properties face-lifts to make them competitive again with the help of full-service restaurants as major tenants or anchors. Now revitalized shopping centers nationwide are new-wave dining destinations.

“Restaurants have gone from being a stepchild to being a critical part of the mix,” said Jeff Dodd, senior vice president of leasing for the Irvine Co., which manages Irvine Spectrum Center and Fashion Island, both premier retail-dining-entertainment centers in Orange County, Calif.

“People are spending more money dining out,” Dodd said. “Retailers want to have great restaurants close by because they realize they bring in good customers. Opportunities for strong [foodservice] operators are as good as they’ve ever been.”

The biggest challenge for developers is to create a mix of restaurants that’s a little different from everyone else, Dodd said.

“We try to identify local and regional players or lesser-known brands of national players,” he said.

However, smaller operators seeking a lifestyle center location need deep enough pockets to be able to afford high rents and escalating construction costs, especially if they expect to get their opening investment back in two to three years.

“Costs may be higher than in a strip center or an existing space or freestanding construction,” said Peter Haback, vice president of restaurant leasing for General Growth, a Chicago-based developer of malls nationwide. “If a tenant wants to do something with us, we can usually figure out the economics.”

If all goes as planned, operators of larger restaurants should be able to realize sales ranging from $700 per foot to $1,000 per foot, he said.

Sometimes a landlord seeks out a locally popular restaurant with just one or two units to distinguish a mall from competing shopping centers. The newly reopened Natick Collection in Natick, Mass., is home to Sel de la Terre, the third restaurant of acclaimed Boston chef Frank McClelland of L’Espalier and Metropolitan Bar & Grill.

Sel de la Terre will be joined by two tenants of other upscale malls, P.F. Chang’s China Bistro and The Cheesecake Factory, Haback said. An independent seafood house also will open in the near future, he added.

Bob Long, president of Yorktown Center Mall in Lombard, Ill., has signed a combination of 14 local and national restaurants to deals at the newly revitalized mall his family first opened in 1968. Located three miles from the Oak Brook Center in affluent DuPage County, Ill., west of Chicago, Yorktown had suffered the loss of two department stores and many other tenants over the years.

“We love our collection of restaurants,” Long said, adding that the nearby suburbs and high-tech business corridor were under-served by high-end eateries. “It’s not the same old lifestyle center.”

“There are more opportunities for restaurants now,” Doody said. “There are 15 to 25 new lifestyle centers opening a year, and we are seeing more and more shopping centers that are doubling in size.”

Doody has worked with the same developer to land spots at multiple malls, as has RA Sushi, a 14-unit full-service Japanese-American restaurant based in Scottsdale, Ariz., that has units in six states. Its sites range from bigbox centers to upscale lifestyle centers such as Kierland Commons in Scottsdale and Yorktown Center. So far RA, which has a lively bar and nightlife component, has been able to justify the higher rents usually charged for choice locations, said Scott Kilpatrick, the company’s vice president.

The main problem RA has encountered in some popular centers is a lack of parking, especially at Kierland Commons and in Palm Beach, Fla. Parking is one of many considerations operators need to research before signing a lease, said Greg Stoffel, a shopping center consultant in Orange County, Calif.

“A good center may not be the best choice, depending on where the actual space is,” he said.

For instance, being adjacent to a multiplex theater may seem ideal, but restaurant tenants must weigh the loss of nearby parking, Stoffel explained. Also, revitalized older centers offer advantages such as known locations surrounded by filled-in population density. But, Stoffel said, operators need to find out how well management of such centers supports its restaurant tenants.

“They have to take care of their property, or they will lose,” said Mark Seferian, vice president of development and partner for 42-unit Elephant Bar Restaurant of Goleta, Calif. Redevelopment of older malls has grown as the pace of building new centers has slowed with saturation, he said.

An Elephant Bar debuted recently in the renewed Golf Mill Center, anchored by Target, Sears and Kohl’s, in the working-class suburb of Niles, Ill.

Elephant Bar, which has check averages of $19 for dinner and $13 for lunch, has prospered in many locations with differing demographics, Seferian said. Partnering with a few mall developers has helped the concept expand from California to 11 states.

“It’s a symbiotic relationship,” Seferian said. “The mall drives repeat traffic to us, and we drive traffic to the mall. Developers realize that.”