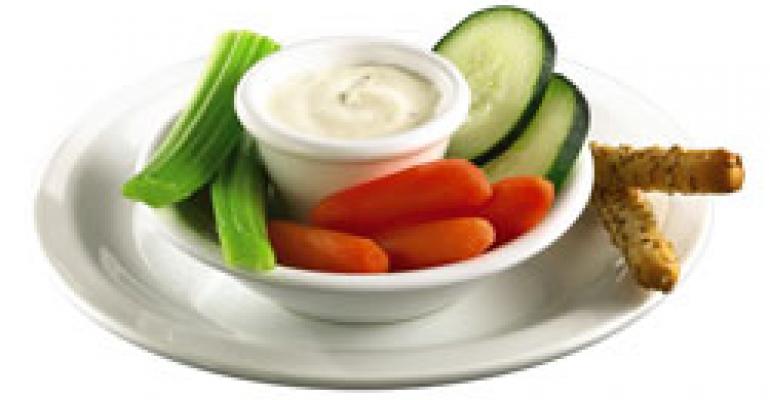 This is the first installment in a four-part special report focusing on kids' menus, exploring why these separate menus are important, the latest ingredient trends for children and the best ways to market a menu for kids. The series is sponsored by Kraft Foodservice. Look for the next installment in the June 8 edition of Casual Dining News.

While everyone from the first lady and lawmakers to consumer watchdogs and the odd celebrity chef chimes in on kids' eating habits and childhood obesity, some restaurant operators are seeing upticks in sales and traffic after tweaking their kids' menus.

Denny’s, after launching a new and lighter sports-themed menu for children last year, served an average of about 50 kids’ meal plates per day per store, said Sharon Lykins, senior director of product innovation for the Spartanburg, S.C.-based family-dining chain, which has more than 1,500 units.

Now in play are menu items like High Diving Veggies, or fresh carrots, celery and cucumber with ranch dressing, and Tumbling Vanilla yogurt with strawberry topping. Gone is Big Dipper French Toastix, replaced with a new finger food, Slam Dribblers. The latter "still gives all the interaction of the dipping and the fun of the French Toastix," Lykins noted, but with fewer calories.

At the same time, kids' French fry orders have fallen by more than 50 percent. Denny's menu photography no longer depicts fries as the default side dish for kids' meals, showing fresh apple slices with caramel sauce, grapes or fresh raw vegetables instead.

"We've found a lot of kids are gravitating anyway toward the Apple Dunkers, the grapes or the typical vegetables," said John Dillon, vice president of marketing and product development.

"They're trying to find ways raise the price point on a kids' meal that is way below what the average an adult would spend," he said.

Still, chicken fingers, pizza and burgers reign supreme among young customers at Loop Pizza Grill, a 19-unit fast-casual chain based in Jacksonville, Fla., according to director of marketing Cathy Manzon. That said, she noted that steamed vegetables are now available for kids, and some units offer fresh fruit, skim milk and a greater selection of sugar-free fountain beverages.

"The business we get at 5:30 and 6 p.m. is a huge part of the reason we are successful," said des Rosiers. "A lot of places have a hard time getting customers in early."

He noted that his kids' meals use the same local, sustainable and artisanal ingredients that make up his grownup dishes. For example, a kids' cheeseburger sports grass-fed beef, Wisconsin cheddar and a brioche bun. His spin on chicken nuggets is organic chicken breast coated with pulverized grits for a popcorn flavor.

Parents "are really happy with this and they bring their kids here because of it," des Rosiers said

Families en route to a show are a source of business for South Water Kitchen, a casual-dining restaurant in Chicago's theatre district.

"When a play is running that appeals to kids, like 'Wicked' or "Billy Elliot,' I get quite a few calls from parents asking if we have a kids' menu," said Bob Bracy, general manager of the Kimpton Hotels & Restaurants spot.

South Water Kitchen's kids' meals are served in lunchboxes and include an entree like a cheddar cheese panini or grilled chicken skewers along with soup in a thermos, housemade potato chips, an organic apple and a butterscotch blondie.