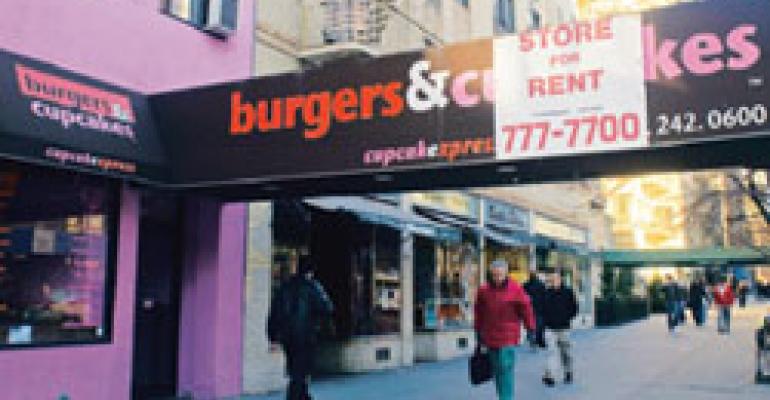 Real Estate: The art of the deal

Even with signs pointing toward a gradual economic recovery in 2010, industry observers say real estate remains a hurdle that cash-strapped operators still must clear.

At the same time, though, retail vacancies persist and landlords are looking to strike deals to keep their tenants satisfied and able to pay the rent. As a result, some restaurateurs are finding themselves on the receiving end of previously unavailable leasing opportunities.

Vacancy rates of retail sites were expected to top 12.6 percent in the fourth quarter of 2009, and rents were projected to decrease approximately 1.3 percent, according to research collected by the National Association of Realtors. The research concludes that more of the same is expected throughout 2010.

Consequently, landlords looking to retain their current tenants or lease their now-empty storefronts are more amenable to negotiating or restructuring deals.

Those deals can include such perks as rent reductions, shorter and more favorable leases, or payment of tenants’ broker’s fees. But in order to take advantage of those deals, operators must be prepared to negotiate.

Negotiation—Greg Apter, president and chief operating officer of Hilco Real Estate, a Northbrook, Ill.-based repositioning specialist, has seen a number of restructuring deals go down in 2009, and some of them have included provisions calling for six months to one year of free rent in exchange for the tenant footing the cost of improvements or remodeling of the space.

“It’s a supply versus demand issue,” Apter said. “If the supply [of locations] is increasing and the demand is just not there, that drives down the prices. Landlords need cash flow to cover their debt service.”

Apter says he does not expect to see much improvement in the market in 2010.

“There is additional downward momentum in the restaurant world that will play out in the first quarter of the year,” he said. “There will be additional pressure [on tenants] to pay these rents and, by the same respect, landlords won’t be able to meet their debt requirements. This is creating real angst out there.”

“A lot more restaurants are closing here than opening,” Glasgall said. “Still, there is something magical about owning a restaurant. So even though it’s very hard to get institutional financing, a lot of chefs and entrepreneurs are finding [private] investors. But they need landlords to give some free rent to get them going. Generally today they’re giving at least six months—enough time to build out and even a bit of free rent when they open.”

Tom Mullaney, founding partner of Huntley, Mullaney, Spargo & Sullivan, the Roseville, Calif.-based turnaround specialist, said landlords are more willing to play ball with financially challenged tenants if the tenants are honest about their liquidity problems and have a plan to improve the situation going forward.

“As I survey the battlefield, it is still an ugly operating world out there,” Mullaney said. “Vacancies have gotten so great that landlords have been backed into a corner. They literally are at risk of defaulting on their own mortgages. And while most people beg for rent relief, their pleas usually fall on deaf ears. Landlords are businesspeople; you have to show them how they’ll be better off by restructuring their contracts with you rather than to simply do nothing.”

Strategy—“Step No. 1 is to immediately, and in a just-the-facts way, go to the landlord and demonstrate what the problem is and then come up with a proposal that is a two-way street,” he said. “Generally, you need to figure out what is wrong with the location, how to fix it, and come up with a plan to fix it and share that with the landlord.”

If that doesn’t work, Mullaney added, threatening to close the location or default on the contract might be used as leverage, although he does not encourage or recommend the use of those tactics since they oftentimes are loaded with legal entanglements.

“In this environment, the primary source of leverage is to close the restaurant,” he said. “With the vacancy rates soaring, landlords don’t want that. The second thing is to default on the contract and stop paying rent. However, this is fraught with legal significance and needs to be approached very, very carefully. I prefer to use the carrot rather than the stick, as it is a much more productive way to restructure a contract than to close stores or default on leases.”

Action—Despite the turmoil in the economy and the real estate market, some well-capitalized operators are taking advantage of deals available to them. Darden Restaurants, the Orlando, Fla.-based parent of Red Lobster, Olive Garden, LongHorn Steak House, The Capital Grille and Seasons 52, plans to expand into several markets throughout 2010, said company spokesman Rich Jeffers. In fact, Darden opened a new Capital Grille location near New York’s Wall Street in October. In all, he said, Darden will open between 50 and 55 new restaurants in fiscal 2010 in such markets as Arizona, Colorado, Illinois, Massachusetts, Mississippi, New Jersey, New York, Pennsylvania, Virginia and Wisconsin.

“There are some opportunities, especially in higher-end markets, properties that might not have been as attractive in the past as they are in this environment,” Jeffers said, “and that’s because the price came down.”

Jeffers said the new Capital Grille in New York is a rental location even though Darden prefers to acquire the properties on which the majority of its restaurants are situated.

Ownership—Dennis Riese, president and chief executive of the Riese Organization, a New York-based, multiunit operator of such brands as Tim Hortons, Pizza Hut and T.G.I. Friday’s, said he now purchases properties rather than rents them.

“The formula the Riese Organization follows these days is the most lucrative and profitable we’ve ever had,” he said. “It’s a large departure from our past. Primarily, we’re looking to acquire properties to put our own restaurants in. It’s very rare that I’m interested in leasing properties from other landlords. It’s more a matter of what types of properties we’ll have an opportunity to acquire.… That’s really the bottom line.”— [email protected]