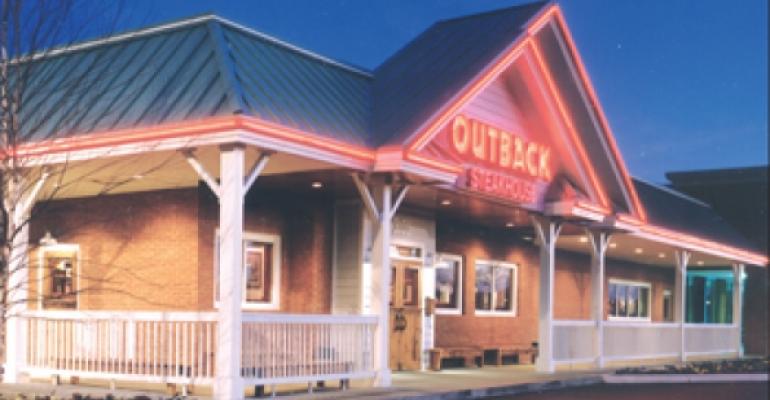 OSI to focus on flagship brand as private entity

TAMPA, FLA. OSI Restaurant Partners Inc. plans to end its run next month as one of the industry’s most-watched public companies when a $3.63 billion buyout of the Outback Steakhouse parent is expected to gain shareholder approval. —

The operator of franchisor of 1,429 restaurants under eight brands has said that under the new ownership of private-equity firms Bain Capital Partners LLC and Catterton Management Co. LLC, OSI will focus on a turnaround of the 953-unit Outback chain, which has struggled since 2005. Most industry analysts agree that OSI is better off regrouping as a private outfit than as one forced to heed shareholder demands. —

Tampa-based OSI said previously that it would slow unit growth of the Outback chain, reimage restaurants and continue testing new menu formats introduced earlier this year that were designed to broaden the concept’s appeal. The company also said it plans to continue growth at its developing brands, including Carrabba’s Italian Grill, Bonefish Grill and Fleming’s Prime Steakhouse & Wine Bar. —

Still, a return to the public markets—or a breakup of the company and subsequent initial public offerings—could be just around the corner, some observers contend. —

“Given the OSI buyers’ restaurant industry track record, and following stabilization of operating trends, we suspect that IPOs for some of the company’s ‘growthier’ brands—Carrabba’s, Bonefish and Fleming’s—could potentially occur as early as late 2008,” Morgan Keegan & Co. Inc. securities analyst Robert M. Derrington said in a February research note. —

A breakup of OSI would be ironic, considering the unsuccessful pressure last year from activist investor Pirate Capital to boost shareholder returns through a spin off of OSI’s noncore chains. —

Last November when OSI first announced the buyout, chief executive Bill Allen said it planned to remain intact and that the private-equity owners approved of its strategic positioning and rewards of equity to unit-level partners. —

“The public markets at this time don’t allow us to take care of our people at the level we want to,” Allen said in an interview at the time. “There is such a level of impatience…and at a time when a company is struggling with top-line growth… We’re big spenders in taking care of our partners…and we’re able to continue that as a private company.” —

But armed with recent corporate reports on brand-specific profits and returns, some prospective buyers are likely to begin eyeing OSI’s growth chains, which could provide exit strategies for the new owners. —

“Immediately after the buyers [agreed to buy OSI], red flags were raised to interested parties in the company’s developing brands,” said Craig T. Weichmann, a former restaurant stock analyst and now founding partner of the Dallas-based boutique investment bank Weichmann & Associates. “It invites conversations from other groups that might come knocking.” —

Last month OSI revealed in public filings that most of its restaurants, including the smaller chains, produce “attractive returns,” one analyst reported. —

OSI also revealed that cash-on-cash returns on investment among units developed between 2001 and 2005 were 33.6 percent at Outback, 35.3 percent at Carrabba’s, 30.1 percent at Fleming’s and 29.8 percent at Bonefish. —

“Here you have an asset-rich company that, like many restaurant chains, has been criticized in the marketplace,” Weichmann said. “It is a prudent move to take it out of the public domain, orchestrate the game plan the company has developed and then take the next step. The next step can be to reenter the public market…or the disposing of developing brands.” —

The buyout includes participation from Outback’s founders and management, including Chris T. Sullivan, Robert D. Basham and J. Timothy Gannon. But the biggest stake would be held by Bain, in exchange for its $853 million. —

Boston-based Bain, which manages $40 billion in assets, typically has purchased underperforming brands like Burger King and Domino’s Pizza, coordinates turnarounds and then cashes out successfully through initial offerings. —

Bain received at least one-third of the nearly $400 million dividend that was paid to Burger King’s private-equity owners prior to its IPO in early 2006. The payout put Texas Pacific Group, Bain and Goldman Sachs Capital Partners in the black on their investment, as they reportedly shored up $325 million in equity as part of the $1.5 billion BK purchase in 2002. —

Bain continues to hold a majority ownership in Domino’s Pizza Inc. and in 2005 was part of a group of three private-equity companies that purchased Dunkin’ Brands. In October Dunkin’ announced it was shedding its Togo’s sandwich chain and had hired Trinity Capital to shop the concept to potential buyers. —

OSI already has laid out an Outback turnaround plan, including experiments with a value menu in the Midwest, new advertising, the remodeling of corporate restaurants and new menu variety. —

Among the newer items at some locations are Dijon Chicken & Bacon Lettuce Wraps and a Seared Ahi Tuna appetizer. In addition, the menu’s wording was simplified, such as renamings of the Ayers Rock Strip and Ribs on the Barbie, now called New York Strip and Baby Back Ribs. —

“After many moons with minimal menu innovation, Outback’s recently debuted, reformatted menu…is clearly a first step in the right direction,” Derrington noted. The chain also changed its pricing, charging more for soups, salads and entrées while reducing prices of appetizers, fish and steak dishes. Overall, prices decreased about 4 percent, to an average of $9.17 in at least one market, which will help improve consumers’ value perceptions, Derrington said. —