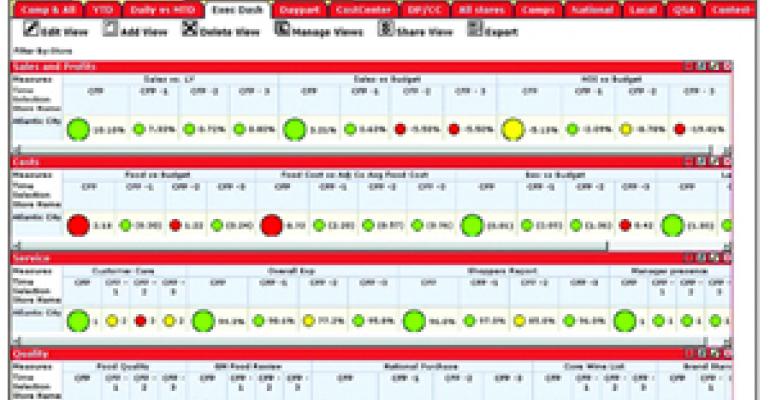 Eager to sift through the blizzard of operating and financial data that swirls about a restaurant chain, some multiunit operators are turning to sophisticated above-store reporting, or ASR, systems for decision-making guidance.

ASR is the practice of collecting point-of-sale and back-office data from multiple restaurants for analysis and performance comparison. Systems automatically examine transactional data and other key information on a real-time or regular basis according to preset metrics, sparing operators from sweating over spreadsheets. Thus, users say, ASR transforms raw data into something more palatable and digestible—timely, actionable business information.

“If I added up the hours it cost me per year to process reports manually, it would come to [a value of] $40,000 or $50,000,” said Shawn Taylor, president and chief executive of Family EATS, a 28-unit, Houston-based Taco Bell franchisee and Pizza Hut licensee. His organization adopted ASR in 2003 by subscribing to xFormity’s QSRx service. “My annual cost today doesn’t come close to that, and it has made a huge difference for the company.”

What’s more, improved ASR has helped reduce Family EATS’ labor cost from nearly 30 percent to 27 percent and cut its cost of sales from 31 percent to 28 percent, according to Taylor. “This year, we’re right at $27 million [in annual sales], and 3 percent of that is a nice chunk of change,” he said.

Taylor said xFormity’s remotely hosted technology and application service provider model means his return far outweighs his cost, as his monthly subscription payment is $50 per unit. He adds that he was not required to pay any fees upfront or to invest in additional computing infrastructure.

Among the current trends in ASR is a greater emphasis on exception-based reporting, in which real-time alerts go to management via e-mail or cell phone message when important business events occur. Also more prevalent these days is the use of so-called “dashboards,” or concise digital summaries of information, often graphically oriented, for a quick read on performance.

At Family EATS, twice-daily e-mail exception alerts notify Taylor if a store misses a sales goal or if there are cash register irregularities, such as excessive cash over-ages or shortages, employee meals or deletions. He explained that the latter are erroneous rings, a possible indication that someone is intentionally voiding orders and pocketing the cash.

Taylor taps the QSRx-generated sales growth report to see sales data on a year-to-date, week-to-date and period-to-date basis across markets, areas and individual stores. The system’s “closing report” keeps tabs on a store’s sales in 30-minute increments. Strong business at the end of the night suggests that a store may be ripe for extended hours. In one case, a Family EATS store went from closing at 1 a.m. to 5 a.m. for a big sales and profit gain, Taylor said.

Moving beyond a dashboard view by “drilling down” into reports can help managers spot bothersome trends. For instance, Taylor said, drilling into a labor report might identify “blown labor hours,” or waste resulting from employees’ failure to clock out for breaks.

E-Global guides TRC management with a variety of performance reports, including one that helps manage Arby’s core menu item, roast beef. The beef-cooking activity report taps POS information to track the amount of beef ready to serve and alerts the manager when more of the protein must be cooked—a three-hour process—to meet predicted demand.

Before e-Global, beef forecasting consisted of a calculator and a hunch, said TRC president Bill Lowe. “Now the report tells the manager [such things as] put five roast beefs in the oven at 1 p.m.,” he said. That improved forecasting and production guidance leads to higher quality product and less waste, he indicated.

“It was a tremendous investment for our small company, $450,000 total, including the POS, back-of-the-house systems and e-Global,” Lowe said. “That’s why we shopped for several years.”

“Right off the bat, we saw significant savings in areas where we lost money,” said Jeffrey Hall, director of information technology for HMC. “We were probably saving $10,000 per year per restaurant, in a rough estimate.”

QSRx’s timely information can prove valuable. “We know by 7 a.m. the next day if a store overspent on hours the previous day, in time for the schedule to be changed,” Roe said. Back in the days of manual reporting, he noted, managers did not get the preceding day’s numbers until the following afternoon, leaving little time for margin-saving fixes.

For example, the dashboard’s Sales and Profits metric breaks out sales versus last year’s numbers, sales versus budget and sales versus net operating income. That information is available for the current financial period and the three preceding periods. Each period is marked with a color-coded stoplight symbol—green for good performance, yellow if there is concern and red signifying a problem. The same coding is used with other metrics, including those dealing with costs, service and quality.

“The red and green [icons] really jump out at you,” said Kelly McCardle, information technology director of Palm Management.

Three years ago, Noodle Bar Inc. of San Francisco, operator of six Zao Noodle Bar casual Asian restaurants, cast its ASR lot with Decision Logic, a hosted application service provider. “I like that it gives us the ability to compete with large national chains,” said Matthew Baizer, president and chief executive officer. “We can focus on opening restaurants rather than hiring IT people.”

In one case, functioning as middleware between the POS system and procurement software, Decision Logic reports helped Noodle Bar Inc. identify and recapture a substantial amount of food cost losses. Baizer said the ideal versus actual—or “IvA”—food cost report showed a variance of $184,000 between the amount of food that should have been used and the actual usage. The variance was likely due to over-portioning, waste, spoilage, poor inventory or some other correctable problem, he said.

“After realizing that we were leaving that much in costs on the table, we were able to recapture about $145,000,” said Baizer, who further indicated that even after deducting the annual cost of the Decision Logic service, the net improvement was a six-figure sum.