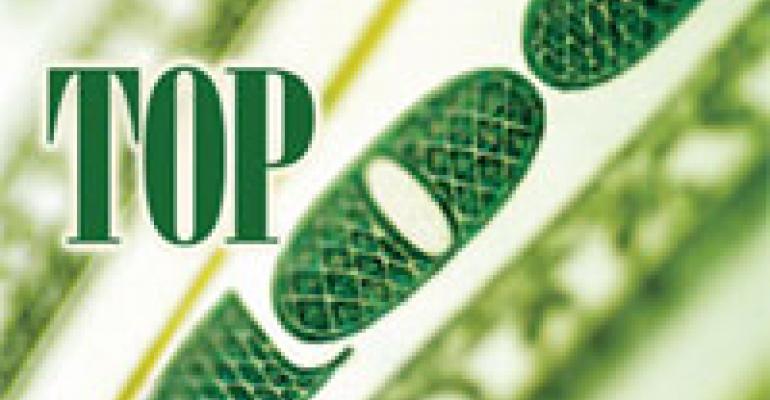 NRN’s annual three-year look at the unit development and sales performance of the 100 largest foodservice chains, as ranked by annual U.S. systemwide sales, paints a picture of an industry whose forward motion not only sputtered to a halt for the first time in recent memory, but teetered precariously on the precipice dividing progress and regress.

Here is a small preview for our subscribers. For non-subscribers or those who wish to purchase the full report in PDF form, click here.

The 37th edition of Nation’s Restaurant News’ annual Top 100 report, which appears in the June 28 issue, is the first installment of a comprehensive two-part study, generated through exclusive research by the editors of the publication.

The Top 100 report and the forthcoming Second 100 report provide a detailed, brand-by-brand assessment and three-year performance comparison of individual organizations that together tally nearly 41 percent of the estimated $580 billion U.S. consumer foodservice market.

The two-part Top 200 study is NRN’s annual endeavor to compile and rank results of the industry’s cash cow brands and corporations. This year’s reports give readers a panoramic view of the market battles being waged for the hearts, minds and dining budgets of America’s consumers.

The Second 100 report, with its data for chains and companies ranked Nos. 101-200, will be released in the July 26 issue of Nation’s Restaurant News.

More focused than other rankings of the industry’s largest organizations, Top 200 seeks to present relevant comparisons of the largest foodservice competitors by tracking only consumer foodservice sales and revenue generated in the United States. Parallels therefore exist between the federal government’s shift in emphasis from gross national product, which included overseas results of U.S.-based multinationals, to the gross domestic product standard for assessing today’s downtrending economy.

In addition to excluding foreign results, the Top 100 and Second 100 reports factor out business activities not directly related to consumer foodservice. For example, McDonald’s Corp.’s estimated $1 billion-plus in annual revenue derived from franchisees’ rent payments, contract foodservice companies’ revenue from facilities maintenance, or franchisors’ sales of equipment or food items to their own franchisees are not included. By virtue of an apples-to-apples focus on food-and-beverage- generated sales, the overall study by the editors of Nation’s Restaurant News yields what we believe is a more relevant appraisal of U.S.-market warfare among the industry’s leading combatants and the fast-advancing second-tier forces.

Top 100 and Second 100 provide data on publicly owned and private companies in all commercial and contract sectors.

Top 100 and Second 100 are analytical tools that can help define which chain concepts and market segments are prospering or struggling and where consumers are spending their dining dollars in this harshest of environments.

As the basic criterion for inclusion in Top 200’s statistical universe, the study first ranks individually branded chains on the basis of domestic systemwide sales for their most recent fiscal years ended closest to Dec. 31, 2009.

Separately, companies are ranked on the basis of their domestic foodservice revenue. Qualifying organizations then also are assessed over a three-year span on the basis of their sales and revenue growth rates, estimated annual average sales per location, growth in average sales per location and rates of expansion in total outlets and franchised units.