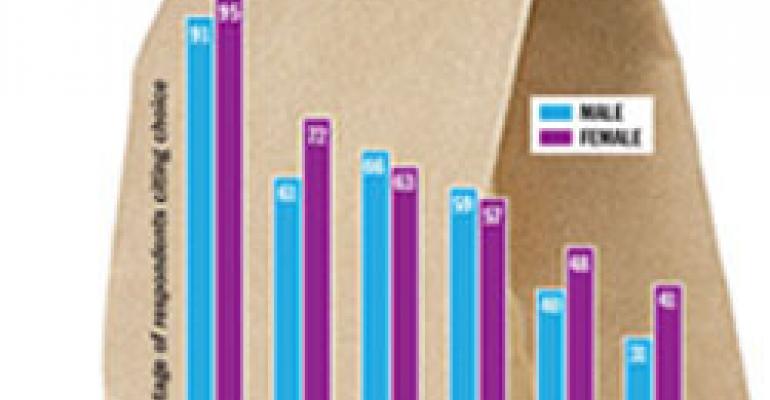 Consumers have a brand new bag—a brown bag, that is.

Americans say they are “brown bagging” their weekday lunches more frequently because of financial concerns. But a new study from market research firm The NPD Group reveals other motivations as well, such as health and nutrition concerns, a desire for better-tasting food, a greater need for convenience, and heightened environmental concerns. And knowing what’s in those lunch bags can put operators in a better position to compete, NPD officials say.

Consumers are brown bagging more than they did as recently as last year, according to new NPD data. In 2007, Americans brown bagged an average of 38 times per person, up from 35 times per person in the previous year.

“Part of this is financial, but part of this is [that consumers] think they can eat healthier, with more variety, quicker and easier [by brown bagging],” said Bonnie Riggs, an analyst at Port Washington, N.Y.-based NPD. “A major challenge for foodservice operators is to overcome the perception that ‘what’s in the bag’ is better, fresher than [food] ordered from a restaurant.”

“Beyond financial concerns, health and nutrition is the next biggest reason people are brown bagging more,” Riggs said.

Adults surveyed who cited financial reasons for carrying their lunch from home more frequently cited the following reasons: brown bagging was cheaper, they are trying to utilize leftovers because of high food costs, bringing food from home represented a better value, and they are cutting down on driving because of high gas prices. According to the data, women are more inclined than men to bring lunch from home because they are watching their spending and using leftovers more to offset high food costs.

Not only do consumers have less money to spend at lunch, but many also have less time in which to eat it, NPD found. Among adults who brown bag, nearly 20 percent said they have less time for weekday lunches than they did a year ago. Of those who said they had less time for lunch, 42 percent cited their work schedule and nearly 40 percent cited having more work to do as key reasons. Other top reasons included more places to be each day, class schedules, running errands during lunch, company meetings and company-shortened lunch times.

Sandwiches are the most popular food item when it comes to brown bagging at lunch, NPD found. In the two years ended November 2007, a sandwich was in the bag 47 percent of the time for men and 29 percent of the time for women. For men, the top 10 foods also included fruit, salty snacks, vegetables, cookies, yogurt, frozen dinners and entrées, crackers, salads, and snack bars. For women, the top foods also included fruit, yogurt, salty snacks, salads, vegetables, frozen dinners and entrées, snack bars, crackers and soup. As compared to the total population, women were above average when it comes to packing yogurt, salad and frozen dinners at lunch.

Time and convenience clearly are issues for the brown-bag brigade. As homemade dishes lose share, fresh and ready-to-eat items hold steady, and refrigerated and frozen options gain greater share of what consumers pack in their brown bags. In the year ended November 2007, less than 60 percent of brown-bagged weekday lunches included a homemade item, down from 70 percent a decade ago. Fresh and ready-to-eat items remained in about 40 percent and 70 percent of brown-bagged lunches, respectively. In contrast, 10 percent of all brown-bagged lunches included frozen dishes, up from just 6 percent a decade ago. During the same period, refrigerated items grew to 12 percent, up from 9 percent.

“Don’t try to mimic the food in the bag, but respond to the motivations of the brown bag,” said Dennis Lombardi, executive vice president for Columbus, Ohio-based WD Partners, a consulting firm specializing in design and development. “Then provide a food that doesn’t brown bag well. A craveable,’ low-price-perceived, fresh-perceived [product] that they don’t have the ability to brown bag.”

One opportunity Lombardi sees is yogurt, one of the most popular brown-bag lunch foods and traditionally something that restaurants only offer at breakfast.

“Yogurt has some opportunities that so far haven’t been explored, at least not fully,” Lombardi said. “[Operators] need to find a way to bring yogurt in at the right scale and portion at lunch.”

Among those operators taking inspiration from the bag is Philadelphia-based Aramark, which has more than 500 client families in business and industry sites in the United States, Puerto Rico and Canada. To entice brown-bagging consumers to eat at or pick up lunch from one of its on-site restaurants, the company recently launched a limited time offer called the $4.99 Special.

“[Brown bagging] has been on our radar screen for a while,” said Heidi Hogan, Aramark’s associate vice president for marketing.

Based on Aramark’s new brown-bag research, the special was designed to appeal to consumers who want a lunch that is either healthy or value-priced or features ethnic cuisine, Hogan said. The initial offerings were similar to what consumers might bring from home only with a twist, including a blackened-tuna ciabatta sandwich served with red-skinned potato salad and black beans; a grilled BBQ brisket sandwich with country slaw and French fries; and a Moroccan grilled chicken with couscous. The limited-time offer was so well-received that Aramark recently made it a permanent menu offering and rolled it out nationwide.

In addition to the special, Aramark also is making sure it stocks such grab-and-go items as cottage cheese and fruit and yogurt parfaits as add-ons for consumers who simply won’t kick the bag habit.

“Some folks we’ll never convince to not bring a brown bag, but we can certainly complement what they are bringing from home,” Hogan said of Aramark’s add-on strategy.

While some operators are tweaking their menus, others are focusing on educating consumers about their existing lunch offerings and finding more convenient ways to get them into consumers’ hands.

For instance, Atlanta-based HoneyBaked Ham, best known as a provider of ready-to-eat hams and turkey breast for holidays and special events, also is making sure consumers are aware of its lunch offerings, such as made-to-order sandwiches and box lunches. Among the tactics is the 425-unit chain’s Hambassador program, which uses local representatives to bring lunch offerings to potential customers to sample.

“Getting out at a grassroots level has been one of the most important parts of growing our lunch business,” said Craig Kurz, president of the national board of directors for HoneyBaked and grandson of the company’s founder.

HoneyBaked also has been focusing on giving consumers easier and more convenient ways to get its products by increasing the marketing of its delivery services and testing online ordering systems.

“In the last decade or so, our system has embraced what lunch can be for HoneyBaked,” Kurz said. “Delivery is an important component of that.”

But no matter what approach operators take, experts say, it won’t be easy to get consumers to let lunch out of the bag.

“Lunch is going to remain a very important daypart for foodservice operators,” Riggs said. “But to keep it growing and profitable, it’s going to take more work than ever before.”