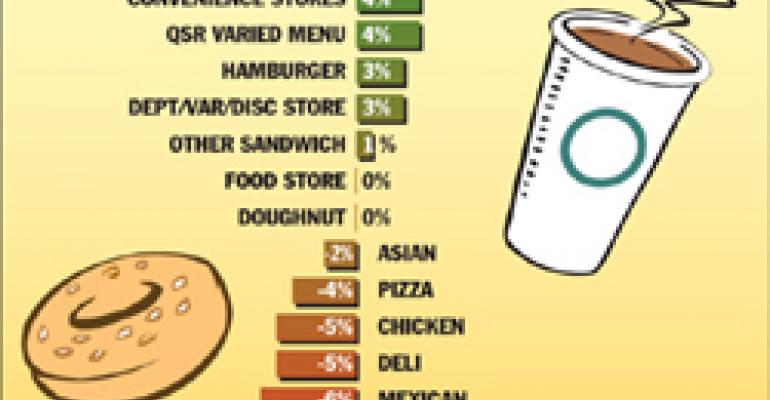 And while some industry observers and Wall Street analysts doubt that low-price-point promotions will pull the segment out of its yearlong slump, new data gathered by The NPD Group, a Port Washington, N.Y.-based market research firm, indicates that such value promotions are a step in the right direction.

“Based on our consumer survey, I think they are on target with what they’re doing,” said NPD analyst Bonnie Riggs. “If you are going to drive traffic, you really need a value strategy.”

Despite strong gains a year ago, traffic has slowed across all segments, NPD said.

Traffic at casual-dinnerhouse chains appeared stable, but it has not kept pace with unit expansion. Taking unit increases into account, chain traffic decreased 7 percent during the quarter ended February 2007.

Though traffic also was flat at independent casual dinnerhouses during the same period, the closing of a small percentage of stores resulted in a 3-percent increase on a perstore basis.

The behavior of some of the chains’ customer base has contributed to the recent traffic slowdown. Adults ages 25 to 34, the heaviest users of casual-dinnerhouse chains, have curbed their visits the most. During the quarter ended February 2007, this group accounted for a decrease of 1 percentage point in traffic over the same period the previous year.

Young people under 18, adults 18 to 24 and adults 35 to 49 remained loyal, visiting nearly as often this year as last. Adults 50 and older increased their visits by 1 percentage point over the previous year. The increase in visits by older adults, however, was not enough to offset the decrease in visits by the heaviest users, Riggs said.

Although adults between the ages of 25 and 34 cut back on visits to chains, they continued to visit independents. Young people under 18 decreased their visits by 1 percentage point, as did users between the ages of 35 and 49. Yet adults over 50—the heaviest users of independents—and adults 18 to 24 increased visits by 1 percentage point each. While independents experienced some weakness among 35- to 49-year-olds, the increase in visits by the heaviest users made up for it, Riggs said.

Affluent consumers, or households earning $75,000 or more each year, are the heaviest users of all casual dinnerhouses. Although these consumers continued to visit chains and independents, all other income groups cut back during the quarter ended February 2007.

Though consumers have cut back on their frequency of visits, many still find a lot to like about casual-dinnerhouse chains.

When asked about satisfaction with their experience at casual-dinnerhouse chains, consumers gave the highest ratings to food-related elements, such as “accuracy of order,” “taste and flavor of food,” and “quality of food.”

Still, many consumers are unhappy about how casual-dining chains empty their wallets.

According to the NPD data, among 21 consumer satisfaction attributes, “affordable to eat there often” and “provided good value for the money” rank the lowest among all casual-dining chains. The data also reveal that consumers are more satisfied with the affordability and value at independents than at chains.

NPD attributes the cutback on visits to casual dinnerhouses primarily to economic factors, including rising gas prices and the increasing number of low- to mid-income households defaulting on sub-prime mortgages.

According to a recent online survey of lapsed casual-dining consumers conducted by NPD, consumers said their top reasons for visiting less often were “eating at home more” and “trying to better manage expenses.” Top restaurant-related reasons cited by the nearly 8,000 respondents included “prices are going up,” “[prices] are too high,” “not a good value,” and “not offering coupons, promotions, or specials.”

“In this market, you can’t keep increasing prices and expect to drive traffic,” Riggs said.

Chains such as Applebee’s, Chili’s and O’Charley’s are among the growing number of casual operators responding to consumer cost concerns by offering value-based promotions.

Value promotions have been highly successful for major quick-service chains. While only a few quick-service categories are growing, the hamburger category is thriving, according to the NPD data. During the quarter ended February 2007, the hamburger category grew 3 percent from a year ago. Though the increase is only a single digit, with the category accounting for 30 percent of all quick-service traffic the impact is huge, Riggs said. According to NPD, 70 percent of that growth can be attributed to consumers ordering from dollar menus.

Casual operators might take a value cue from quick-service competitors, but you won’t find any dollar menus at their restaurants. Instead, the majority of operators adopt value strategies that feature portion control, offering smaller, cheaper items.

Greenville, S.C.-based CityRange Steakhouse Grill introduced its City Savors dinner promotion in January. The promotion features smaller, lower-priced versions of some of the three-unit chain’s best-selling menu items, including a petite filet, a crab cake and a pork chop.

While the program hasn’t increased traffic yet, CityRange co-owner Cory Wilk said it has helped the chain maintain its market share better than it could have without it.

Similarly, T.G.I. Friday’s in March launched its Right Price, Right Portion menu. Consumers choose from 10 items that are one-third smaller than a normal portion for $6.99 to $8.99.

While he declined to offer specifics, Archer said Friday’s, which has 582 domestic units, has been pleased with the traffic increases so far.

“As long as we keep listening to what the guest is telling us and reacting to it, the future for casual dining will be very bright,” Archer said.