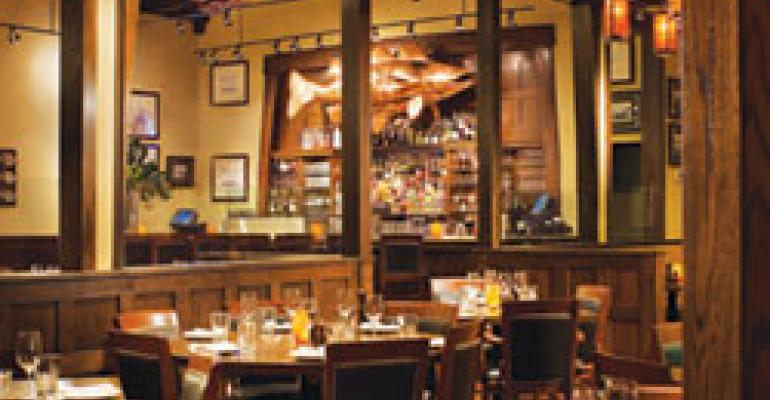 Newport Group strives to do right by its young guests, staff

Total No. of Units: seven restaurants; one catering division

We all want to do the right thing, but the Newport Restaurant Group takes it a step further, making a core value of the Mark Twain quote: “Always do the right thing; this will gratify some people and astonish the rest.”

“It’s unusual to have our level of philosophical commitment,” said Paul O’Reilly, president and chief executive of the seven-unit group that also owns Blackstone Catering. “We’re probably cutting edge here on the East Coast when it comes to environmental issues, and the primary reason is to engage young employees and bring more meaning to their jobs. It helps us attract and retain people.”

In 1995, an Employee Stock Ownership Plan, or ESOP, was adopted and began acquiring stock from those shareholders wishing to sell. Today, the ESOP owns about 46 percent of the corporation, with the remainder held by descendants of the original owners.

Employees who work a minimum of 800 hours in a calendar year earn an interest in the trust based on their salaries or wages that year.

The success of Newport Restaurant Group is built on “the success of each employee,” O’Reilly said. The company, which spent much of the past five years developing an infrastructure and opening new restaurants, is adopting a new stance toward growth that is expected to move it beyond its Newport base into southern Massachusetts and Greater Boston.

Adivision of the Newport Harbor Corp., which owns marinas and manages events, NRG was created two years ago as an umbrella for the company’s growing group of restaurants.

“Our culinary philosophy of providing an unparalleled dining experience extends to all our restaurants and can be applied to all segments,” O’Reilly said.

“In the next two or three years,” O’Reilly said, “we will head into the Boston area after riding out this economy. There are only a few sites left here that offer strong lunch and dinner business potential. We’ve already begun scouting Boston and the outskirts to learn the market there. It will be a sophisticated, comfort food concept. We want to be sure we have the capital to grow.”

As many struggle with the challenges of the recession, NRG has adjusted its model in response to slowing sales volumes.

“For a long time, we had the benefit of a strong economy, and it was hard to see that engine slow down,” O’Reilly said. “In 2008, we began to adjust our menus to the flattening level of sales. It’s important to adjust to demand, and we were able to hold onto our business.

“People still want to go out to eat, and they’re still coming. We are seeing significant cutbacks in corporate spending and travel this year, though, and that’s had a negative impact. It will come back, but probably not until after 2009. This summer we expect to be flat or down slightly.”

O’Reilly remains optimistic about the industry, saying: “The trends have been very much in our favor. People today go out more today than in my parents’ generation. The boomers are a powerful presence. We will get out of this economy, and the Food Network lifestyle won’t change. Eating at a restaurant is a part of our customers’ lives, and the restaurants they eat at reflect who they are.”

Recently, however, O’Reilly has witnessed a “psychological shift” among consumers to which operators must adjust: the desire for value.

“We have to give our guests something they want yet not alienate loyal customers,” he said. “We want to attract people who might not have been able to afford our restaurants before. This is about creating value on the plate at lower price points, and it is both an art and a science. You need to put a lot of thought into any changes you make.”

Responding to market shifts, NRG’s high-end Castle Hill Inn & Resort presented “culinary indulgences without extravagant prices” this winter with a two-course lunch for $19 per person and a daily offering of champagne and oysters priced at $10.

Initially, Castle Hill offered on-premise catering, he added, but with the acquisition six years ago of Blackstone Catering, “we learned a lot about what we didn’t know about off-premise catering — they are two different animals.”

Today, O’Reilly said, people are becoming more interested in the sources of their food.

“Especially on the fine-dining side, people are tuned into where food is coming from, and they expect their server to know,” he said. “Another major change is the search for upscale comfort food with a thoughtful and creative presentation. They’re not looking for intense complexity. And Asian ingredients are becoming more accepted.”

“We’ve had a handful of clients,” O’Reilly said, “and we’re dipping our toes into this. We have a strategic alignment with them with our upscale food and beverage experience, and they bring a deeper level of hotel management.”

On the environmental front, the company was the first in the state to pay a premium for electricity, purchasing renewable energy credits, O’Reilly said.

“We create demand for wind farms to sell on the grid,” he said. “It cost an affordable amount, and it was the right thing to do. It also attracted and engaged both employees and customers.

“We also established a green committee two years ago to find ways to impact the environment and became [interested] in carbon offsetting, bringing the program to another level,” he said. “You know the actual farm where your credits are going, and the farm gets financing through the program. We wanted to be able to do more than just write a check.

“We’re also involved in beach cleanups and we publish a newsletter to promote conservation.”

In addition, the company’s used cooking oil is converted to fuel, and three of the restaurants — 22 Bowen’s, The Mooring and the Boat House — have the Rhode Island Hospitality and Tourism Association’s “green certification.”

At The Mooring, the restaurant saved an estimated 395,063 gallons of water a year or 32 percent of total usage. The establishment switched to low-flow aerators on all guest and kitchen hand sinks, flush-less urinals and controlled-flow pre-rinse nozzles at the dish station.