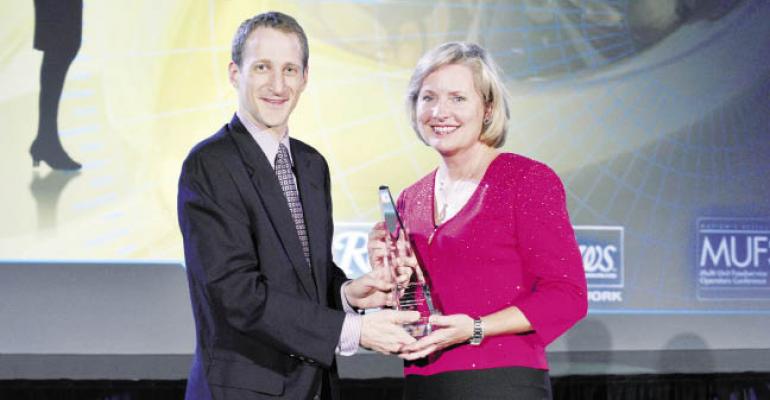 ﻿Seven industry leaders were celebrated for their career achievements during an upbeat and emotional gala party and awards ceremony the evening before MUFSO’s close.

In accepting the Operator of the Year award, Smith, who in 14 years at the helm of Buffalo Wild Wings has tripled the size of the chain to 700 units and notably outperformed casual-dining competitors throughout the recession, pointed to the importance of setting goals, listening, perseverance, hard work and gratitude.

“I want to say thank you to all the team members here tonight, including franchisees,” she said.

Smith also noted the increased optimism in the industry, and encouraged everyone “to drink beer, eat wings and celebrate sports.”

“My husband loved the people who gravitated to this industry,” Toni Brinker, Norm Brinker’s wife, said while introducing Brooks. “He encouraged and mentored several executives and challenged them to think beyond their job titles and offices.”

In a moving acceptance speech, Brooks said, “I will spend the rest of my career living up to this award.”

He explained the far-reaching impact Brinker had on the people who worked for him at all levels, explaining that Brinker always made sure employees understood why their job was important and what they would be accountable for. He also said that Brinker’s influence extended beyond his own company to other restaurant operations, noting that T.G.I. Friday’s, another Dallas-based casual-dining giant, had a meeting room named after Brinker.

“I humbly accept this award with great pride,” Brooks said. “And among a giant fraternity of restaurateurs, those who got to work with [Brinker], we are the lucky ones.”

John Y. Brown, who led the growth of the Kentucky Fried Chicken chain in the 1960s and helped create the modern restaurant franchising model, accepted the Pioneer Award. In his varied career, Brown also served as governor of Kentucky, co-founded Kenny Rogerºs Roasters among other restaurant chains, and owned professional sports teams.

Calling himself an “optimist,” he underscored MUFSO’s “Mission: Possible” theme by reminding attendees that they have the ability to find great success if they use the right strategies to capitalize on the trends of the day.

As he put it, “There is nothing so powerful as an idea whose time has come.”