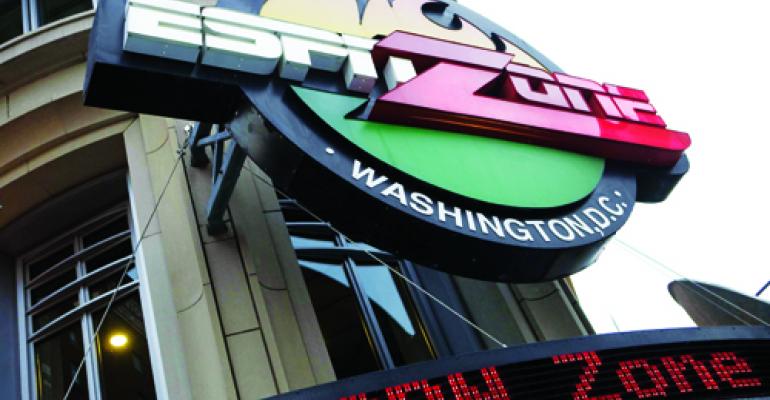 Most ESPN Zone restaurants to close

The only units that will remain open are the ESPN Zone in Downtown Disney outside the Disneyland theme park, which is operated by Zone Enterprises of Anaheim; and one at the downtown Los Angeles entertainment center LA Live, which is operated by AEG, said Rob Tobias, vice president of media relations for ESPN.

In a statement, Dominic Minniti, general manager of ESPN Zone, said, “the overall economics of continuing this operation were very challenging.”

Rick Alessandri, senior vice president of ESPN, also implied that the challenging economy was to blame for the closures.

“A decision like this is never easy,” he said in a statement. “The ESPN Zones have served as a terrific experience for fans across the country, but remain a long-term business challenge. We recognize and appreciate the commitment and years of service provided by our employees and would like to thank them, as well as our vendors and patrons, and all of the other great people that were essential in making the ESPN Zones a first-class entertainment and dining destination.”

ESPN Zone was designed as a family-friendly destination that would serve as a “3-D extension of the ESPN brand,” as officials described it early on.

The concept offered a spectrum of multimedia sports programming on high-definition TVs, as well as gaming arcades for children and a full-service American bar-and-grill menu.

Meanwhile, ESPN announced Tuesday that the network is launching a fleet of food trucks carrying big-screen TVs in a special promotion for the World Cup soccer championship in South Africa.

Dubbed the “ESPN Match Trucks,” the 24 vehicles will hit the streets in Los Angeles and New York from June 11-29, operating from 6 a.m. to 2 p.m. or 10:30 a.m. to 5 p.m. in high traffic areas. Fans can follow the trucks on Twitter or see their schedule and menu at www.espnwctrucks.com.

The trucks are equipped with high-definition LCD video screens that will broadcast the matches.

Famed food truck chef Roy Choi, known for his popular Kogi Korean barbecue taco trucks as well as his brick-and-mortar restaurant Chego in Los Angeles, has developed a “street food” menu for the trucks that includes dishes from the countries around the world represented in the global soccer event.

Dishes will include sliders, gyros and dumplings, as well as South African-style “bunny chow,” or breads filled with savory dishes.

Tobias, however, said the trucks are promotional vehicles specifically for the World Cup, and that no other event tie-ins are planned at this time.