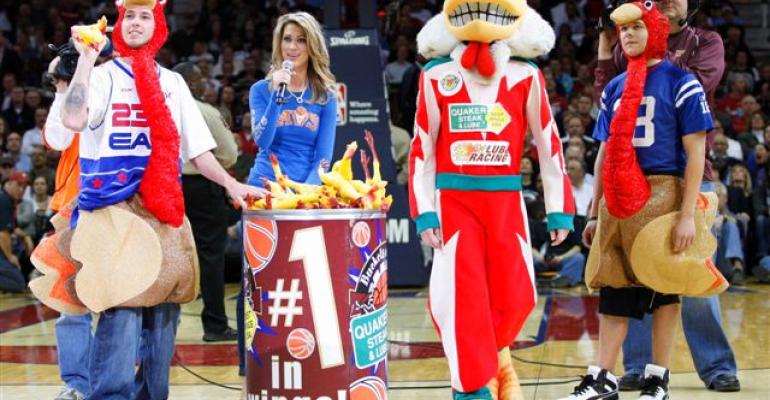 LeBron not only ticket for Cleveland operators

Like millions of sports fans, Michael Symon of “Iron Chef: America” fame tuned to ESPN last night to watch “The Decision,” the live one-hour special where basketball player LeBron James announced he was leaving the Cleveland Cavaliers to sign with the Miami Heat.

Symon said the decision depressed him, but only as a lifelong Cavs fan, not as a foodservice executive with operations in the Cleveland arena.

With ties to the Cavs and Quicken Loans Arena, known around town as “The Q,” Symon remains as optimistic as ever about Cleveland fans’ resilience. Contrary to media reports speculating that James will take the Cleveland economy south with him to South Beach, Symon believes his restaurants will be fine when the Cavs tip off without James. His operations include outlets of Bar Symon and B Spot, operated by Aramark.

“We’re busy whether there’s a Cavs game or not,” Symon said. “Even the things we do at The Q, we can’t make the burgers fast enough as it is. So I don’t see [James’ decision] really affecting business for us.”

Positively Cleveland, a convention and visitors bureau, told the Associated Press that each home game for the Cavs contributed an average of $3.7 million to downtown Cleveland’s economy in ticket sales, hotel bookings, souvenirs, and food and beverage sales, accounting for more than $150 million a year. Last night, while jilted fans burned replica James jerseys for TV cameras, local restaurateurs expressed concern to the Cleveland Plain Dealer that attendance at Cavs games would drop and sales at businesses near the arena would fall.

While James, a two-time NBA Most Valuable Player who grew up in nearby Akron, Ohio, unquestionably was the major draw, other operators in the area said aligning with the Cavs and the city still makes business sense.

Bob Mentrek, senior vice president of marketing and events of Sharon, Pa.-based Quaker Steak and Lube, said the chain was “obviously disappointed” that James chose to leave the Cavs. But the brand with eight locations in Greater Cleveland looks forward to continuing its marketing relationship with the team and its full-service restaurant and kiosk at The Q.

“We just renegotiated our contract with the Cavs and decided to stick with the team with or without LeBron,” Mentrek said. “They’ve built a great deal of brand equity in that market, and we felt it’s a strategic benefit to stay with them. The ownership and management have done a great job building the brand, and we’re confident going forward they’ll maintain a good presence in the NBA.”

Sales at Quaker Steak’s outlets at the arena perform comparably to the chain’s 36 other outlets, he added, and team-oriented promotions during Cavs games produce top-of-mind brand exposure.

Mentrek also noted that much of next year’s ticket sales for the Cavs’ 41 home games already are on the books, and the ownership group in charge of the team and The Q hosts two minor-league teams and dozens of headlining concerts as well.

“We just like the relationship with the team and with the Cleveland market,” he said. “We have eight locations in the area, and it’s a big deal to us to still maintain a presence there. Basketball’s not the only game in town.”

For Symon, The Decision — which joins The Shot, The Drive and The Fumble in Cleveland’s tortured history of sports suffering — stung more not for what it was but the way it was announced.

“As a Clevelander, I was watching this kid from high school through the pros, a lot longer than seven years, so it was hurtful,” Symon said. “Part of me says, ‘Thanks for a great seven years, and it was great for the city and good for business,’ but I think it could have been handled much better.

“I’ve met him and talked to him, and he’s always been a good and respectful guy to me, my restaurants and the city, and for that I thank him. But the way ‘The Decision’ was handled, for the first time we’ve seen him as a player, it made me realize that he’s only 25 years old.”

Ultimately, Symon and his fellow Clevelanders are tougher than tough times, he said, and the ESPN analysts predicting the demise of the city’s economy following the decision are misguided.

“I’m watching ESPN and listening to the people saying, ‘Here’s a city that’s barely surviving,’” Symon said. “God, have you even been here? Just walk down East 4th Street. There’s thousands of people spending money and supporting the city every night. Is it a really strong mid-major city with incredibly loyal people that care? For sure. It’s not as bad a picture as many people may paint. And I’d much rather live in Cleveland than in Miami.”