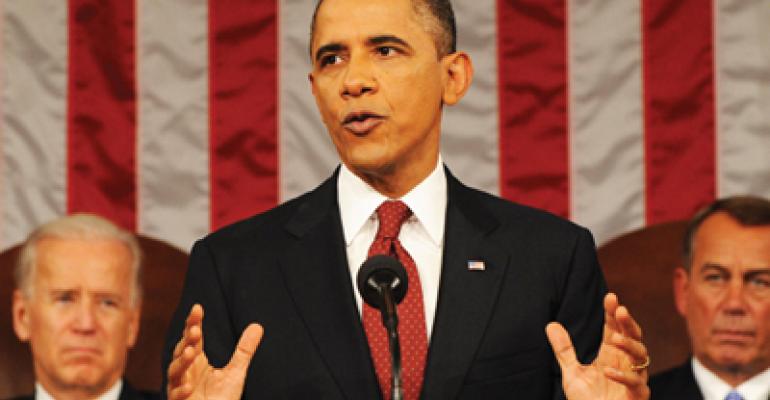 Industry groups respond to State of the Union address

National Restaurant Association officials urged U.S. lawmakers to foster policies that will help accelerate growth in the foodservice industry and other businesses as President Barack Obama delivered his State of the Union address Tuesday.

In his address last night, the President outlined plans to battle persistently high unemployment and create new jobs by focusing on pro-business policies, like retooling the tax code to encourage employers to keep jobs in this country rather than outsourcing them.

In a letter to the White House and Congress, Steve Caldeira, president and chief executive of the International Franchise Association, noted that while the economy is expected to grow by 2 percent in 2012, “franchise businesses could grow significantly faster if the President and Congress offered solutions for long-term certainty on tax reform that do not raise taxes on small business, create additional credit access and a less burdensome regulatory climate that enables, rather than stifles, job creation.

Dawn Sweeney, president and chief executive of the National Restaurant Association, also encouraged the government to implement policies that provide long-term confidence to businesses, “such as depreciation schedules that give the restaurant industry and retailers the certainty they need to help spur investment and construction.”

The President also called on lawmakers in the State of the Union to address the issue of comprehensive immigration reform, which has the support of many in the restaurant industry.

“We applaud the President for recognizing the need to address comprehensive immigration reform now,” Sweeney said. “The Association supports sensible, comprehensive reform that combines worksite enforcement and strong borders with workforce and immigration policies and a visa system that meets U.S. worksite needs.

“This is an issue that requires bipartisan solution, and although difficult, must continue to be a high priority for federal officials. The patchwork quilt of state regulations is increasingly difficult for business owners and operators to navigate.”

Sweeney also said Congress needs to make certain that “any mandatory E-Verify program is efficient and easy to use by employers of every size. Also, businesses must be able to use the H-2B visa program without new red tape.”

In its letter to lawmakers, the IFA also set out several priorities for job creation, including:

"On behalf of the franchise industry, we respectfully urge Congress and the administration to promote pro-growth policies that will allow small businesses, and in particular, franchised businesses, to expand and create jobs,” Caldeira said.