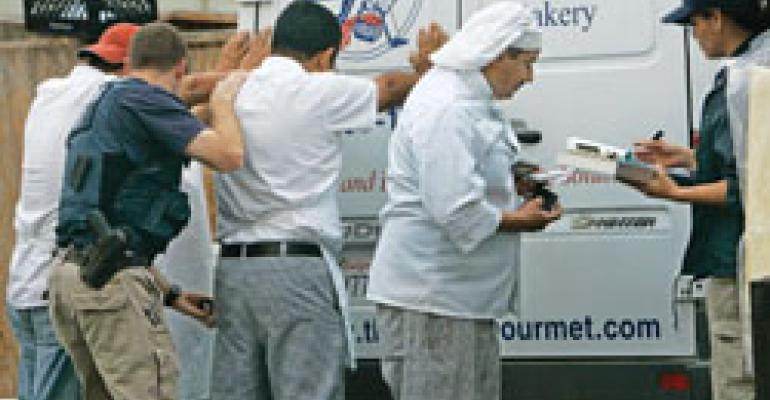 Federal immigration enforcement agents have in the past several weeks arrested or deported nearly 200 restaurant and hospitality workers in a series of dramatic raids that are eliciting shock and anger throughout the industry.

In most cases, foodservice employers are facing administrative charges that could escalate into criminal investigations into whether they had knowingly hired illegal aliens. In cases in Wisconsin and Kentucky, operators are facing far more serious penalties for allegedly harboring in their homes illegal aliens who also worked for them.

In all, about 500 people were arrested, detained under house arrest pending investigation, or deported for entering the country illegally and landing a job without the proper documentation. Meanwhile, some of the employers face charges of knowingly hiring illegal immigrants.

An ICE spokeswoman said the arrests in the restaurant industry have been going on since the beginning of the year, but have intensified in the past several weeks.

The sweeps have infuriated restaurant industry leaders, civil rights groups, lawyers and foodservice employee activists who condemned the dragnets as unfair and unconstitutional. One raid May 2 in San Francisco at El Balazo, an 11-unit taqueria chain, prompted a protest by local residents, customers and a state senator. The raid resulted in the arrest of 63 employees and forced the owner to close three restaurants for several days because of severe understaffing and to face charges of hiring undocumented workers.

But other associations favoring tougher immigration enforcement saluted ICE’s crackdown, although they are critical that the agency’s approach is piecemeal and should be more expansive.

The ICE sweeps involve restaurants in nearly every region of the nation. Here are a few:

ICE agents detained 16 suspected illegal aliens and removed them in handcuffs from The French Gourmet Bakery in San Diego May 16. Because those arrested are suspected of having fraudulent identification, the employers currently face no criminal liability.

“The truth is that everybody knows we need and want them to work jobs Americans won’t do,” said Saru Jayaraman, president and founder of Restaurant Opportunities Center United, an advocacy group that was founded to help foodservice workers displaced by the Sept. 11, 2001, terrorist attacks in New York and now stretches nationwide. “The restaurant industry couldn’t survive without them, and it’s been proven that it’s good for the economy.

“It’s true there are employers who exploit undocumented workers and make them too fearful to complain about poor wages and who scare them with deportation fears,” she continued. “But there’s no way these deportations are going to fix anything.”

Along with increased counter-terrorism activities and heightened border control, improving immigration enforcement by concentrating on the workplaces of industries where some employers knowingly hire the undocumented and where illegal aliens tend to work in high numbers is a top priority of Homeland Security, said Pat Reilly, a spokeswoman for ICE.

She said ICE’s Worksite Enforcement Unit, which targets employers who defy immigration laws and ferrets out terrorist threats in the workforce, began conducting the raids last year, including the high-profile sweep of six meat plants in Colorado in December that led to the arrests of 1,200 suspected illegal aliens.

She said ICE agents are usually armed with what is called a “Blackie’s warrant,” which, unlike normal criminal warrants, does not name an individual, but identifies a suspected criminal activity, like hiring undocumented workers, and gives law enforcement wide latitude to detain individuals and determine their identities.

Reilly, who preferred to call the raids “criminal enforcement operations,” said agents targeted jobsites where undercover investigations had produced evidence or probable cause that employers were flouting the law and where it was known illegal aliens continued to work after exhausting all of their legal attempts to remain in the country.

As a result, contrary to the allegations of immigrant rights activists, none of the raids among the restaurants was randomly selected because of obvious racial or ethnic characteristics of the staffs.

“We don’t racially profile,” Reilly said, acknowledging that the majority of people arrested in the restaurant raids were Mexican. The 63 detainees from El Balazo in San Francisco and 16 suspected illegal aliens arrested at the French Gourmet Bakery in San Diego were all Mexican, except for one Guatemalan, she said.

The workers arrested at the Bubba Gump unit in Hawaii and in the Pewaukee, Wis., case were Chinese and Mexican, she said.

The latitude of a Blackie’s warrant allows agents to arrest people who could not produce proper identification to prove they could work legally in the United States even though such individuals may not have been the targets of the initial raid, Reilly said.

“This is a very high-resource commitment,” she said. “If you are a legal, permanent resident and are authorized to work, you have to have documents on you at all times. So in targeting certain workplaces, our agents have the right to demand identification from all workers. This usually results in several others being arrested.”

Reilly said the investigations have nothing to do with the controversial no-match rules ICE tried to enforce last year that would have required employers to fire people who could not promptly reconcile Social Security database discrepancies. A lawsuit by employee, immigrant and civil rights groups seeking to block enforcement of that regulation is still pending in federal court in San Francisco.

Ira Mehlman, national media director of the Federation of American Immigration Reform, a Washington, D.C.- and San Francisco-based group that advocates for tougher immigration laws, called the ICE sweeps “long overdue,” and commended authorities for them.

“For years, immigration officials did nothing, and that is why we have such a large population of illegal aliens in the U.S.,” he said. “But just as they go after the worker, they need to go after the employers, too. We’ve been advocating far more severe penalties for employers.

“Once people get the idea that it’s going to be painful and expensive to hire illegal aliens, it will change their behavior.”

But Michael Donohue, a spokesman for the National Restaurant Association, said the raids offered rich evidence that the nation’s immigration rules are as broken as ever.

“We do not favor this enforcement-only approach to immigration,” Donohue said. “It can’t be solved just through enforcement, only through law and regulation. And Congress clearly has to revisit this issue and work on a comprehensive reform package. That’s the only way to deal with it. Our immigration system is broken.”

The American Civil Liberties Union, citing the ICE sweeps at the meat plants in Colorado in December, said the current round of raids are repeating a disturbing practice in which the defendants lack proper legal representation, which the ACLU says is unconstitutional.

“Groups of immigrants are rushed through mass hearings that last only minutes and during the hearings are required to waive their right to an immigration hearing in exchange for better criminal plea agreements,” the ACLU said on its website. “Workers with legitimate claims to remain in the country legally, including immigrants with family members who are U.S. citizens or with legitimate claims of asylum or political persecution, are ostensibly barred from pursuing those claims under the criminal plea agreements.”

“Instead of ensuring sufficient time to analyze complex immigration and criminal-law issues, the prosecutors are issuing arbitrary ‘take-it-or-leave-it’ demands to lawyers who are overwhelmed with clients, language barriers and devastating immigration consequences that require careful consultation with experts.”

Foodservice employers caught up in the sweeps expressed shock and disappointment about the raids.

Bubba Gump Shrimp Co. officials did not return phone calls, but Rob Berger, director of Hawaiian operations for the San Clemente, Calif.-based company, told the Maui News that he was saddened by the arrests, noting that some of the employees had been with the unit for years. But he also defended his company’s scrupulousness in complying with hiring and immigration laws.

“A lot of these employees worked here for years and have friends and family,” the newspaper quoted Berger as saying. “It’s a very difficult time in this restaurant, obviously. We were closed for a few hours, but we were up and running shortly thereafter. The restaurant experience for the guests will be the same.”

Berger indicated that Bubba Gump, which has nearly 30 units, fully cooperated with ICE agents and predicted that it would face no criminal liability because of its record of legal compliance in the hiring of foreign nationals.

“Obviously, we assisted them in any way we could,” Berger said, describing the initial encounter with the agents. “Our company has strict policies and procedures to ensure maximum compliance with immigration laws. During the hiring process, we do take a lot of steps to ensure that we only hire people that are authorized to work in the United States.”

He added that employees are required to present two current forms of identification and that the information on them is verified by a company bookkeeper.

A receptionist at the office of Marino Sandoval, a naturalized citizen from Mexico who started and owns the El Balazo chain in San Francisco, said her boss was not going to discuss the raids in the press or his legal status related to them. Asked if she had contact information for a lawyer representing Sandoval, she declined to answer.

The El Balazo sweep prompted several hundred people, including religious leaders, customers, neighbors and state Sen. Carole Migden, D-San Francisco, to demonstrate there outside of ICE’s Office of Detention and Removal Operations on Sansome Street, where many of the 63 workers detained in the El Balazo raid were being held.

“A lot of our municipalities are feeling these are improper invasions,” Migden said, adding that the raids undermine San Francisco’s image as a “safe-haven community” for undocumented immigrants.

According to ICE’s annual report, 276,912 illegal aliens were deported or left the United States voluntarily in 2007, a 45-percent increase from a year earlier.