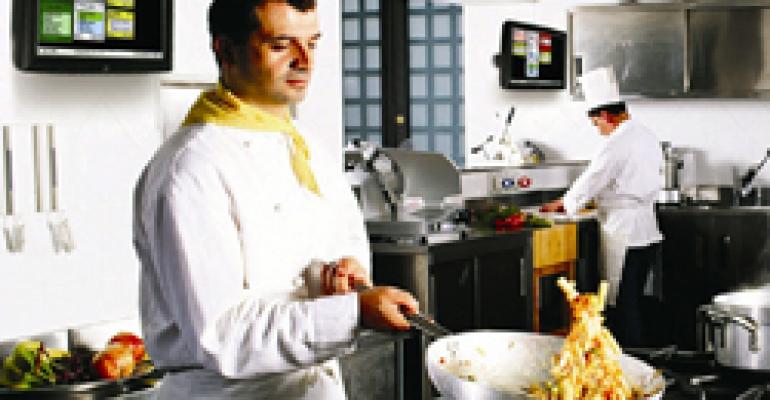 The Clyde's Restaurant Group of full-service operations in and around Washington, D.C., associates rising sales and improved food quality with the transition from printed tickets in the kitchen to display terminals with controllers and order-management software.

Such an experience might explain why vendors are reporting that independent and small, multiunit operators increasingly are trying the kitchen display system, or KDS, technology that often is associated with larger chains.

"While I cannot directly quantify the impact that the kitchen management system has had on our operation, we have experienced $1 million in [annual] sales growth" and "are serving a better product," said David Moran, managing director for Clyde's, which installed display screens and order-management software at three of its 13 restaurants.

Visually oriented order-management systems deliver to display monitors in restaurant kitchens orders entered into point-of-sale terminals by front-of-the-house staff. Such systems permit operators to better coordinate the preparation of individual order components by routing items to the appropriate cook station based on cook times, so that all items within that order are ready simultaneously.

Depending on a specific system's functionality, such a technology package also can facilitate communication between servers and kitchen staff, provide feedback about the status of orders placed by diners at each table and capture service times for management reporting. Some applications, like ConnectSmart Kitchen (CSK) from QSR Automations of Louisville, Ky., support the display of cooking and plating instructions, along with corresponding images.

Some vendors pegged the cost of display and order-management systems at around $1,000 per display screen/controller combination, including bundled software. Maintenance expenditures vary based on such factors as whether an operator chooses depot-type service only — the least expensive option — or access to on-call technical support around the clock.

"Traditionally, the smaller players in the full-service sector haven't pushed to automate kitchen management functions because they weren't sure there was a cost justification," said Ed Rothenberg, vice president of research and development for restaurant solutions at Micros Systems Inc. of Columbia, Md. However, he added, those operators are coming to understand the technology's potential to "sharpen their competitive edge."

Rothenberg said Micros currently is seeing about 600 individual installations of its KDS kitchen management system each month. Of these, roughly 300 go into full-service establishments, he indicated.

Micros is not alone in targeting and serving smaller full-service-organizations: QSR Automations, which presently has an installed base of more than 15,000 kitchen display systems, says it now is actively courting that group, as is Aldelo Systems of Modesto, Calif., according to that vendor's representatives.

Clyde's Restaurant Group implemented Micros' kitchen display system in conjunction with that vendor's 3700 point-of-sale package in the Old Ebbitt Grill as part of a 2004 kitchen-renovation project. Company officials said the objective was to achieve more consistency of order component quality, as well as to efficiently serve the 3,000 to 4,000 guests who patronize the restaurant daily.

Initially, Clyde's installed three kitchen display screens for use by chefs in expediting the line, along with one screen for use by front-end managers in monitoring prep times for the entire dining room. Chefs immediately embraced the system, noting that it resulted in better food quality. Within days, additional display terminals were then installed at each prep station. Clyde's subsequently has deployed the technology in two of its other restaurants: Clyde's of Gallery Place and Clyde's Willow Creek Farm.

Afunction of the Micros kitchen system used by Clyde's, dubbed the "speed-of-service" display, enables front-of-the-house managers to monitor the progress of the food being prepared for diners at individual tables. Each table is represented by an icon. A blue icon indicates that preparation time is within pre-defined standards, while a red icon means the kitchen has exceeded the acceptable preparation time frame for one or more menu items ordered. Once an icon has been red for several minutes, exclamation points appear to signal a critical situation.

"The 'speed-of-service' screen is an invaluable tool," said Moran of Clyde's. "If a manager comes into the kitchen, checks the display and sees that one or more tables have a longer-than-expected prep time, that manager can proactively visit the table to ensure customer satisfaction."

Clyde's has also customized the system to suit its own needs. For example, alert functions permit servers to input and share with kitchen staff such information as the presence of a VIP, the need to rush an order to accommodate a patron's request or the fact that a diner has a food allergy. The information appears at the top of the appropriate screen in the kitchen, so chefs can prioritize tasks accordingly.

"At Ebbitt's busiest meal periods, it isn't uncommon to have 50 to 60 orders backed up and not on the screen," Moran said. "But with the alert functions, chefs see what they need to see, ASAP."

Similarly, an "all day" tool helps cooks at individual stations better juggle preparation tasks by providing on-screen breakdowns of how many of each particular item has been ordered. Before the tool was added, this was difficult because order volume made it impossible to see more than a fraction of the orders in the system queue, Moran explained.

"Having the food come out more quickly means even more efficiency, which is critical when you have a restaurant that turns its tables three times for lunch and as many as five times for dinner," Moran said. "The chefs are much more focused on the quality of every plate rather than shuffling paper dupes up and down the line."

Added the Clyde's executive, "The system has also brought a sense of calmness to a previously very loud work environment, because the chefs no longer need to call to fire for each dish to each station."

While Moran deemed the installation of the kitchen system fairly painless, he said it presented a challenge in that cooks initially had some trouble adjusting to the concept of firing their orders immediately rather than waiting for a chef to instruct them to do so. There was also a surprise: Food began to emerge from the kitchen faster than servers had anticipated – so fast that customers did not have time to order second rounds of drinks.

"After a few shifts, however, the cooks gained confidence in the system and started firing orders right away," Moran said. Similarly, servers learned, by trial and error, when to fire orders immediately and when to hold them to allow guests to enjoy their appetizers and/or an initial round of drinks, he reported.

"Our chefs and managers were very confident in our staff's ability to jump right in with the technology," Moran said. "While we did not do any physical training, we talked to [employees] about the upcoming changes and how [they] would benefit each of them and, ultimately, our guests."