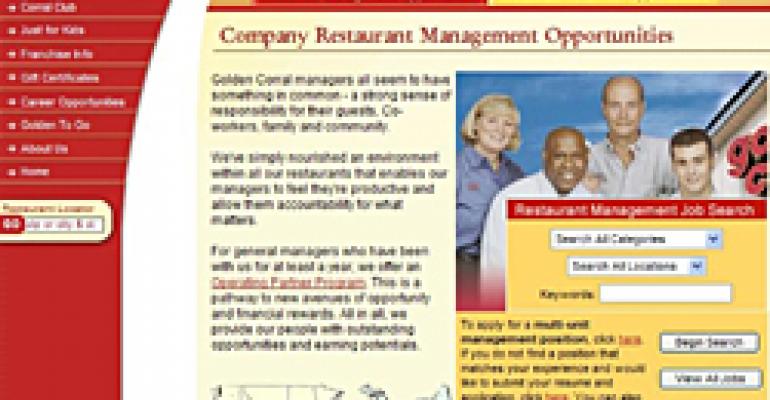 Hiring technology: Tools for finding, processing the employees you need

Over the past two years, Seattle-based Tully's Coffee Corp. has doubled the volume of applications it receives each time it has open managerial or barista positions.

The company also is doing a better job of weeding out unqualified applicants, saving a significant amount of time and money by reducing the candidate "pool" for each available slot by an average of 40 percent. And Tully's is "well on the way" to reducing hourly staff turnover from 200 percent to 100 percent, says Maria Ostrand Card, human resources manager for the organization that operates 90 and franchises 36 Tully's Coffee outlets domestically.

For Tully's, as for many other operators, the use of technology to recruit and evaluate prospective employees constitutes a major catalyst for such improvements. A practice that not long ago was considered cutting-edge for most restaurant company recruiters — finding employees through the Internet — has become a firmly entrenched standard operating procedure. Ease of use, software that screens and sorts applications as well as sends e-mails, and the overall tech-savvy bent of those seeking jobs in the restaurant and hospitality industry have sparked a boom in online recruiting. Some restaurant companies peg the volume of new hires coming from the World Wide Web at upward of 25 percent to 40 percent and are leveraging the increasingly sophisticated capabilities of online job boards as well as enhancing the feature-sets of their own sites.

At the same time, a desire to streamline the hiring process as a whole has sparked widespread deployment of a variety of assessment tools. These tools are being applied not only at the managerial level but also on the hourly employment front.

"With the cost of traditional advertising so much greater than that of Internet-based recruitment and the price of turning managers and hourly employees so high [industry estimates range from $20,000 to $25,000 for the former and $2,000 to $2,500 for the latter], it would be short-sighted not to give technology a major role in all our hiring processes," says Judy Irwin, vice president of human resources and training for Golden Corral Corp. Raleigh, N.C.-based GCC is the parent of the 480-unit, grill-buffet segment leading Golden Corral chain.>>

Golden Corral has developed a proprietary job agent for the Career Opportunities page on its website. Individuals who browse through the job listings on the page but cannot find a position that is within the realm of their qualifications and/or a particular region can fill out an online request to be notified when an appropriate opening does materialize and has been flagged by the agent. "We have definitely identified many more candidates this way and are planning further enhancements based on these results," Irwin notes.

The ability to spread the word about available positions to a far greater number of prospects than would be possible otherwise and, in turn, draw from a larger pool of candidates indeed ranks among the biggest benefits operators are reaping from leveraging the Internet to recruit personnel. That pool appears to run extremely deep: More than 125 million people have posted resumés online, according to Michael Moore, co-founder, president and chief executive of RCI Inc., a human resources consulting firm headquartered in Jupiter, Fla. There are currently about 4,400 employment websites in cyberspace, including general sites like Monster.com, Hotjobs.com and CareerBuilder.com, as well as industry-specific sites like Hcareers.com and needwaitstaff.com. Hcareers.com, which bills itself as the dominant industry-specific Internet job board, claims to have more than 56,000 resumés and 75,000 jobs posted at any single juncture; NetTracker pegs the site's traffic at 900,000 unique visitors per month.

In addition, resumé database sites, such as InstaMatch.com and HotResumes.com, now number approximately 2,000. Most sites are free to job seekers, who can post their resumés, peruse listings and apply for jobs that interest them. Employers pay to list openings and post direct links to their sites.

Tully's signed on with CareerBuilder.com in 2004. Since that time, Ostrand Card says, the chain not only is seeing twice the volume of applicants for each position than it did in the past, but it also is recruiting individuals who, despite their qualifications, "may not have targeted us because they hadn't heard of us prior to logging on to the website or didn't know we had a store in their area." While Ostrand Card was unable to specify exactly what percentage of Tully's hires are linked to CareerBuilder.com postings, she estimated the figure to be in the "mid-double-digits." Consequently, the company does not limit the scope of positions for which it recruits on the Internet; baristas, assistant store managers, store managers and corporate personnel all have been hired with cyber-technology as a linchpin.

Ostrand Card attributes a fair portion of Tully's success with online recruiting to job board enhancements, which have proliferated of late. A majority of sites have been enhanced to incorporate tools that search resumés received and notify employers whenever a candidate who is a good "match" for the position and possesses user-defined qualifications submits an application. For example, CareerBuilder.com offers an add-on tool called Smart Job, which evaluates job postings and, using an intelligent matching algorithm, finds resumés in the site's resumé database that best match the requirements of a given position. Up to 25 pre-sorted resumés per job are emailed to clients' accounts and automatically placed in a "My Applicants" area of their personal "MyCareerBuilder" pages for sorting, filing and review. Users have one hour from the time of an initial posting to optimize a job description before Smart Job matching occurs.

Meanwhile, Hcareers.com now boasts Resumé Detective, which sends employers an e-mail each time a resumé is posted to the site by an individual whose skills and attributes mirror those highlighted in their job postings. Other upgraded services also are available to prospective employers using the site, among them the ability to create an Employer Profile, or one-page summary, intended for attachment to each job posting. Hcareers.com also has inked a deal with Portland, Ore.-based talent management software provider Unicru, which in 2006 was acquired by Kronos of Chelmsford, Mass., and now operates under the Kronos Talent Management division moniker. Under terms of the agreement, Hcareers.com visitors who want to apply for hospitality, restaurant or retail positions posted by the vendor's clients are routed directly to the Kronos Talent Management application on the employer's career website.

A spokesman for one operator on the West Coast noted that since his company began utilizing the Hcareers.com Resumé Detective™ six months ago, it has hired six candidates whose resumés — sent in response to six different postings — were ferreted out exclusively by the Resumé Detective™ tool. Similarly, Chicago-based Morton's Restaurant Group, owner of 69 Morton's The Steakhouse stores, is experiencing an 86-percent overall annual increase in hospitality job-seeker views of its online postings via the Employer Profile page, company officials said in a written statement.

Asked why they have eschewed the likes of Monster.com, Hotjobs.com and CareerBuilder.com, going instead with Hcareers.com and its ilk, operators say the latter tend to produce a more qualified base of candidates, at least in their cases. "We tried a few general sites and often were bombarded with resumés from people, even at the managerial level, who knew nothing about foodservice," said the West Coast operator spokesperson. "That does not happen with Hcareers."

Ostrand Card has found otherwise. "Sure, we get resumés from candidates who don't have the right skills or experience, but we get just as many from those who do," she insists.

But whether they opt for general or industry-specific websites, operators also are achieving cost savings from migrating to online job boards and recruitment tools. Fees for Internet job sites are lower than for other employment sources, such as advertising and personnel agencies. For example, CareerBuilder.com users can post one job for $419 or buy job postings in bulk at $390 apiece for two or three postings; $350 apiece for four or five postings; $325 apiece for six to 11 postings; $300 apiece for 12 to 17 postings; and $270 each for 18 to 24 postings. Employers can initiate all postings at the time of purchase or save a portion for future use. Prices for resumé database access range from $1,199 for two weeks, including a 30-day posting of one position, to $13,089 for one year, including 30-day posting of 20 jobs.