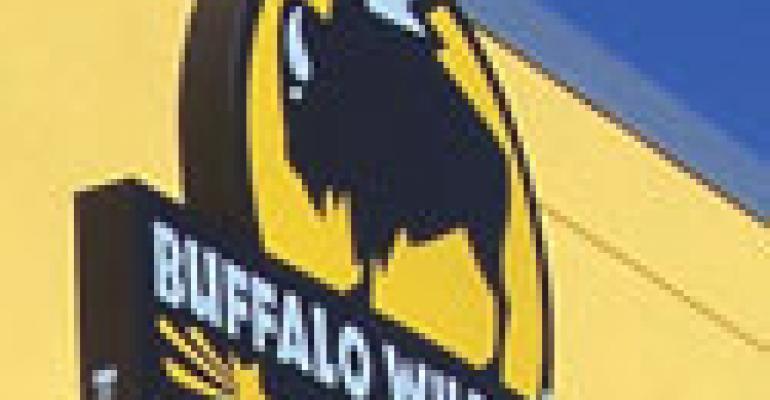 After reporting higher second-quarter profit, Buffalo Wild Wings officials told investors that the chain was able to recover from a sluggish April by streamlining operations at underperforming stores and capitalizing on a lower chicken wing prices.

The company also discussed its plans for the current third quarter, which is typically a strong one for the casual-dining chain because of the beginning of football season.

Despite same-store sales declines of 0.1 percent at company-owned restaurants and 0.7 percent at franchised units for the June 27-ended second quarter, Buffalo Wild Wings posted a 31.4 percent jump in net income to $9.2 million, compared with $7.0 million a year ago. Revenue increased 12.4 percent to $145.7 million.

The Minneapolis-based chain recorded earnings per share of 50 cents, compared with 39 cents a year ago, which surpassed the 42-cent consensus prediction on Wall Street, thanks in large part to an 11-percent decrease in chicken wing prices from a year earlier, chief financial officer Mary Twinem said.

Also, many of the restaurants identified as underperforming — and as contributors to same-store sales decreases of 3.7 percent at corporate restaurants and 2.4 percent at franchised locations the first three weeks of April — received extra focus for improving efficiency, she added. Those restaurants have turned sales around to approach flat comps so far in the third quarter.

“The commonality of those underperforming stores was that we thought the real estate was great, but the sales levels didn’t match,” Twinem said. “Most of the issues with those locations were operational, and we’ve been focused on changing what they needed to change in order to get them up to flat same-store sales.”

Much of Buffalo Wild Wings’ sales mix remained unchanged, with traditional wings making up about 20 percent, boneless wings accounting for 19 percent, and 14 percent of total sales being purchased at takeout, Twinem said.

More details from the call:

Strong start to the third quarter

The crucial third quarter, when football season starts, got off to a good start in July for the company, Twinem and chief executive Sally Smith said. Same-store sales turned positive, increasing 2.2 percent at company stores and 0.2 percent at franchised units. Both executives said operations improvements drove sales and that Buffalo Wild Wings benefited from broadcasts of the World Cup, an additional pay-per-view Ultimate Fighting Championship match and the shift of the July Fourth holiday to a Sunday.

Having addressed many of the issues leading to sales softness in April, Smith said the company’s goal of 20-percent earnings growth for the year is within reach.

“Just as April didn’t make the year for us, July doesn’t either,” Smith said. “We’re very encouraged by the sales trends we see and the moderation of wing prices.”

Buffalo Wild Wings once again will host a fantasy-football league this year and will increase its marketing during football games. The chain will play more commercials during games than ever before, and will be on TV and radio concurrently for the first time.

Competition for the chain’s bar business remains fierce, Twinem said, so the company is testing a happy-hour promotion in several markets, some with media support and some without.

Smith added that Buffalo Wild Wings also is testing an unlimited-wings offer at lunch in 68 restaurants, as well as a “lunch madness” program to serve guests as quickly as possible at the mid-day meal at 39 locations in four markets.

“The goal is to drive our lunch business,” Smith said. “If you need to be in and out in a short period, we’re testing what could people order with limited time for lunch. We’re also trying to train the servers to identify those guests that have a limited time.”

Smith said Buffalo Wild Wings could be considering opening in more nontraditional sites in the near future.

“We’re just starting out, but we have two airport locations and we’d anticipate growth there,” Smith said. “Certainly at military bases as well; we’ve already been approached about doing another one. And we’ve had great success at the NASCAR Hall of Fame.”

Buffalo Wild Wings plans to complete 21 remodels during 2010. It reported that it’s on track to meet its 13-percent unit growth target of about 85 new restaurants, with 36 opened in the first half of the year, 30 planned for the third quarter and the rest scheduled for the fourth quarter.