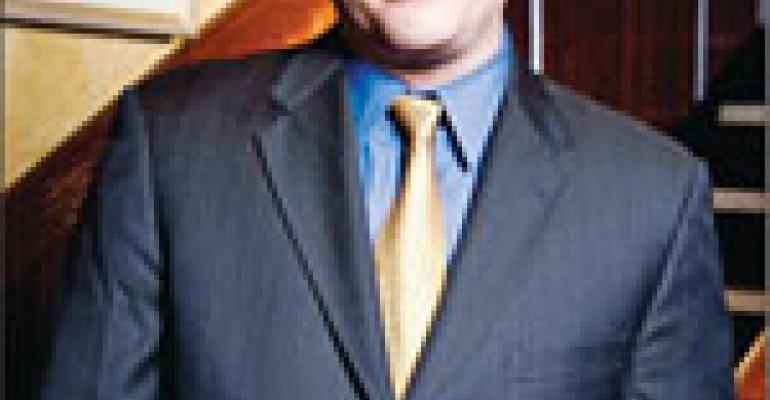 Recession fears are sending shivers through the restaurant industry, but Jeffrey Bank, chief executive of Alicart Restaurant Group in New York, is confident he can weather tough times. Alicart’s largest concept is Carmine’s, an 18-year-old family-style Italian restaurant known for large portions and value prices. There are currently three corporate and two licensed locations, and talks are underway to expand to Las Vegas, Orlando, Fla., and New York’s Long Island. A Carmine’s cookbook also is slated for this fall. Bank said he works closely with Gary Bologna, chief operating officer, and Glenn Rolnick, director of culinary operations, to run a tight ship. Bank joined Alicart as a partner in Artie’s Deli, the last project from Artie Cutler, a legendary restaurateur who died in 1997, and whose wife, Alice Cutler, remains active in the company.

We were there 12 years ago, before anyone else. It is now one of the top-grossing independent restaurants in the U.S. Our three corporate Carmine’s, and Virgil’s, our barbecue restaurant in Times Square, did a combined $60 million in sales last year.

What is the secret to Carmine’s success?

We have set up a chain mentality in the back-of-the-house, but we still run like a neighborhood family restaurant in the front-of-the-house. We have checklists for more things than you can imagine and training manuals with color pictures to show how the food should look. Our manager of training and development can write a procedure for anything.

How do you motivate employees?

We give people careers, not jobs. They see they can advance. I was a partner in Artie’s and now I am CEO of the company. With each step up, they make more money and better benefits. We are very good at providing the tools people need. You have to have good equipment. You have to be fair. We have 900 employees, not counting the two licensed Carmine’s. The majority of managers have been with us 10, 12, 14, 18 years. The head chef of Carmine’s in Times Square started out as a prep cook.

What is your management style?

I like to think I am a conductor of a fantastic orchestra. We give the directors and managers a lot of latitude to do what’s right. They take a lot of pride in the restaurants, and I think it shows.

What is Carmine’s average check?

How are you dealing with rising operating costs?

We have very long leases. That is the key to life here in New York. We can’t do much about fuel costs. We keep working on our food costs. We have huge volume. We pay our bills on time, so we get a net discount pricing. Last year we bought 57 tons of calamari for our three Carmine’s.

How do you increase sales?