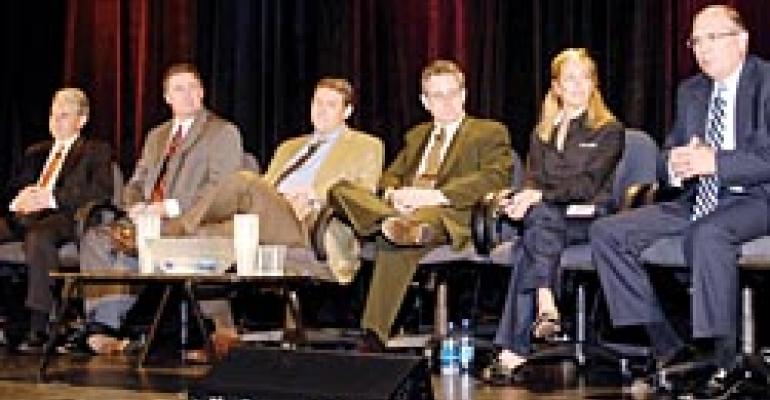 ATLANTA Technology company executives discussing major industry trends at the 12th International Foodservice Technology Exposition acknowledged sustainability and environmental concerns as key drivers of the decision-making process among suppliers in the decade ahead.

"When it comes to sustainability, all of us here on stage are concerned about our impact on the environment," said Steve Garland, the national sales manager for Epson System Device Group. "This isn't just like the '70s with 'green' paper. We're looking at things end to end. How do we run profitable businesses and still be good stewards to the environment?"

Alan Liddle, managing editor of conferences and technology for Nation's Restaurant News, agreed that among operators and vendors alike green strategies and marketing have come on "hard and fast" in recent months.

Garland explained that Epson, as a Japanese-owned firm, long has been concerned with its impact on the environment.

"The Japanese economy has known that resources are scarce," he said. "There are always concerns about where do we source components, raw materials, resins. How do we reduce waste?"

Karen Sammon, president of PAR's Software Solutions division, said "all of us" in the vendor community "can do a better job" when it comes to environmental concerns. She explained that she is "very interested in being more carbon-neutral and sustaining the environment and protecting it."

"I look at our terminals," Sammon said, "and consider how disposable they are. Are we shipping them in containers that are recyclable? What kind of packing materials are we using?"

She said PAR is working with a franchisee of the quick-service chain Carl's Jr. who has converted all of his vehicles from being gasoline powered to running on oil from deep-fat fryers.

"One of our objectives is to eventually convert our [service] vans to running on fry oil," Sammon said.

Paul Armstrong, chief technology officer of MICROS Systems Inc., said his company has explored ways to make POS terminals more environmentally friendly and energy-efficient. He explained that MICROS recently completed an analysis for a cruise ship line that was looking to install up to 140 traditional POS terminals on a vessel.

"We analyzed how much more diesel fuel the ship would expend over the year to carry the heavier terminals and found it was substantial. It was a no-brainer. They took the nice green terminals."

Moderator Robert Grimes, chairman and chief executive of Accuvia, which jointly produces and manages FS/TEC with Nation's Restaurant News, questioned the panel on who is responsible for protecting critical customer payment data.

"Everybody along the chain shares a level of responsibility," from operator to vendor to the credit card processor, MICROS' Armstrong replied.

"Why not something else that is more secure?" he asked. "Technology has moved a long way [from magnetic tape]."

Kevin Tigges, managing director of the Retail & Hospitality Industry Unit for Microsoft Corp., agreed that suppliers have to be PCI compliant and said that Microsoft recently had hosted a summit to address the issue.

At one point, Tigges also gave voice to a theme repeated in numerous sessions at FS/TEC: the need for better integration among foodservice technology devices and software. The integration challenge being addressed by Microsoft and other vendors is "huge," he said, and now represents "a big expenditure."

The increasing mobility of technological devices like cell phones and PDAs — personal digital assistants — also is expected to have a major impact on restaurants in the coming years, panelists said.

"Mobile is huge," said Epson's Garland. "I read a statistic that said over the next seven years mobile payments will go up over 400 percent. If we're not thinking about mobile payments, we're missing the boat.

"The customer is not just in front of the register anymore. You have to talk to people anywhere, anytime."

NRN's Liddle said of the mobile-device revolution that has the potential to influence marketing and service initiatives, as well as payment practices, "[Many] people over 40 don't really understand how important it is to their [younger] customers."

Radiant's Langenbahn agreed that "mobile technology will change the industry." But he added that it is dangerous "to get religious about a technology" because such strong feelings can obscure actual "business values" and that, ultimately, may mean "the operator will be hurt."

MICROS' Armstrong marveled at Apple's iPhone as an example of what might come from the mobility revolution.

"I can use it as a phone, look at pictures, maps, stock quotations [and] the weather," he said. "I can change my stereo at home. I can order food on the Internet. A single device does all this. These are the kind of things that will change our lives."