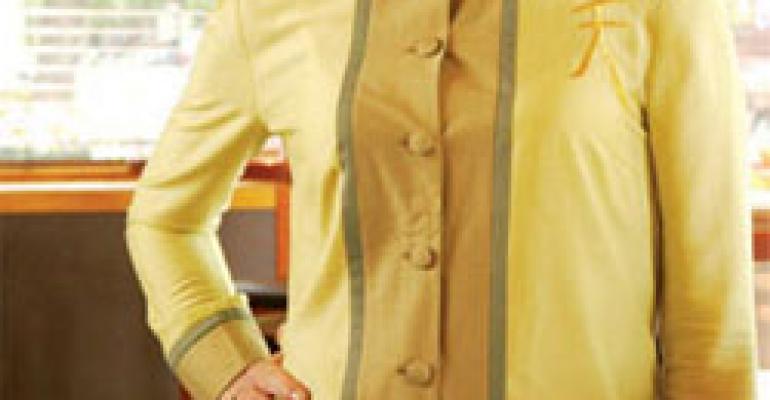 Restaurant owners have begun substituting eco-friendly materials for cotton or synthetic blends in uniforms, saying the alternative fabrics are better for the environment.

Among the materials such operators use are bamboo, hemp and organic cotton, all of which cost more than such traditional uniform materials as nonorganic cotton or synthetic blends.

Still, the majority of operators are staying with traditional fabrics.

But the problem with traditional cotton, according to environmental groups, is that it is one of the most pesticide-intensive agricultural crops in the world. “[Cotton] accounts for a quarter of all agricultural pesticides used, which cause major water pollution, chronic illness in farmworkers and devastating impacts on wildlife,” says the Organic Consumers Association, based in Finland, Minn.

Polyester, made from petrochemicals, is not biodegradable, notes the website of Green Choices, The UK Guide to Greener Living, based in Sussex, England.

“Making polyester uses large amounts of water for cooling, along with lubricants, which can become a source of contamination,” the website says.

Bamboo, a natural fabric made from the pulp of bamboo grass, is considered a sustainable textile because it grows fast and does not require the use of pesticides to thrive, says Lynette Cayson, who designed new, 100-percent-bamboo uniforms for Jardiniere restaurant in San Francisco for about 100 servers. The new attire replaces older uniforms made from a cotton-polyester blend.

Jardiniere, which prides itself on green practices, chose bamboo because “it’s sustainable and good for the planet,” says Greg Rowen, the fine-dining restaurant’s general manager. He also finds bamboo to have better “breathability” and ease of maintenance than the old uniform.

Eight-unit Big Bowl, owned by Chicago-based Lettuce Entertain You Enterprises, also just switched to bamboo uniforms.The decision was one of several that fit Big Bowl’s overall dedication to sustainability, including its methods for food sourcing, its choice of cleaning chemicals and its use of tap water instead of bottled water.

Dan McGowan, Big Bowl’s president, says he first saw bamboo fabric in golf shirts while on a trip. He sought out a designer to custom-make the uniforms, since he could not find any that were readymade. The new uniforms replace cotton shirts and cost about four times more.

“They are more anti-bacterial than cotton,” McGowan says.

There is no difference in laundering requirements.

McGowan’s colleague, Steve LaHaie, a partner in LEYE’s Shaw’s Crab House, said bamboo is cost-prohibitive for his two restaurants, but he is researching organic-cotton uniforms.

Hemp is another abundant natural fiber that can be made into clothing, as it is in the two Snappy Salads restaurants in Dallas.Owner Chris Dahlander chose to replace cotton aprons and T-shirts with hemp fabric because he wanted everything in his business to be as eco-friendly as possible.

“Hemp uses less water, fertilizer and pesticides than cotton, not to mention that it is a very durable fabric,” Dahlander says.

The shirts and aprons cost about 10 percent more than traditional fabrics, but Dahlander figures they are less costly in the long run because they hold up longer than cotton. “Hemp got a bad rap,” he says, because the kind used for clothing is a cousin to the varieties that yield marijuana and hashish. Because it is illegal to grow hemp in the United States, the fabric or clothing made from it must be imported.

Restaurant Nora in Washington, D.C., now a certified-organic restaurant, has used organic-cotton uniforms for about 12 years, says general manager Jack Zeneziano. He likes the quality and durability and says the restaurant has easily absorbed the higher costs.

Some restaurants are seeking alternatives to cloth tablecloths, which require high water and energy usage to launder them. One such operator is Saloon Partners Ltd. in Chicago, which recently switched from linen tablecloths at The Saloon steakhouse to a vinyl that resembles leather. Pete , Saloon’s executive chef, says the decision was part of the company’s overall efforts toward sustainability.

Using vinyl table coverings instead of linen or cotton also saves money on laundering, he says.