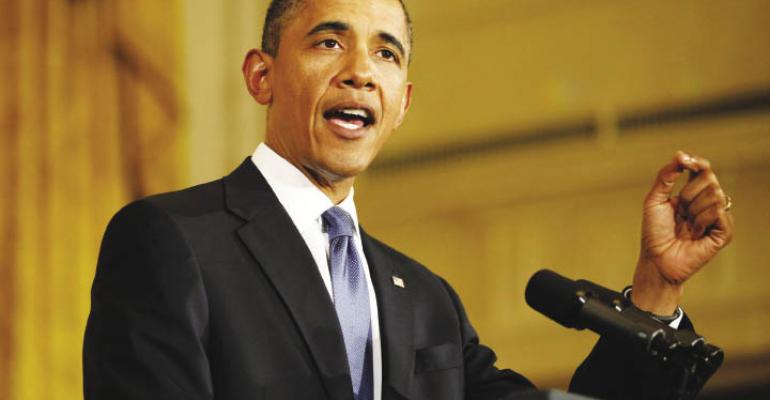 Restaurateur Juan Ramirez was scrambling for an answer within minutes of the Small Business Jobs Act being signed into law. Could the package of tax write-offs and lending incentives be the break he so desperately needed?

“I have two small restaurants, and I don’t know how I will be able to stay open if I don’t get some help,” the New York City restaurateur wrote in an e-mail to one potential information source. “Please let me know how and what I need to do to get a loan.”

After watching the federal government bail out the automotive, finance and home-mortgage industries, some restaurateurs are wondering if the Jobs Act is their rescue package. It promises to ease two of the economic downturn’s most debilitating problems: finding capital to update or open stores and lessening the burden of reinvestment when profits are already under intense pressure.

“It’s the largest small- business bill in about a decade,” said Hayley Matz, a spokeswoman for the U.S. Small Business Administration, or SBA.

Shoring up small businesses is just a means to the law’s ultimate end. As its name suggests, the legislation was passed to create jobs. “About two-thirds of new jobs come from small businesses,” Matz explained. “We have to help those small businesses because they’re critical to the overall recovery.”

Instead of providing incentives to hire, the Jobs Act aims to channel expansion capital to restaurants and other small businesses. Opening new stores or increasing the volume of existing ones would all but oblige them to create jobs.

A major part of that thrust is the creation of a $30 billion Small Business Lending Fund,  which is being administered by the Department of the Treasury. The dollars will be channeled through local banks to qualifying commercial borrowers in their respective areas. If the community banks lend more money to small businesses than they did in 2009, the Treasury will lower the interest rate it charges the lenders for use of the money to as little as 1 percent.

In addition, the Jobs Act replenishes the SBA’s lending pool with a $14 billion allocation. Those dollars will be channeled to borrowers through SBA- affiliated banks and other local lenders.

That setup has been the foundation of the SBA lending program since it was created, but observers say the size of the kitty is remarkable. That’s good news for restaurateurs, who received about one in 10 of the two most common SBA loans, the 7(a) and the 504, during 2009.

In 2008, according to the agency, some 7,000 restaurants borrowed about $2 billion through the two loan options. The following year, with businesses and lenders both concerned about economic conditions, the tallies of restaurant loans fell to just 4,000 borrowers and $1.1 billion.

This year, demand for the loans has been so high that the SBA ran out of funds four times, Matz said. Indeed, there’s a waiting list of approximately 1,500 businesses that were green-lighted for a loan prior to May, the last time the well ran dry. Restaurants and other businesses at the head of the queue were expected to receive their funds within 10 days of the law being passed, Matz said.

In addition to having a refreshed pool of funds available, restaurants that seek new SBA loans will be able to borrow a larger amount because of the Jobs Act. The legislation raised the cap on 7(a) and 504 loans to $5 million from the previous ceiling of $2 million.

“Real estate prices are at very attractive levels right now,” Matz said. “Franchisees could now be able to take advantage of that.”

Traditionally, SBA funds had to be used for expanding a business, Matz said. But she notes that a provision of the Jobs Act will enable restaurateurs and other small-business operators to use the dollars to refinance their mortgages in some situations. If a commercial mortgage is held by the owner-occupant of the property, he or she can seek a 504 loan until September 2012 to pay off the debt.

“A lot of [small-business] people have balloon mortgages that are now coming due,” Matz explained. “Five or six years ago, the terms were very good. But now it’s time to refinance, and that’s very hard to do. This will help them make that balloon payment.”

She credited the franchise industry for ensuring the inclusion of the provision.

The Jobs Act encourages SBA-approved banks and other facilities to lend the $14 billion by guaranteeing up to 90 percent of a small-business loan, all but eliminating the lender’s risk. The incentive will be in place for the remainder of the year.

The law encourages small businesses to take out the loans in part by waiving upfront fees for the remainder of the year. Experts liken the opportunity to being offered a no-points home mortgage.

It’s not as if restaurants need much encouragement, said Jack Butorac, chief executive of Marco’s Pizza Inc., franchisor of the namesake pizza chain. Expansion capital had been so difficult to obtain that the company set up its own financing program for franchisees.

Until that time, the SBA had been Marco’s leading lender.

Now the chain is working with an outside company to see if provisions of the Jobs Act could fuel the brand’s expansion. Signed agreements oblige franchisees to add 1,100 units to the 229 that are currently in operation.

Butorac said he’s particularly optimistic about the act’s modifications for two years of what and how much a restaurant can write off on its taxes when it makes certain investments.

“Maybe someone who was going to open one store might now do two,” he said.

Previously, an establishment that bought new equipment or other qualifying assets could deduct up to $250,000 of what it paid from its taxable income, significantly lowering what it paid to Uncle Sam. To help small manufacturers, the SBA gave less of a tax break if the restaurant spent more than $800,000 on, say, a kitchen re-do.

The Jobs Act lifts both those caps by large percentages while extending the tax break to other sorts of investments, including a restaurant’s expansion or even the purchase of a building, points out David Koenig, the National Restaurant Association’s expert on taxation and profitability.

The exemption for equipment purchases was raised to $500,000, and that write-off can be taken on outlays of up to $2 million, Koenig explained. If an operator prefers, he or she can use up to $250,000 of that half-million-dollar cap to expense a building purchase, a renovation or another leasehold improvement at a currently owned facility, he said. And the write-offs would be available for investments made both this year and in 2011. After that, the tax exemption drops to $25,000.

“That could be a huge advantage for us because we’ve asked all of our franchisees to update to an authentic Italian design,” Butorac said. “It also makes this a perfect time for expansion. And that creates 30, 40 jobs in each instance” a restaurant opens.

The NRA’s Koenig puts the tax break at the top of the Jobs Act’s likely benefits for restaurants, but notes that the $30 billion pool of new capital should be a major boon as well. “We supported the bill from the outset,” he said. “For our membership, one of the key issues has been access to capital and credit.”

The issue of bank participation

Still, there are issues yet to be addressed. “The immediate question is: What banks are going to participate in this?” Koenig said.

Butorac said a lender with whom he’s familiar already has decided it won’t apply for some of the $30 billion fund because of all the red tape that’s involved.

“They do not want to participate because of the handcuffs,” he said.

He acknowledges that, like Ramirez, he’s still trying to get his mind around the new law. For instance, he wondered, “the $30 billion — how does that affect us?”

He’s already identified one disappointment. “That amount is going to make it easier to get a loan because there’s financing available,” he said. “But the time it takes to go through the paperwork — dotting all the I’s and crossing all the T’s — it’s still going to take too long to get a loan.”

Marco’s stopped directing franchisees to the SBA lenders because 90 days often would pass before they got a yea or nay. He expresses his dismay that the agency didn’t use this occasion to simplify and streamline the application process.

But undoubtedly, Koenig said, “the totality of it should help the industry at a time when conditions are still difficult.”

“I’m excited about what’s coming down the pike — it sounds very good,” he said. “I’ve been searching for the answers, and the liberalization of the tax write-off gives us a lot of hope.”