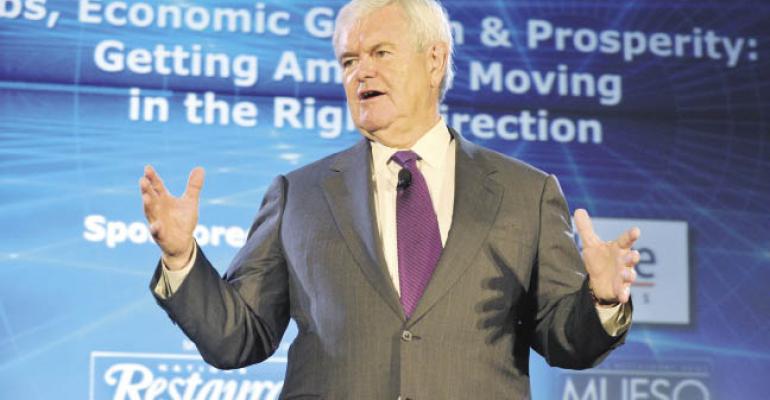 Eye on the future

﻿Change was in the air at this year’s Multi-Unit Foodservice Operators conference.

Whether from innovation within their own restaurants or from the larger forces of the rapidly changing business landscape, the industry’s continual evolution was on the minds and lips of the 750 foodservice professionals who gathered here recently.

In keeping with the conference’s theme, “Mission: Possible,” the keynote addresses, breakout sessions and casual conversations focused on new opportunities to fine-tune operations, boost sales and expand brands. Attendees also shared suggestions for ways to address the challenges of the day, including new health care costs, scarce capital and the changing consumer.

Despite the uncertainty still surrounding those thorny issues, attendees said they were actively seeking creative solutions and innovative ideas. The only nonviable option, it seemed, was sticking with the status quo.

“We must accept that things will not go back to the way they were for the industry,” Randall Friedman, publisher of Nation’s Restaurant News, told attendees in his welcome address.

Futurist Watts Wacker, the first of three keynote speakers, echoed that kind of forward thinking in his speech, which urged  attendees to think big and challenge commonly accepted limits.

Demographer Peter Francese, another keynoter, spoke of major changes in the makeup of the American consumer. Millennials and baby boomers, two massive generations that make up about 165 million people and represent about 65 percent of restaurant spending, will drive restaurant sales in the next five to 10 years, he said.

He also cited Hispanics, single mothers and female heads of households as niche markets ripe with opportunity for restaurants.

“Demographics is like a glacier,” he said. “It moves in slowly. You can just barely see it moving, but if you aren’t aware of it, it’ll crush you.”

Newt Gingrich, former speaker of the U.S. House of Representatives, gave the morning keynote address on the final day of the show.

When asked by the audience for examples of what the government could do to improve the restaurant business environment, Gingrich said much would be improved through tax cuts and write-offs for new equipment.

“By simply stopping the tax increases coming down the road, [the government] dramatically would improve the economic freedom,” Gingrich said.

He wasn’t alone in taking that position. Operators were widely concerned about the impact of new health care costs on their businesses. David French of the International Franchise Association moderated a panel on the impact of health care reform that also  included Rick Berman of the lobbying firm Berman & Co. and Scott Womack of Womack Restaurants, a 12-unit franchisee of the IHOP family-dining chain with units in Indiana and Ohio.

The only thing certain about the complex 2,700-page Patient Protection and Affordable Care Act, they said, was that employers’ costs would rise.

In another session, panelist Russ Bendel, chief executive of The Habit Burger Grill of  Irvine, Calif., said these new costs would force operators to “be smarter,” but noted that there was only so much more that they could scale back.

“Most of our businesses have become pretty darned efficient,” Bendel said. “Almost all of the fat has been cut.”

Another major concern that emerged repeatedly was the challenge of finding funding for expansion.

Operators packed a conference room for one session titled “Crack the code on financing.” Though it was widely agreed that financing is extremely hard to secure, the panelists said money is out there — for the strongest candidates, that is.

“You have to have excellent systems and controls,” said Jim  Coady of Sentinel Capital Partners. “The management team needs to show they really know what’s going on with their business.”

“If you have an economic model that makes sense, there are ways to get financing,” said Mack. “They say there is no more, but we come back, and there is indeed more. Get the right person in your organization sniffing this stuff out.”

MUFSO was also an opportunity for the industry to celebrate some of its success stories. Coverage of the 2010 award winners as well as other MUFSO highlights can be found in the following pages.