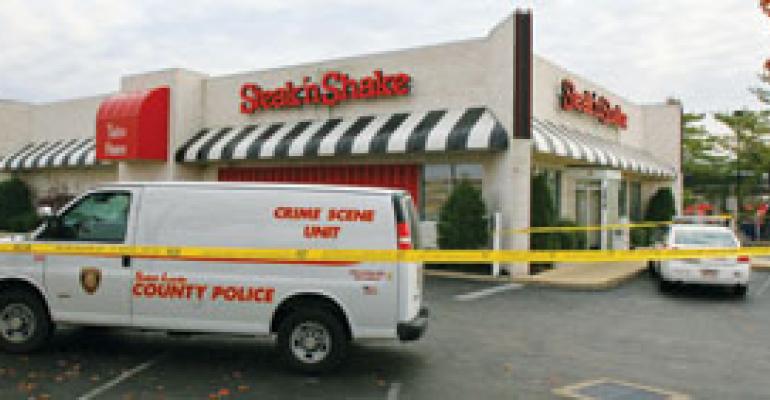 The shooting deaths of two Steak n Shake employees in November, which boosted the number of robbery-homicides in foodservice to eight since August, are stoking fears that the weak economy could lead to more carnage.

The bodies of Tammy Cantrell and Mark Gerstener were found on the morning of Nov. 10 at a St. Louis-area unit of the family-dining chain, joining a national crime blotter that also has had many robberies and other assaults at units of Subway, Denny’s, Waffle House, Ruby Tuesday, McDonald’s, Taco Bell, Pizza Hut and scores of local eateries, gasoline stations, convenience stores, and late-night college foodservice operations since the summer.

Because criminals have always viewed restaurants as cash-rich low-hanging fruit, no one is claiming that the industry is in the midst of a crime wave. But sociologists and crime experts agree that the fuse has been lit for some hazardous times ahead as unemployment grows, jobs disappear and the economic pain deepens.

Bound to make the restaurant industry all the more vulnerable to a grim tally of economic-related crime statistics in the coming months is the widespread implementation of late-night and 24-hour operations throughout the industry.

“It’s difficult to determine if bad economic times are a predictor of increased crime,” said Sandra J. Erickson, a forensic sociologist and president of Athena Research Corp., a Sioux Falls, S.D.-based firm that studies the sociology of crime and consults with national news organizations and law enforcement. “It’s a very complicated question because sociologists and economists believe it is not conclusive.”

But, she noted, “a downturn certainly creates the elements that lead to crime, and already we are seeing an increase in crime even before the recession has been officially declared.”

That uptick in crime is documented in the Bureau of Labor Statistics “Annual Census of Fatal Occupational Injuries in 2007.” The BLS census found that homicides in eating and drinking establishments had risen 2 percent in 2007, compared with 2006, to 90 murders.

“My advice to restaurant owners is to revisit their crime prevention programs and security measures,” Erickson said. “It seems clear we’re coming into a phase where restaurant owners and their employees need to embrace a higher level of alertness.”

Erickson said she is most worried that teenage criminal predators, a subject that she has researched and recently produced a publication about for law enforcement authorities, will account for a disproportionate share of robberies in the months to come.

Larry Barton, a crisis management expert who speaks on retail crime prevention and consults with several restaurant brands and the FBI, said that what is most troubling to him in the expected rise of crime in foodservice is the disproportionate amount of it that will be generated by fired employees.

Such was the case of the two suspects in the Steak n Shake murders. Both were former employees who recently had quit or been fired.

Aged 19 and 20, the suspects both may have known to strike the unit just at a time when the 24-hour operation closed for a one-hour extermination service.

The bodies of Cantrell, 44, and Gerstener, 24, were found in the Steak n Shake unit at about 1 a.m. by a bread deliveryman.

Company officials offered a $50,000 reward until police tracked down the suspects. Executives also announced a cutback on 24-hour operations in the market, but did not respond to inquiries about further crime prevention methods in light of the murders.

Just a few days earlier, in New York City, a 55-year-old meal deliveryman for a charity that provides weekend meals to the elderly was shot and killed in an apartment lobby in Brooklyn. No arrest has been made, but police believe they are looking for a teenager based on videotapes from the crime scene.

Nearly a thousand miles away in Oklahoma City, and just two days before the Steak n Shake murders occurred, Jeremy Moore, a 29-year-old first-time father, was shot and killed for $42 worth of pizza, police said. He worked for a local pizza operator. Police said he was still carrying money, but all of his pies were missing. There has been no arrest in that case, either.

A single father raising two children, Jed Henderson, 47, was shot and killed Sept. 6 in La Grande, Ore., when he stopped by a favorite local restaurant to pick up a meal after dark. Police arrested three in that case, two of them teenagers.

In Orlando, Fla., an 18-year-old McDonald’s customer succumbed to gunshot wounds Nov. 2, two days after he and two other teens were shot in the parking lot of a 24-hour McDonald’s. Police have neither suspects nor motive.

At a McDonald’s in Everett, Pa., a farming town near the West Virginia border, an employee was shot and killed by her husband in the parking lot during a domestic confrontation at night.

Meanwhile, armed robberies, usually after dark or late at night, are on the rise industrywide.

In one of the most brazen, three men robbed two Denny’s within an hour of one another around 9 p.m. on Halloween. Although security cameras were able to produce video showing the faces of the suspects, they remain at large.

“But I can’t say there is anything different that we could have done that we didn’t do [to prevent these robberies],” Wiesner said. “The safety of our employees and guests is our top priority.”

A number of Subways in the Orlando, Fla., area have recently been victims of armed robberies at night. Les Winograd, a spokesman for the Milford, Conn.-based sandwich chain, noted that the brand spares no expense on equipment or training to keep its franchisees and customers safe.

“The safety and security of our franchisees, their staff and customers is always top of mind,” he said. “No matter what the economic climate, there will always be people who want to take things from other people.

“That’s why we make it a priority to provide our franchisees with the information, advice and options they need to protect themselves and their businesses.”

Barton, based in Bryn Mawr, Pa., and author of the recently published book “Crisis Management Now,” challenged operators to re-examine their security methods and training as the economy weakens and the number of layoffs rise. He emphasized that restaurant employers should spend more time on background checks and on the initial interview with new hires.

“There have been 12 recessions since 1941, and in virtually every one of them, there has been an increase in workplace violence,” he said. “Unfortunately, that grim statistic is heaviest in retail and, secondly, in foodservice.

“Restaurants are a natural magnet for desperate people who act irrationally.”