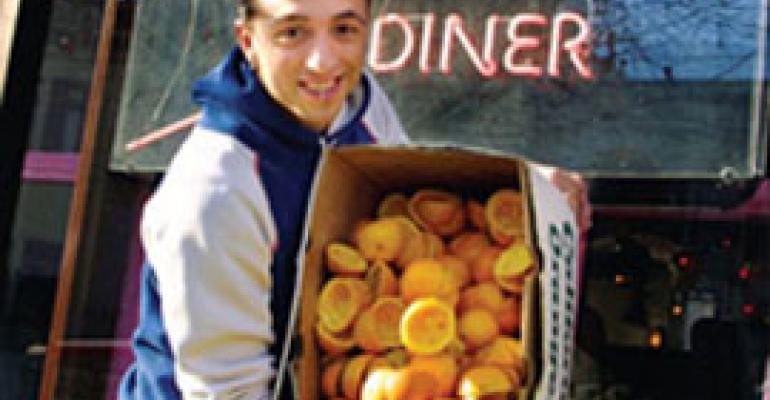 For many in the restaurant industry, the notion of “going green” means greenbacks gone.

From the installation of pricey waterless urinals to the use of higher-priced nonplastic cups made of cornstarch, the investment required in taking meaningful steps to save the planet can appear cost-prohibitive, despite promises from marketers that eco-friendly restaurants will attract like-minded customers.

Still, there is growing evidence that becoming more eco-friendly doesn’t have to have a negative impact on the bottom line. In fact, there are several ways in which restaurant operators can benefit financially over the long term, mainly through the reduction of expenses on trash removal, utilities and supply purchasing.

As demand grows for more environmentally conscious products, more and better-quality items are available at prices that are in line with conventional “non-green” alternatives.

So contends Niki Leondakis, chief operating officer of Kimpton Hotels & Restaurants, based in San Francisco. Leondakis is working with the Green Task Force of the National Restaurant Association to identify eco-practices for restaurant operators that can boost the bottom line.

Kimpton has established its in-house “EarthCare” program aimed at protecting the environment, which includes such practices as placing recycling bins in all guest rooms for the disposal of organic minibar items. But the practices were developed with the bottom line and guest experience in mind, Leondakis says.

“We just couldn’t do it if it costs shareholders money or compromises the quality of the experience for guests in any way,” she says.

One example is the simple act of recycling all cardboard that comes into Kimpton’s 40 hotels and 42 restaurants, which last year totaled about 117 tons. Because recycling waste tends to be less expensive than trash pickups, the cardboard recovery program saves Kimpton an average of $21,000 per year per property, she adds.

The reduction of waste in any way can have a financial benefit, not only in trimming trash-hauling expenses, but also purchasing costs, says Michael Oshman, executive director of the nonprofit Green Restaurant Association, or GRA.

For use as alternatives to disposable cups, Los Angeles-based Coffee Bean & Tea Leaf, for example, bought personalized coffee mugs for all employees of the GRA-certified coffeehouse chain’s more than 500 units.

“The result was tens of thousands of cups saved, and they’re saving money on garbage too,” Oshman says.

Concern about waste has sparked a move by some restaurant operators to stop serving bottled water.

Some, like Neal Fraser, chef-owner of the restaurants Grace and BLD in Los Angeles, have installed advanced reverse-osmosis water filters and carbonators to improve the purity and taste of tap water. Fraser recently began selling carafes of “house-bottled” flat or bubbly water for $2.50.

Previously, Fraser’s restaurants offered an imported bottled water, which he bought for about $1 each and sold for $6 to $7. Though the margin on the house carafes is lower, Fraser feels his water tastes better and, ultimately, is better for the planet.

Joe Doss, president and chief executive of the International Bottled Water Association, based in Alexandria, Va., is not happy with the growing notion that the sale of bottled water is somehow anti-environment.

Water bottlers now use much lighter-weight plastic, which, he contends, reduces their environmental footprint.

Only about 2.4 percent of bottled water sold in the United States is imported, he adds, and the type of plastic used for bottled beverages is estimated to make up less than 1 percent of the total U.S. waste stream, with only a small portion of that coming from water bottles.

Plastics are among the most recycled of materials, Doss adds, noting that about 23 percent of plastic containers are recycled. To improve that rate, however, his association is developing several pilot programs aimed at renewing interest in curbside recycling. Details, however, were not yet available.

A growing number of recycling companies, like the six-month-old United California Returns, based in Los Angeles, will pick up restaurant grease for free, using biodiesel-fueled trucks. The company then sells it to a biodiesel-fuel producer at a profit.

Most operators are forced to pay grease haulers to take away their used oil, so the offer of free grease pickup can save restaurants money.

In San Francisco, operators also can lower their trash bills by recycling food scraps. Norcal, the city’s designated garbage and recycling hauler, also collects food waste from restaurants, which is turned into compost and sold to area vineyards and farmers for about $10 per cubic yard. Similar composting programs are cropping up in other cities as well.

The Kitchen & Upstairs in Boulder, Colo., aims for zero waste, with almost everything from food scraps to the biodegradable to-go containers going toward composting. Plastic, glass, cans and paper are recycled. A local man known by restaurant employees simply as “Steve” shows up regularly to pick up used grease for free, which he uses to fuel his biodiesel car.

The restaurant even saves corks from wine bottles and donates them to a small recycler who turns them into corkboard products. In return, the restaurant is offered a discount on the resulting corkboard.

Adam Reed, the restaurant’s general manager, estimated that The Kitchen has reduced the amount of garbage headed for landfills by about 80 percent. Though the restaurant still pays for the recycling pickup, the effort is worth it, Reed says.

“Recycling isn’t necessarily the most cost-effective system, but the social message it carries is accompanied by a certain message about quality,” he says. “It’s a fun exercise to see how little you can leave behind.”

At the Montage resort in Laguna Beach, Calif., about half of the property’s waste is recycled, says Todd Orlich, director of food and beverage, who serves on an environmental-impact committee within the hotel that is developing eco-friendly policies.

In the first six months of this year, for example, the hotel saved about $2,093 in landfill fees by recycling nearly 7,000 pounds of glass and another $2,542 for recycling about 84,000 pounds of cardboard. The recycling hauler the hotel works with does not charge for pickup, he says.

For many restaurants, however, landlords may not pass on savings that result from reducing trash levels, but there are other ways to save.

Green advisors stress that any reductions in utility use will boost the bottom line.

The NRA estimates that spending on utilities consumes 2.5 percent to 3.4 percent of a restaurant’s total sales, depending on the type of business.

Generally, the more energy-efficient the equipment, the higher the cost of the machinery. But some states, like California and New York, offer rebates to businesses that purchase energy-efficient equipment to help mitigate the initial cost. Also, such equipment tends to pay for itself by lowering the water, gas and electricity bills, Young contends.

Foodservice consultant Dennis Lombardi, executive vice president of WD Partners in Columbus, Ohio, advocates the use of motion sensors that automatically turn off lights when rooms are empty, in addition to the use of longer-lasting fluorescent and halogen light bulbs.

Such energy-efficient bulbs cost more but they also last significantly longer, and give off less heat than incandescent bulbs, which can help reduce energy costs associated with air conditioning.

“As bulbs burn out, replace then, which helps spread out the cost,” he says. “That’s so easy, it’s almost, ‘Shame on you for not doing it.’”

Air handling is also a key area. Exhaust hoods often aren’t balanced to the needs of the kitchen, Lombardi says. Too much exhaust can pull out cooled air from the dining room, while not enough exhaust can allow heat and odors from the kitchen to spill out into the dining area. Both can cause the air conditioner to work harder, which in turn increases that energy bill.

The gold standard for eco-friendly building design is the Leadership in Energy and Environmental Design, or LEED, certification. Starbucks Corp., for example, has a LEED-certified unit in Seattle, as does a McDonald’s franchisee in Savannah, Ga.

The LEED guidelines look at all aspects of a building, from the use of recycled materials in construction to the use of waterless urinals in bathrooms.

Los Angeles chef Akasha Richmond is debating whether to go for LEED certification as she builds her new restaurant Akasha, which she hopes to open in November.

However, Richmond says qualifying for LEED certification is estimated to cost around $10,000 to deal with the paperwork alone.

“We’re still debating the relative value of having certification,” she says. Instead, she may use LEED standards as guidelines looking specifically at aspects that she believes will ultimately result in energy-cost savings.

The upscale-casual restaurant and catering operation with an adjoining bakery, for example, will aim to have all energy-efficient equipment and lighting systems, insulation made of recycled paper, and ceiling fans and windows to encourage natural air flow, as opposed to air conditioning.

Richmond is considering whether to install rooftop solar panels to supplement electricity, and she’s looking at “dual-flush” toilets, which have two flushing options, depending on the type of waste, aimed at lowering water use.

Akasha’s menu will focus on organic and seasonal ingredients, locally produced whenever possible. The restaurant will serve house-bottled, filtered tap water that Richmond plans to price at $4 to $5 per bottle.

“We’ll do everything we can, but we’ll recognize that we’re not going to be 100-percent [green],” she says, noting that the limitations of a budget lurk behind every decision. “The ‘green’ dining room chairs that we loved are $700 each. But we can only spend $150 on a chair.”

Still, Richmond acknowledges that many of her green choices are adding significantly to the cost of opening, which will ultimately impact menu pricing for the restaurant, whose average tabs are expected to be about $20 per person at lunch and $40 to $50 per person at dinner.

Sustainability is an important value to Richmond, a caterer and founding chef of the quick-service organic-foods outlet Eaturna in Los Angeles, who has long promoted the use of organic and natural products. In addition, Akasha is being backed by founders of the Whole Foods grocery chain, who were early adopters in the organic- and natural-food world.

“Things can translate to the bottom line in different ways,” Richmond says. “Will more customers come to our restaurant because it’s a green restaurant? Yes, we think they will.”

Others say their efforts to go green may never even be noticed by customers.

“It’s a new way of living, not a marketing thing,” says Debra Sarokin, a consultant working with the frozen-yogurt shop Sno:LA, which opened in Beverly Hills, Calif., earlier this month.

In addition to using organic produce from sustainable local farms for its yogurt, the shop’s eco-friendly design includes the use of solar energy to operate the yogurt machines, and a counter-top made from recycled computer chips. The walls are painted with nontoxic, soy-based paint, and the yogurt is served in clear cups made from corn that look like plastic but are biodegradable.

The cups, for example, cost two to three times more than a comparable plastic version, she says.

“For the most part, it is more expensive [to go green],” she concedes, noting that the group of unnamed celebrity investors behind the concept is planning a second location to open in Malibu, Calif., later this year. “But it’s an investment in what we believe in, and it supports our philosophy and the culture of our business.”

For some, the application of eco-practices may be purely altruistic.

Others, however, see the green movement as a significant point of differentiation for a brand, says Leondakis of Kimpton.

“More and more consumers are choosing to spend their money with businesses that share their values,” she says, “and we believe that will become even more important down the road.”