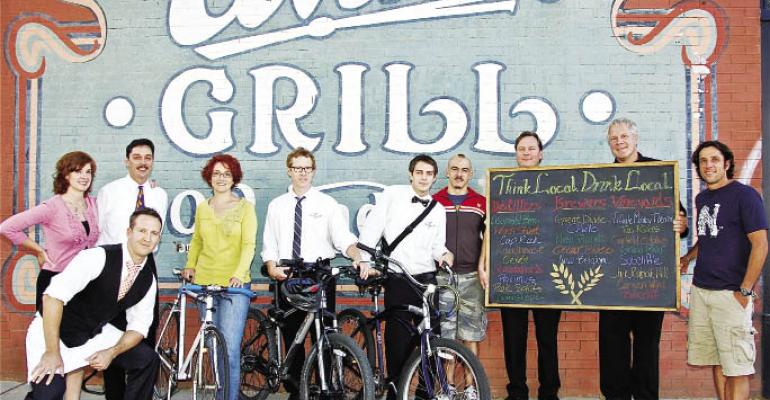 Eco-conscious Denver restaurants band together to make an impact

Hiring a company to dispose of compostable garbage is more expensive than regular waste disposal, but by joining together, a group of independent restaurants here were able to negotiate a lower price from a local vendor.

Compostable bins with gold-lined trash bags now stand at the back doors and alleys of a group of restaurants that are members of Eat Greener Denver, a subgroup of Eat Denver, a network of 55 independent restaurants in the metro area.

“When we started, no one had composting up and in place; now we have nine [restaurants], and three more who are about to join,” said Adam Schlegel, co-owner of Snooze, a breakfast and lunch restaurant with two locations in Denver, a third in Fort Collins and a fourth about to open in the southwest metro area.

United by a desire to become more environmentally responsible, about a dozen restaurants joined the Greener group to share information and resources on everything from motion-detection lights and  local-food producers to rewarding employees for energy conservation. Working together provides economic benefits, and the group’s attention to sustainability is strengthening customer and employee relations, said the independent operators. The group’s work also is serving as a template for a future city-sponsored environmental-certification program.

The Denver P2 Partners assists businesses with energy audits and consultations and helps with obtaining compliance and permits. Schlegel came to Burgesser for help with Eat Greener Denver. Burgesser was so impressed with the group’s work that she is using it to create a third-party certification program for restaurants. Once the certification is up and running this fall, restaurants that meet its requirements will be able to display a decal in their windows.

“Some businesses realize this is good for them,” Burgesser said. “For others, I have a tough time when I talk to them. These guys [Eat Greener Denver] were already buying in on this and serving as mentors to other businesses.”

Shelly McCandless, general manager of the Avenue Grill; Stephanie Bonin, co-owner of Olivea, Duo and Café Colore restaurants; and Schlegel started the Greener group to pool resources. As independents, they were incrementally furthering sustainable practices but quickly realized there was power in numbers.

“We were running around like chickens with their heads cut off, trying to do everything,” Schlegel said. “If we can just do one thing a month, in 12 months we will have taken substantial action toward greening our restaurants.”

Eat Greener Denver developed a 12-step program — one environmental assignment to complete every month, such as switching to low-energy LED lights or using earth-friendly cleaning supplies. The group holds monthly meetings and invites speakers from federal, state and city agencies, including the Environmental Protection Agency and Excel, the local utility company.

The Avenue Grill began offering deeper discounts to employees who personally reduced emissions by using the bus or a bike to get to work. The restaurant also made space in a storage room to give employees a safe place to park their bicycles while at work.

“We saw an increase in the number of employees riding bikes or taking the bus,” McCandless said. “It’s not like it’s a huge discount, but they love it. They are very proud to ride their bikes.”

An environmental consciousness also is now part of the job interview process at Avenue Grill, she said. Not only is she asking candidates about their attitudes on local sustainability and conservation, but applicants also are asking her what the restaurant is doing to be eco-friendly.

“I just hired a busser who was excited to know we recycle and compost; the place he is at now does neither,” McCandless said. “It’s fun to see people want to work in that environment. And if people do not have any community connections or have never done charity or [don’t] understand green initiatives, maybe this is not the right choice for them.”

Customers, too, are expressing interest in a restaurant’s environmental efforts, Schlegel said.

“Five years ago, if you went to a restaurant and got your takeout or leftovers in Styrofoam, it was a bummer,” he said. “Now, if you get it, you don’t know if you want to come back. Consumers are more conscious of where they are shopping and what kind of food they are buying.”

Still, many restaurants are not making any efforts to be green, and it may be a bigger challenge for independents that have fewer resources and less time to focus on conservation, noted Eat Greener Denver members.

“I was surprised at how many restaurants are not doing anything,” said Brooke Bishop, director of operations for Olivea, Duo and Café Colore. She monitors sustainability efforts at all three restaurants and reports their progress to Eat Greener Denver.

Olivea and Duo now have low-flow toilets. All of the restaurants switched to a local paper products company that offers recycled paper goods. They also started composting. The composting company sent representatives, including Spanish speakers, to train employees on what is compostable.

“It’s great to be a part of something that is making a difference, and not just on a small level,” Bishop said. “Doing things at home is great, but it’s nothing compared to the amount of waste restaurants produce. You can make a difference on a higher level.”