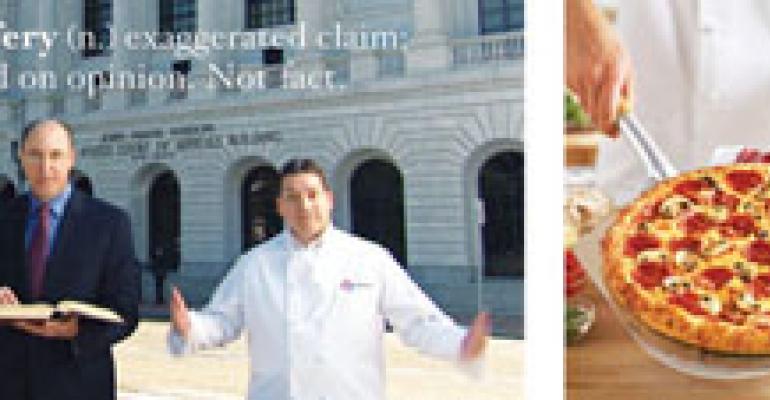 It didn’t have the Tiger Woods scandal’s sex appeal or the corporate comeuppance of Toyota’s recall, but Domino’s Pizza’s mea culpa came at a time when Americans were getting attuned to and cynical of the public apology.

While Domino’s never hurt anybody with its former recipe, the 8,886-unit pizza chain still felt compelled to reformulate its core product when consumers persisted that it “tasted like cardboard.”

“We had a focus group web-cast to our team,” said Brandon Solano, vice president of brand innovation. “When somebody’s saying something terrible about your pizza, you never get used to it, but for the first time all our executives were face to face with it. They couldn’t believe it. We all said: ‘We can’t just go to the next meeting. We have to do something.’”

So when Domino’s needed to show consumers what it was made of, it changed the makeup of its pizza. “[Former chief executive] Dave Brandon challenged me,” Solano said. “He said, ‘Make it way better.’”

Domino’s tested 36 different combinations of crust, cheese and sauce until it arrived at the reformulated pizza. After about 18 months of research and development and consumer testing, it rolled systemwide on Dec. 27, 2009, the new pizza, with a new cheese blend, a more robust sauce and a garlic-heavy crust. Rather than tweaking the taste to fit the lowest common denominator, Solano said, Domino’s swung for the fences.

“It’s an old model to have middle-of-the-road food,” he said. “You can’t be acceptable to everyone; you have to be people’s favorite.”

The trick then was to reintroduce Domino’s and its new pizza to customers who either agreed that the old one tasted like cardboard, or who’d at least heard the criticism enough to believe it. To do so would require acknowledging that many consumers thought the old product’s taste fell below Domino’s standard for service, Solano said.

“There has to be a reason to believe advertising,” said Andrew Keller, a Crispin partner and co-executive creative director who developed the campaign. “It made sense to let people know that we knew there were issues with the old pizza, and that’s why we’re making changes. Honesty would create a pathway to allow for communication around the new pizza that would not be disregarded.”

Advertising the pizza honestly meant putting the chain’s new chief executive, Patrick Doyle, in front of the camera to admit that he’d heard what focus groups had to say and that he took it to heart. Those 30-second spots then pointed viewers to a special website, , featuring a four-minute documentary which chronicles Domino’s employees’ reactions to negative focus group comments and their quest to develop a better product.

“We wouldn’t make a film like this because we can, but we thought it was compelling,” Keller said. “We wanted people to get to know Domino’s employees…and at the same time know that this sort of criticism hurt them personally, and they felt responsible to do something about it.”

The website also ran viewer comments and tweets linked from Twitter—positive and negative.

“The most important thing about advertising is the discussion,” Keller said. “I think it builds the credibility, because we’re building a conduit to consumers to talk to us about our products. The world’s evolved with the Internet and social media, and it’s crossed a line where everything’s out in public.… There’s really no way to manage public opinion in that respect, so you’re better off making use of it.”

In Domino’s case, that advertising honesty was useful, at least according to data from Ace Metrix, the marketing analytics firm whose “Ace Score” combines an advertisement’s persuasiveness and “watchability.”

The chain’s 15-second and 30-second spots, which debuted the last week of December, had respective Ace Scores of 586 and 665, besting the pizza segment’s average Ace Score of 579. The 30-second commercial is the best-scoring restaurant ad in Ace Metrix’s system, said Jack McKee, vice president of marketing, who added that a follow-up commercial, where Solano and another R&D chef surprise formerly critical focus group participants with new pizza, also scored a 626.

“I wasn’t sure what to expect with these frank ads, coming clean rather than taking a humorous approach, but these have been doing well,” McKee said. “We’ve seen consistently that the Toyota recall spots and the GM ads during their bailout also overachieve, compared with industry averages.”

Domino’s Ace Score fell back below the industry average in its latest commercial, which scored 516 and stars Solano, who accuses Papa John’s of “puffery” because its “Better ingredients, better pizza” tagline doesn’t jibe with the results of a national taste test. But Solano and Crispin’s Keller agree that the turn-around-focused spots show that honesty was the best policy.

“Honesty is becoming more and more valuable, because it’s potentially in short supply in advertising,” Keller said. “The fact that Domino’s was willing to do this says a lot about them.”— [email protected]