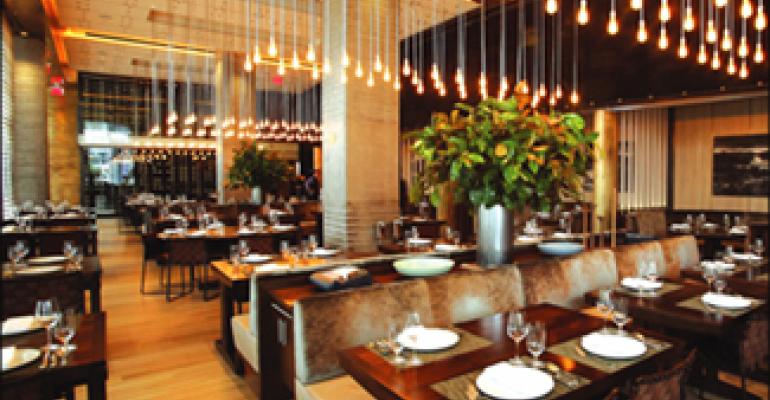 As a flurry of multimillion-dollar and billion-dollar hotel, condo, retail, amusement park and mixed-use developments dot the nation, some of the restaurant industry’s most popular chefs and prosperous foodservice groups are being tapped to oversee the dining operations in those projects.

Whether it’s a management contract to span several years, or a genuine partnership where the operators bring a few dollars to the table themselves, or a turnkey operation in a swanky new project, industry observers say they are awed by the many high-end agreements. Among those to recently ink such deals are high-profile chefs Jose Andres of Washington, D.C., Tom Colicchio of New York and Chicago-based N9NE Group.

Driving the trend is the dawning recognition by deep-pocketed real estate developers and hoteliers that—despite their passion for building luxury hotels, opulent retail atmospheres or state-of-the-art office centers—they do not have the know-how to run high-quality, destination foodservice operations.

Drew Nieporent, president and partner in New York’s Myriad Restaurant Group, was a front-runner in such partnerships. Hoteliers such as the hip W Hotel and Marriott chains have tapped his stable of fine-dining restaurants for more than a decade. Such partnerships provide developers with foodservice expertise without the expense, he said.

“What you used to have was a food and beverage director, basically one guy responsible for creating the restaurants, taking care of the room service, finding the vendors, writing the menus, conceiving of the projects,” Nieporent said. “There’d be a homogenous element to it, and in most cases they were not executed that well. If something went wrong, if the chef was bad, they were stuck with him.

“So as time went on, it became obvious that they were better off going to independent restaurateurs who had a track record to build an amenity in the hotel for their guests, but an amenity that could also lure in the tourists,” he added.

While Nieporent cautioned that issues of control over the restaurant operations sometimes arise because the restaurateur really doesn’t own the property, other operators say something more seductive always manages to quell disputes: money.

“We know how to make money, and we’re pretty good at it, and wouldn’t you know it, these big real estate and hotel people tend to like that kind of stuff in their partners,” said Michael Morton, president of N9NE Group, explaining why his Chicago-based foodservice and nightclub business is fighting off more projects than it can handle. Morton’s restaurant ties are in his blood. He is the son of Arnie Morton, the late founder of Morton’s, The Steakhouse, and younger brother to Peter Morton, co-founder of the Hard Rock Cafe.

Once late-night impresarios with nightclubs and dance halls, N9NE has expanded its portfolio to include an upscale steakhouse and a fine-dining Italian dinner-house concept, some 14 units in all, estimated to do more than $30 million this year.

“In a real sense, the developers are silent partners in our business,” Morton said. “They don’t want to be in the restaurant industry. They don’t want to micromanage us or tell us what to do. They are in the real estate business and they bring us on as co-managers, yet we have total control of what happens in the businesses we operate.”

For this reason, developers seek out for partnerships not only those chefs who are visible, popular, established and creative, but those with business acumen, management skills and an organizational infrastructure that can support growth.

But even with an infrastructure to maintain the quality standards of their signature restaurants while they travel to distant cities to clone their operations, some celebrity chefs note that while the rewards are high, so too are the demands for stamina.

“Do I like traveling across the country as frequently as I am? No,” said Tom Colicchio, the award-winning chef-founder and chief executive of New York-based Craft Worldwide. “But I made a commitment to these guys and there are guys [on my staff] who are committed to me, and I don’t think we’d be where we are today if I didn’t have the infrastructure and the staff that frees me up to focus.”

Colicchio was referring to deals in which brands in his portfolio, including Craft, Craftsteak and ‘wichcraft, are anchoring or will anchor the foodservice operations in some of the nation’s most luxurious hotel, condo and commercial developments.

Having never sought or solicited a development project, Colicchio expressed pride that others broached all of the deals he is involved in. But despite demand for his showmanship and talents, Colicchio said he intends to commit to no more than two to three such projects every other year.

“We turn down far more deals than we accept,” he said. “Last year we were offered 20 deals. Know how many we took on? Two. You can’t do everything. We try to do the deals that make the most amount of sense.”

Colicchio recently debuted Craft in a standalone building featured as an amenity at the new W Hotel in Dallas. Part hotel, part condominium, the W is part of the 75-acre urban development project known as Victory Park, billed in its marketing material as “aspirational urban living” and promoted as “the most vibrant and innovative, mixed-used urban district in the country.”

Built by Hillwood and Hicks Holdings—whose principal partner is Ross Perot Jr.—Victory Park is being built in three phases and has a projected price tag of $3.4 billion. In addition to the W hotel tower, the area currently features two five-story retail buildings, an office skyscraper and the Dallas Mavericks’ home court at the American Airlines Center. By the time it is finished in 2011, it will have two more towers, outdoor recreational and sports fields, and a DART station, part of Dallas’ rapid-rail transportation network.

Joining Colicchio’s Craft at the location are three of N9NE’s operations: N9NE Steakhouse, the fine-dining Italian concept Nova Italiano, and Ghostbar, an upscale lounge in the penthouse of the hotel. Four other restaurants from other operators also will be located in the complex.

Colicchio said that he is sure his new partners in Dallas approached him because they liked his organizational strength and staff support.

“They realize that I have six restaurants, a television show [“Top Chef” on Bravo], and they want to know that if something happens, there’s someone else they can go to when I’m not around,” he said.

Colicchio said that when developers pitch him to open units in their places, he makes sure that his entire management and culinary team participate in the discussion so both teams get to know each other.

However, a celebrity chef ’s business acumen and support staff may be overemphasized, said Arash Azarbarzin, president of the Los Angeles-based SBE Hotel Group, a division of SBE Entertainment Group, which a few weeks ago announced plans to build what is billed as the most luxurious, up-market chain of hotels ever conceived in the United States.

In a management contract with Starwood Hotels & Resorts Worldwide to operate the first hotel in the new division—to be called SLS hotels—SBE has recruited Jose Andres of the Washington, D.C.-based Think Food Group, an award-winning chef and an inductee in the James Beard Foundation’s Who’s Who of Food & Beverage in America.

Andres, who was born in Spain, specializes in tapas and eclectic small plates at three of the seven critically acclaimed restaurants the company operates in Washington. His mission will be to create a signature restaurant for the SLS prototype—a conversion of the newly acquired Le Meridien Hotel in Beverly Hills, Calif.—and subsequent branches that also will feature Philippe Starck designs.

“Chef Andres’ business sense and past achievements are important to us, but it’s not why we asked him to partner with us in this deal,” Azarbarzin said. “It really helped that he ran a very successful organization, but it was his passion for food and what he does with it that was a much bigger and more important consideration for us.”

It’s the one-two punch of having great concepts and good business sense that keeps the list of development partners seeking to team up with Ebrands Restaurants growing, said Charles Robinson, chief operating officer of the 14-unit, diversified dinnerhouse company based in Orlando, Fla.

Just a year ago, the company formed a joint venture with celebrity chef David Burke to open a fine-dining, eclectic American restaurant under Burke’s name in the Venetian Hotel, where Ebrands’ first venture in Las Vegas, the fine-dining seafood concept Aquaknox, continues to play well.

Now the company has teamed up with the giant real estate development company Cousins Properties of Atlanta to open a version of Aquaknox—along with other restaurateurs’ signature operations—in Cousins’ forthcoming Terminus, a mixed-use hotel, retail, condo and entertainment complex, similar in spirit to New York’s Time Warner Center.

Covering 10 acres and costing about $600 million, Terminus is nearing the first phase of its completion this spring and will be located at the toniest intersection in Atlanta’s upscale Buckhead neighborhood.