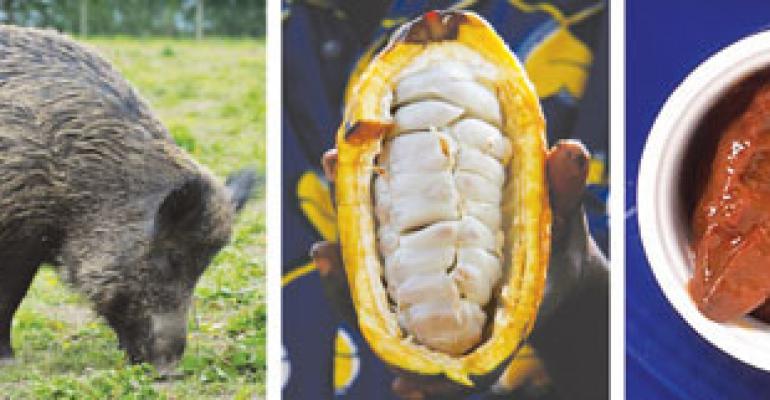 Terminal Five, JetBlue airline’s brand new home at John F. Kennedy Airport in New York City, is at the heart of efforts to create a new standard in airport dining.

In charge of it all is chef Michael Coury. A native of Central New Jersey, Coury worked under Craig Shelton at The Ryland Inn in Whitehouse, N.J., as well as with chefs Mario Batali and Charlie Trotter. His formal education includes stints at the French Culinary Institute in New York, The California Sushi Academy in Los Angeles and Toscana Saporita near Viareggio in the Italian region of Tuscany.

Coury takes twice-weekly trips to the farmers market in search of local seasonal products and sees himself as breaking new ground in dining trends.

“For the first time I feel like I’m on the front-wave of something rather than behind the eight ball,” he says.

Despite Coury’s multicultural culinary education, his real love is Italian food, but he is expanding his repertoire, and that’s reflected in his favorite ingredients, which include Italian staples like wild boar and chestnuts, the Mexican ingredients epazote and chipotle, as well as chocolate, which is used in both cuisines. These days, Coury is especially taken with an organic Mexican chocolate grown on former banana plantations.

Spanish conquistadors introduced pigs to Florida 500 years ago. Some of them escaped and they have been running wild ever since, now living in half of the 50 states, according to a report aired on National Public Radio’s Weekend Edition. The report estimates that two million of them live in Texas alone, where ranchers in recent years have learned to round them up and sell them.

That’s where Coury gets a lot of his wild boar, which also is a favorite meat in parts of Italy, where it is called cinghiale.

“Just like anything that’s wild, it lives off the land and I think it picks up a lot of the [flavors of the] surroundings and the environment—a bit gamier taste,” than conventional pork, Coury says.

He buys primal cuts and likes to use tougher, more flavorful meats in a long braise. For those he seasons it thoroughly and then sears it.

Then he makes a really dark, caramelized mirepoix—so dark, it’s “almost like you wouldn’t want to use it.” He adds tomato paste to that, cooks it well and then adds the boar, red wine and vegetable stock. He covers it and lets it “go to town,” cooking it for five to eight hours.

“If it’s a shoulder or something else with a bone, I cook it really slowly to extract the marrow,” he says. Then he pulls the meat apart and rough-chops it, adjusts the liquid level and, in the style of Italy’s Piedmont region, adds some tomato paste and chocolate.

JOB: concept chef for OTG Management, Jamaica, N.Y.CAREER HIGH POINTS: In New Brunswick, N.J., “I got to cook a dinner for [members of] the de Medici family,” which ruled Florence, Italy, during the Renaissance.TYPICAL BREAKFAST: granola and yogurt, or a pork roll, egg and cheese sandwichFAVORITE SNACK: hard pretzelsBEVERAGE OF CHOICE: Italian red wineINGREDIENT YOU’D LIKE TO FIND BUT CAN’T: affordable and consistently available white truffles

Lately he has been playing with an organic, stone-ground Mexican chocolate.

“It definitely has a mealy, polenta-like feel in your mouth,” he says. “When you’re eating it you can taste hints of banana because where they grow the chocolate is on old banana plantations.”

He adds about two ounces of it to a braised boar shoulder. “I want it to be a subtle background flavor that makes people wonder where it comes from,” he says.

Traditionally, that boar ragú would be served with wide pappardelle noodles and roasted chestnuts. For that dish, Coury roasts the chestnuts himself, rubbing them in olive oil and salt. After they’re done cooking and split, he shells and rough-chops them.

But Coury does other things with chestnuts that don’t require that he do all the prep in-house himself.

“In the fall I always make a chestnut soup that does very well,” he says. And for that he gets pre-roasted, frozen chestnuts, imported from Italy.

He says you get more natural oils by roasting your own chestnuts, but for soup the frozen variety is a great labor-saving short cut.

“My dishwashers love them, too, because they don’t get carpal tunnel,” from peeling the nuts themselves, Coury says.

An important herb in the cooking of central Mexico caught Coury’s eye as he worked to open Revolución, the Terminal 5 restaurant focusing on that country’s cuisine.

“It gives us the authenticity that we’re looking for,” says Coury, particularly in braises, as well as in their black beans.

Epazote, which grows in tropical and subtropical climates, has reportedly been used in Mexico for centuries. Mexican-food expert and consultant Roberto Santibañez, former executive chef of the New York-based Rosa Mexicano chain, says it was not traditionally available in northern Mexico, so cooks there used cumin to try to emulate its taste.

Coury says epazote is used like bay leaf, added early on to braises for another layer of flavor.

Chipotle is one of the most popular flavors on American chain menus these days, but Coury enjoys using the peppers themselves, which are smoked and dried jalapeño peppers.

“These things look like sun-dried tomatoes,” he says. They’re rehydrated with hot water, puréed, and then used as a base ingredient for a wide variety of sauces. Since Revolución’s sauces are all vegetable-based, the chipotle’s smokiness adds a meaty body to them without actually adding meat.

Coury warns that sauces with any dried chiles should be made extra-spicy, because the heat dissipates over time. “So usually you have to add more spice,” he says.