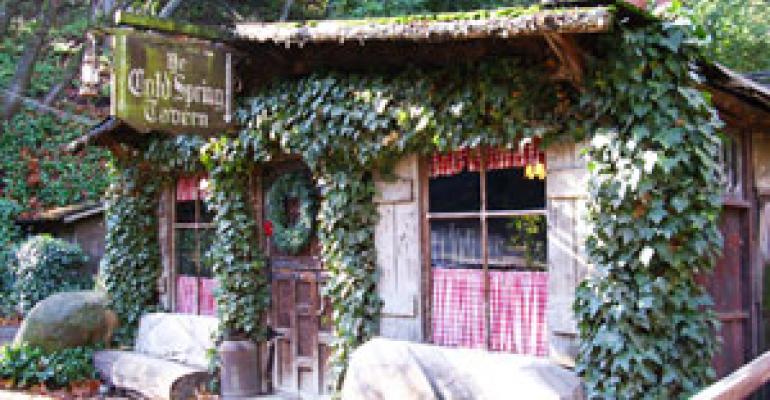 When it comes to transportation methods to Cold Spring Tavern, the 145-year-old restaurant and bar tucked along a creek deep within the hills above Santa Barbara, Calif., two wheels have largely replaced four legs.

“It’s a pretty awesome site, and it’s an excellent place to eat,” said John Crockett, curator of the Santa Ynez Valley Historical Museum and Parks-Janeway Carriage House, of the establishment that started as a stagecoach stop. “But don’t go on Sunday. That’s when all the bikers go there.”

Known as much for its wild game dishes such as rabbit, wild boar and venison as for its history, Cold Spring Tavern, with its wood-paneled dining room, stone hearth fireplaces and mounted animal heads on its walls, was rustic before the term was coined. The 3,000-square-foot main restaurant and bar — there’s also separate bar area next to the restaurant’s sloping dirt parking lot — seats about 70 people and regularly serves about 110 lunches and 120 dinners a day, according to John Locke, the restaurant’s general manager for a decade. Cold Spring Tavern — not “Springs,” as it’s often called — which also has live music four nights a week, provides a snapshot of California history for customers ranging from longtime locals to out-of-state tourists to the aforementioned bikers.

“It’s the same,” said Stuart Churchill, who met his wife Joanne at the Tavern 28 years ago and in late December made a trip back there with her for the first time since they moved to Steamboat Springs, Colo., from Santa Barbara about 15 years ago. “The moss on the roof is a little thicker, but that’s about it.”

Cold Spring Tavern’s aversion to change — three of its 25 employees have worked there for more than 20 years — appears to have served the restaurant well. With many restaurants’ 2009 sales down between 10 percent and 20 percent, last year’s sales at Cold Spring Tavern, whose check average is about $15 for lunch and $30 for dinner, were about $1.7 million, or about 7 percent less than its 2008 revenue.

Along with Brothers’ Restaurant at Mattei’s Tavern in nearby Los Olivos and the Sycamore Inn in Rancho Cucamonga, Cold Spring Tavern, is one of a handful of California restaurants still in operation that started their lives as stagecoach stops.

Situated on a 40-acre property with 52 springs, Cold Spring Tavern first opened as a rest stop in 1865 as Chinese laborers built a toll road over the San Marcos Pass connecting the Santa Ynez Valley inland with Santa Barbara on the coast. The toll road, which charged $1.50 for a four-horse buggy, according to a plaque on the site, was part of a network of stagecoach and rail routes that connected northern and southern California. It was built because the route was shorter than the one along the coast between Avila Beach and Santa Barbara, said Crockett, who estimates he’s visited the Tavern about 20 times.

Because of the pass’s steep grade, stagecoach horses had to be changed out before cresting the nearby summit, necessitating a rest stop for travelers that became Cold Spring Tavern, he said, adding that old stagecoach tracks can be spotted nearby.

But whereas Mattei’s, which began operations 20 miles northwest of Cold Spring Tavern in 1886, largely has been upgraded in the past decade, Cold Spring Tavern’s hodgepodge of structures, which include the Ojai Jail and a tiny bunkhouse where the toll road’s builders used to sleep, have remained largely untouched. Owned by the Doulton family at the turn of the 20th century, the restaurant and its springs were purchased by Adelaide Ovington and her daughter Audrey in 1941 for $2,000. With Audrey Ovington having passed away in 2005, the Tavern now is owned by her niece, Joy Ovington Wilson, and her husband, Wayne Wilson.

As for the clientele, Cold Spring Tavern brings in what Locke calls “a total cross-section of customers” ranging from families celebrating special occasions to the weekend motorcycle enthusiasts who’ve been frequenting the Tavern since the 1950s. With such a variety of customers, business patterns — save the occasional forest fire or storm that shuts down the local roads once every couple of years — haven’t changed much more than the restaurant’s folksy décor, justifying the restaurant’s resistance to change, according to restaurant consultant Janet Lowder. She also noted that the restaurant has stayed in business despite its remote location and relative lack of publicity.

“It’s a tough call” on whether to upgrade the facilities and change the menu or to keep things the same, said Lowder, president of Rancho Palos Verdes, Calif.-based Restaurant Management Services. “You have something where people enjoy going. If you change it, they might not come back.”