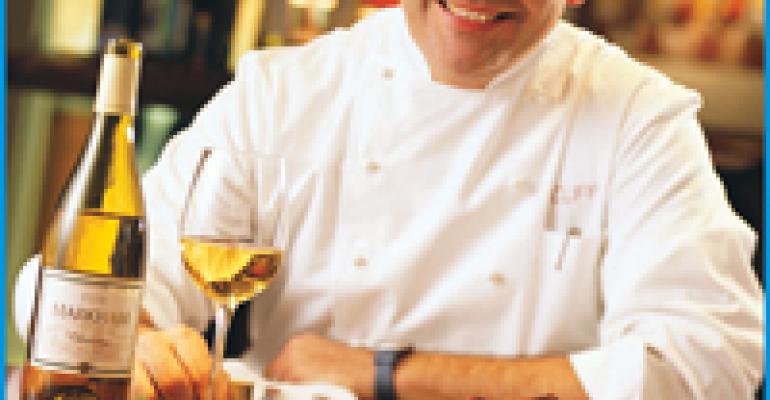 People who know Clifford Pleau say he has a passion for development and leadership. Anette Grecchi Gray, chef de cuisine at Disney’s Animal Kingdom Lodge in Orlando, Fla., says Pleau is “paving the way” for other chefs who eventually will follow the path of more healthful cooking.

That passion has served Pleau well in his role as director of culinary development for Seasons 52, even though he admits he did not give nutrition much thought during his first two decades or so as a professional chef. But since leaving Disney to join Darden Restaurants Inc. in 2002 and open the Seasons 52 concept, he calls nutrition “the No. 1 gate.” “Nothing happens unless the nutrition works tight,” he says.

Currently, Darden operates seven Seasons 52 locations—five in Florida and two in Georgia. The company had been researching the idea of opening a casual concept with lighter, more healthful fare for about 10 years when Pleau was tapped to transform the vision into reality.

Before Seasons 52 served its first customer, Pleau and his team spent about a year developing a menu and planning every operational detail. With a background that combines classical French training and plenty of experience with seasonal, California-style cooking, Pleau had found that his cooking over the years had become lighter. However, it still proved challenging initially to develop an entire menu on which no serving could exceed 475 calories—the parameters established for Seasons 52 dishes.

“In the beginning, it seemed like such a nightmare,” Pleau says. “We went from the bucket of olive oil on the line with a 4-ounce ladle in it all the way down to now, [where] we only dispense oil through a spray bottle, a little spritzer.”

Each trigger pull yields about one calorie’s worth of oil.

These days developing recipes to meet the under-475-calorie profile has become second nature to Pleau. For starters, Seasons 52 uses no butter, has no deep-fat fryer and relies on nonstick pans for sautéing. A key to producing good-tasting dishes with a healthful profile, Pleau says, is to rely on seasonal ingredients and to “go after the best product we can get our hands on.”

In addition, he says, “we will use things that deliver intense flavor, bite by bite.” Instead of using the delectable but high-fat mascarpone, for example, Pleau has found that strong-flavored cheeses such as Parmesan, blue cheese or goat cheese give a dish excellent “punch,” even with as little as half an ounce. Presentation also is important at Seasons 52, where Pleau’s strategy is to “spread it out versus stack it up, and don’t hide the ingredients.”

Of course, when it comes to running a restaurant, culinary sleight of hand and nutritional profiles alone do not suffice: The food must also taste great. Besides making it through a rigorous development process that follows strict nutritional guidelines, each product that makes it onto the menu at Seasons 52 has been through an intensive consumer review process, Pleau explains.

“Let me tell you,” Pleau says about assembling a consumer taste panel, “when you put them in a room, and you let them be chef for half an hour, it’s pretty humbling sometimes.”

People who know Pleau describe him as having talents far beyond his prowess at the stove.

“The first thing I recall about Cliff is being impressed with his cooking abilities,” says Tim Ryan, president of The Culinary Institute of America. “He’s just a fabulous chef. But as you get to know Cliff and watch him in action, he’s equally impressive as a manager and a leader, and he really has managerial and leadership capabilities that I’ve seen in very, very few chefs.”

Grecchi Gray of Disney has worked with Pleau at three different jobs and credits him with playing a key role in her own career success.

“He’s very hands-on and very inspiring,” she says. “He ‘walks the talk,’ is what I always like to say about Cliff. He is very intellectual, and he is very inspiring. He does like to share his experiences. He has no secrets. Whatever he knows, he’ll be willing to share, and I think that also makes him a great partner and a great mentor to a lot of others.”

Dieter Hannig, senior vice president for food and beverage at Walt Disney World, believes that Seasons 52 has “floated the boat” for others in the casual-dining arena that may wish to pursue a more healthful menu. Hannig also praises Pleau for making a difference in the lives of people with whom he works and for embodying the healthy lifestyle extolled by Seasons 52. Hannig, one of Pleau’s former bosses at Disney in the United States and Europe, has run in a number of marathons with Pleau.

Hannig says Pleau’s influence at Disney has been long lasting, and many of the senior culinary employees there today learned much under Pleau’s leadership.

“A lot of folks, when they have a problem with work here, pick up the phone and give Cliff a call,” Hannig says. “He hasn’t changed. Sometimes when people grow up in life and their profession, they are not the same anymore. Their egos get a little bigger. But Cliff is always the same and takes time to talk with people and enjoy life.”