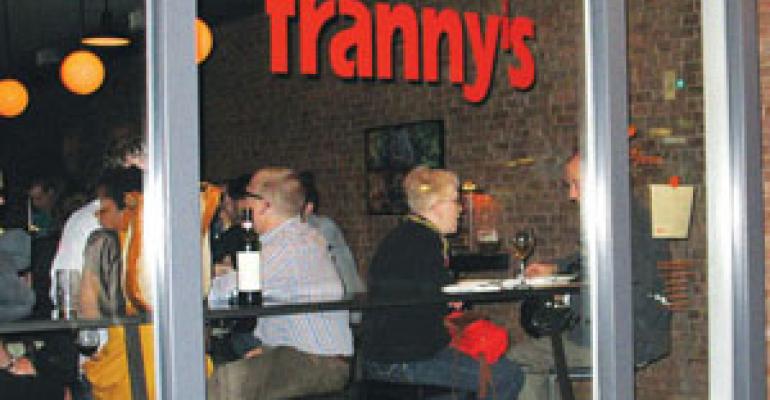 A Brooklyn neighbor of Franny’s in the bustling Williamsburg neighborhood, Barcade, operates as a kind of modern penny arcade with more than 100 beers from around the world and uses the same utility sources. Like Franny’s, Barcade elects to pay more for energy, but all of its payments are allocated toward wind power development.

However, it would be inaccurate to say renewable resources power Franny’s and Barcade, since the restaurants must get their electricity from the same power grid to which all other users are connected. As in most big, metropolitan areas, whatever “green” power augments the New York City area remains a minor part of a huge energy trough fed by numerous conventional power plants, both coal-driven and nuclear.

But the still-lagging contributions of renewable-power sources are not undermining the enthusiasm felt for those emerging alternatives in many quarters of the restaurant industry. From its most dominant brands to its highest-profile independents, more operators are supporting renewable power from wind, water and solar sources that do not produce greenhouse gases.

In ways big and small, obscure and prominent, such operators are staking the future of their energy purchases and uses on green power while at the same time looking at ways to reduce their operations’ carbon dioxide emissions.

For most, hooking up with renewable, green energy suppliers and reducing carbon dioxide outputs are the same side of the coin.

Executives of 580-unit Chipotle Mexican Grill are reviewing a new restaurant prototype that not only is environmentally friendly, but will feature so-called “tankless” hot-water systems for its kitchen and restrooms that do not require the useless burning of energy to store heated water in a tank when it is not needed.

Executives for big chains and chefs of independent restaurants say they make those kinds of moves not because it saves them money. In fact, it is more expensive to go green with renewable energy sources or tankless hot-water systems. Instead, they say, they do it because they believe it’s the right thing to do for the environment.

And while they don’t necessarily expect their green motivations to boost sales or attract herds of like-minded patrons, many are letting their customers know that as small as their investments in alternative energy might be, they hope that patrons get the message and take similar steps on their own.

Having just garnered a coveted two-star review from The New York Times, Franny’s owner Francine Stephens and her husband, co-owner and chef Andrew Feinberg, use their menu to inform guests of the Brooklyn Heights establishment that running a restaurant, enjoying food and wine, and helping to preserve the environment are not incongruent pursuits.

In addition to listing the names and products on its menu of more than a dozen local organic vendors—from pork producers to coffee suppliers to hormone-free dairy farms—Franny’s also points out that it pays 35 percent of its energy expenditures to support “new wind” and 65 percent to support small hydroelectric plants powered by river-run waters through ConEdison Solutions, the alternative-energy division of Con Edison, one of New York’s dominant energy suppliers.

Up until recently, Stephens had spent most of her career consulting with businesses and chefs and counseling consumers about the economic and environmental benefits of buying locally grown foods. She also was active in the nonprofit organizations Mothers & Others for a Livable Planet and the Rainforest Alliance.

“You might think, why does a small, little restaurant in Brooklyn need an environmental policy?” she says. “Without one, we wouldn’t be Franny’s. Our philosophy was from the beginning that a restaurant that serves meats with no hormones or genetic manipulation and with organic produce sourced locally can make an environmental statement, as small as it may be, and serve good food.

“We promote local agriculture but we are also promoting renewable energy, and there is nothing we are doing that you or our guests can’t do at home, too. So maybe we are leading by example.”

Stephens says she knows her ConEdison Solutions energy bills are higher than are those of Con Edison’s original customers, who don’t subsidize efforts to reduce emissions of greenhouse gases into the atmosphere. Yet she doesn’t intend to make her customers share her dedication to that cause.

“We are not going to pass this price along,” she says. “Hopefully, the word will spread about what we are saying and doing here. I firmly believe that an educated guest, an educated consumer, can make an impact with their dollars, and we wield enormous dollars that could make a change for the better.”

Christine Nevin, director of business and media relations for ConEdison Solutions, says the reason green energy costs more than conventional power is a function of too little supply and too little, albeit growing, demand.

Comparing energy supplies in the New York metropolitan area to a giant tub filled with green sources and traditional power plants, Nevin explains that customers are free to choose whatever source of power they want. Since green power makes up a small part of what is contributed to the grid and is currently more expensive to develop, most customers opt for Con Edison’s traditional billing arrangement.

Unlike traditional power-generating stations, wind farms are costly, huge facilities that require a large amount of space. Even if such space exists in an urban environment with the appropriate wind conditions, the cost of real estate in most big cities would make wind farms financially prohibitive to build, explains Chris Olert, a Con Edison spokesman. The 1,536-acre wind farm that Franny’s dollars support, Nevin points out, is outside of Syracuse, N.Y., some 250 miles away.

The 65 percent of its energy bill that Franny’s pays to support river-run hydropower is for turbines in upstate New York and Pennsylvania driven by inexhaustible and emission-free sources.

Yet the fact remains that supporters of such alternative sources can’t directly tap them for their needs.

“When you turn on a light or fire up an oven, we can’t put an address on an electron and send to a specific location,” Nevin explains. “So all of the energy in that tub gets routed into the grid that all of the customers pull down on. But as more and more customers sign up for renewable sources, the cost will come down because we will be able to build more wind farms and add more hydroelectricity.”

However, critics say the development of wind farms can devastate wildlife habitats and landscapes.

“Wind power promises a clean and free source of electricity and that it will reduce our dependence on important fossil fuels and reduce the output of greenhouse gases and other pollution,” says Eric Rosenbloom, president of the Rowe, Mass.-based nonprofit group National Wind Watch. “But wind power does not live up to the claims of its advocates: that its impact on the environment and people’s lives is…benign.”

Nevin counters that National Wind Watch’s charges do not apply to ConEdison Solutions. Noting that the plants have been certified “Green-E,” an independent industry organization’s highest certification standard attesting that the plants are environmentally compatible, Nevin says Con Edison’s wind farms also comply with federal regulations that call for them to be built in areas not known as pathways for migratory birds. Moreover, she says, farmers near the windmills have not complained about the noise because the pylons to the blades are over 200 feet tall, move slowly and are hard to hear under the best of circumstances.

“I’m not saying those guys are wrong in some places, but their charges certainly do not apply to us,” she says.

While the debate over wind farming continues, restaurant operators are looking to become more green by changing other ways they do business.

Chris Arnold, a spokesman for Chipotle, says its forthcoming prototype could show more people the virtues of the 30-year-old European and Japanese tankless hot-water technology that recently began making inroads in America.

Unlike conventional hot-water storage tanks that are kept at a steady temperature, usually 120 to 140 degrees, tankless hot-water systems deliver those temperatures instantaneously after water flow activates a heating device.

Some restaurant companies are looking more holistically at their carbon footprints by helping allied businesses and vendors reduce their emissions. The practice is most visible when it comes to recycling used frying oils into so-called biodiesel fuels or ethanol additives.

Brooks Broadhurst, vice president of purchasing and distribution for Eat’n Park, says his company has teamed up with a green cooking-oil recycler, Steel City BioFuels of Pittsburgh. In the relationship, Broadhurst explains, Steel City BioFuels picks up used cooking oil from all of the operator’s 200 fast-food restaurants, full-service operations and institutional accounts and converts the grease into biofuels used in farm equipment and other vehicles.

Hard Rock Cafe is doing something similar, only on a national stage.

The day after the recent Farm Aid annual concert in New York’s Randall’s Park, the Times Square branch of the Hard Rock chain, whose motto for nearly 30 years has been “Save the Planet,” hosted another concert to show Hard Rock’s support for the Sustainable Biodiesel Alliance, a nonprofit group founded by Annie Nelson and actress Daryl Hannah. Nelson’s husband, country star Willie Nelson, performed at the Hard Rock event.

The alliance advocates that restaurant companies engage in farm-to-table activities that promote biodiesel usage in harvesting, production, distribution and recycling.