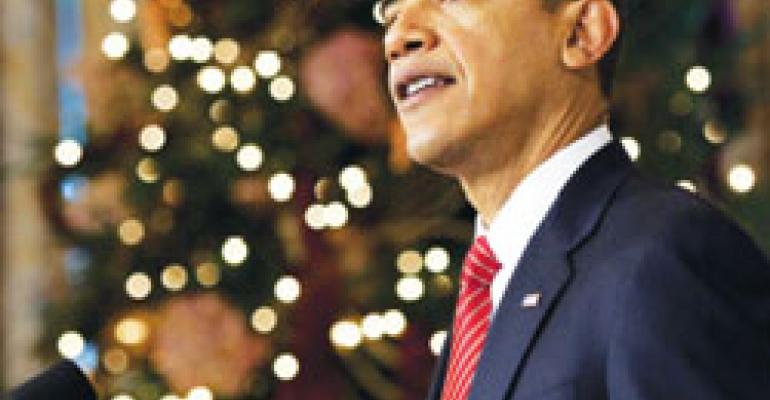 While pundits generally agree that not much of any real substance gets accomplished in Washington, D.C., during an election year, many are forecasting that 2010 will be an unusually busy 12 months for lawmakers.

The epic battle on Capitol Hill over health care reform is anticipated to spill over into January and possibly beyond as the House and Senate seek to reconcile two very different bills. However, health care is not expected to be the only controversial issue likely to vie for policymakers’ attention during an election year.

Other issues that may keep policymakers away from home and the voting electorate include immigration reform, climate change, card check, food safety, menu labeling, and a raft of tax- and job-related measures.

Health care—To be sure, the effort to extend health care coverage to the nation’s uninsured is still “the elephant in the room,” said James Greco, chief executive of Bruegger’s Enterprises in Burlington, Vt. “I do believe that [lawmakers] will pass something, and unless the measure is terribly watered down, it will impact business.”

Most experts agree that the Obama administration has too much riding on the passage of this issue to let it dissolve in inter- and intra-party squabbling. But assuming that some iteration of the measure passes both chambers, few are prepared to bet the ranch on what the final version might look like or how much of the bill will be footed by employers.

“Obviously, we want to make sure [the final bill] is as considerate as possible of the restaurant industry,” said Brendan Flanagan, director of government affairs for the National Restaurant Association. “We would like to see it include small-business exemptions like consideration for part-time workers, a waiting period of 90 days before [insurance must be offered] and a clearer definition of what constitutes a full-time worker.”

But other observers remain pessimistic about the bill’s final form.

“President Obama said he measures success by whether it reduces the federal deficit,” said David French, vice president of government relations for the International Franchise Association. “Our measure is whether it makes it easier for business owners to afford insurance, and this bill doesn’t do it.”

Immigration—As if health care were not controversial enough, Congress also is planning to rekindle the flames of immigration reform next year.

“We have to deal with the immigration issue pragmatically,” said Xavier Teixado, owner of Harry’s Savoy Grill in Wilmington, Del. “But it’s surprising that anyone has the courage to tackle it in an election year.”

Rep. Luis V. Gutierrez, D-Ill., fired the opening salvo when he introduced an immigration bill last month that seeks, among other things, to legalize the status of undocumented workers who meet select requirements. But the House measure, which has some 90 co-sponsors, is expected to be eclipsed by a Senate measure crafted by Sen. Charles Schumer, D-N.Y.

Scott Vinson, vice president of the National Council of Chain Restaurants, said immigration reform in 2010 would be “a tough sell.”

“It’s a controversial issue to begin with,” he said, “and if we thought it was tough passing immigration reform when the economy was doing well, it’s going to be doubly tough when we have 10-percent unemployment.”

Climate change—The climate change bill, also referred to as “cap and trade,” is likely to emerge as a key issue in 2010, experts said. The House passed the bill, which would mandate cuts in greenhouse emissions, in 2009, and the Senate is expected to address the issue in April or May. French said the measure would drive up energy costs over time in an effort to help conserve resources.

“A lot of business owners will be victims of collateral damage,” he said. “Higher costs will be a real concern for restaurant owners.”

Not surprisingly, the issue has sparked some debate within the industry.

“Most restaurateurs would like to be ‘green,’” Teixado said, “but when you’re looking at higher energy bills and operating costs, that is not likely to get a lot of traction.”

On the other hand, some operators “are resigned to it being passed,” Greco said. “But it will be phased in over a number of years, so I think it will be almost hard to identify how much impact it will have.”

Card check—While business interests in 2009 routed the Employee Free Choice Act—which, in effect, sought to replace secret-ballot elections with a card check system for the purpose of unionization—the issue is expected to emerge once again this year.

“Labor unions still are very much motivated on having a vote,” Flanagan said. “There doesn’t seem to be much momentum for it right now, but we’re continuing to monitor it.”

Food safety—Observers also expect food safety to come up again in Congress this year. The House passed in 2009 a bill that would give the Food and Drug Administration greater regulatory authority over the food supply, and it is anticipated that the Senate will have a go at the issue in 2010. While the industry did not support the House bill, several associations were more favorably inclined toward the Senate version, which was introduced by Sen. Dick Durbin, D-Ill. Vinson said the bipartisan food safety issue likely will be addressed in the first quarter of the year.

Favored tax breaks—Industry members also are keeping their eyes on a tax extenders bill, which was not addressed in 2009 but which many are hopeful will be tackled this month. A major component for the industry is the restaurant depreciation provision, which would retain the 15-year depreciation schedule for new construction rather than letting it revert back to 39.5 years. Another component, the estate tax, which was repealed in 2001, springs back to the full 55 percent in 2011.

Menu labeling—Menu labeling is another issue that appears to be in the cards for 2010. Foodservice trade groups currently support menu-labeling provisions that are attached to both the House and Senate health care reform bills, even as a group of 20 large restaurant companies seeks to broaden the proposals so they also apply to smaller operators.

It is not yet known whether the menu-labeling provisions will survive when the two chambers attempt to reconcile the two health care measures. However, French believes it will remain intact.

“There are not cost implications tied to it,” he said.— [email protected]