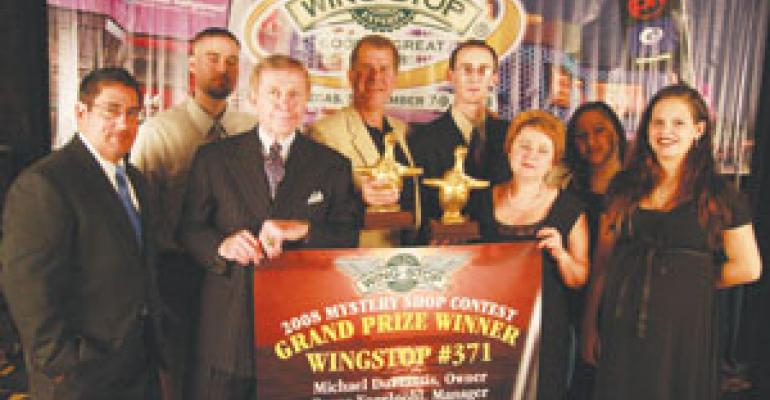 Arestaurateur would have to wake up pretty early to outperform Wingstop chief executive James A. Flynn—seriously early. Flynn, who has led 370-unit Wingstop to 21 consecutive quarters of same-store sales increases, rises every morning at 2:30 a.m., exercises and arrives at the office in Richardson, Texas, by 5:30 a.m.

He credits his time in the U.S. Naval Academy with instilling in him the discipline needed to start each day before nearly all of his competitors.

“My class was the first to be invited to serve on nuclear submarines,” Flynn says, “and that was even more structured.”

Accordingly, Flynn runs a tight ship and has steered Wingstop to growth in sales and unit counts since joining the concept in 2003. This past year Wingstop cracked Nation’s Restaurant News’ Top 200 census of chains, tallying annual systemwide sales of more than $200 million. It ranked first among Second 100 chains in growth of sales per unit and second in systemwide-sales growth. It also ranked tenth in growth of the number of units.

Wingstop’s recent accolades also include an American Business Award for Best Overall Company, a spot on Entrepreneur magazine’s 2008 “Franchise 500” list, and the “Wing King” award at the 2006 National Buffalo Wing Festival. The chain’s nine flavors of Buffalo wings and aviation-theme interior design have won over not only value-focused consumers but also former Dallas Cowboys quarterback Troy Aikman, who has been Wingstop’s spokesman for five years.

For the current year, Flynn projects systemwide sales of about $270 million, with average unit volume of about $740,000 and check averages between $14 and $15. The chain has 370 stores open, 18 of them company-owned, with a total of 650 in development.

“We still have an awful-good deal,” Flynn says. “There’s no question as long as we keep the quality of the food up and the price reasonable, we’ll continue to be successful.”

Flynn knows something about success in foodservice. In his 12 months as president of Popeyes Famous Fried Chicken, he took that company from a record loss of $6 million to a record annual gain of $6 million and then led its acquisition of Church’s Chicken. Prior to that, Flynn had worked for years at the Brown Shoe Co., following a stint as a Pizza Inn franchisee. He had honed his management and finance skills as a consultant for seven and a half years at McKinsey & Company after graduating from Harvard Business School in 1969.

Yet as much as Flynn likes to crunch the numbers, he always insists on getting out of the office and into the stores of Wingstop’s franchisees, who all go by the title “brand partner.”

“Jim travels more than anybody in the company but me, so he is definitely in the restaurants on a regular basis,” says Bill Knight, chief operating officer. “It keeps him in touch.”

Flynn values the customer service insights he gets from his prolific mystery-shopping, Knight says.

“We really stay focused on service because it’s a million little things that ensure our success, not the next big thing,” he says.

Flynn brought Knight into the company with him in 2003, along with chief marketing officer Andy Howard and chief financial officer Wes Jablonski.

“Our senior management group has been here for the duration,” Knight says. “I attribute that to Jim. He handles all the egos, and you can trust the man. That’s huge this day and age.”

Knight touts Flynn’s humility and ability to delegate authority and share credit as his greatest qualities as a leader. Meetings don’t last long when Flynn runs them, Knight says, and everybody knows their role and their collective goal: supporting franchisees.

“Our success is only to the degree of the restaurants and the men and women who operate them,” Knight says. “We don’t serve chicken out of the corporate office. Jim’s focus is on making our brand partners successful.”

Six-unit franchisee Michael DuPlantis says this focus comes through in his dealings with Flynn on Wingstop’s franchise advisory committee.

“Jim’s ultimate priority is what is best to the Wingstop brand,” DuPlantis says. “I’ve seen him accept [a decision that] wouldn’t have been his personal choice, but then he would enforce it as if it had been. He’s willing to put his ego aside.”

DuPlantis, a Marine who shares Flynn’s habit of getting to the office before his competitors have woken up, often finds Flynn turning up unannounced at his Houston-area restaurants.

“He gets ground-level views of everything,” DuPlantis says. “There are CEOs that never leave the ivory tower, and they’re managing data and statistics.… But getting down in the mud with us, you get a better feel for how to move the brand forward. Jim says, ‘I made the rounds and visited 127 stores, and this is what I’m seeing,’ as opposed to looking at 127 spreadsheets. Nobody would listen to that.”

But Flynn’s command of investment costs and sales data also brought about the profitable roll-out of boneless chicken strips, says Howard, who oversees Wingstop’s marketing, purchasing, and research and development.

“For some companies, adding a new product is no big thing,” Howard says, “but at Wingstop it was a huge deal. Our brand partners were saying, ‘No, don’t rock the boat,’ but Jim was supportive of us and said, ‘Let’s prove this out.’ It may have taken a year and a half before we rolled [boneless strips] out nationally, but now [the product] does about 12 percent to 15 percent of sales and has helped our comps.”

With Flynn’s support, Howard and Knight also spearheaded the introduction of online ordering, which currently is up and running at 200 stores and yields higher average checks in the $20 range. Flynn’s leadership style may not have everybody up at the crack of dawn, Howard says, but it gets everybody working hard and with purpose.

“Jim sets the tone,” Howard says. “He’s created a really exciting work environment. He’ll let you do all the nitty-gritty stuff, and he relies on the senior folks to go to him when they need to.… It’s a good feeling that you’re not micro-managed.”

Howard also points to signing Aikman as a spokesman as an initiative where Flynn, like a good quarterback, let the chief marketing officer run with the ball.

Even when Ernst & Young recognized Flynn in 2006 with an Operator of the Year Award for the Southwest region, he was quick to share the credit. Fittingly, he praised his team and franchisees for doing the blocking and tackling.

“When I won that Ernst & Young award, I told them they made a mistake when they put ‘Jim Flynn’ on it,” he says. “It should have said ‘The Whole Wingstop Team.’ A CEO can singlehandedly screw up a company, but there’s no way he could singlehandedly make a company as successful as Wingstop has been.”