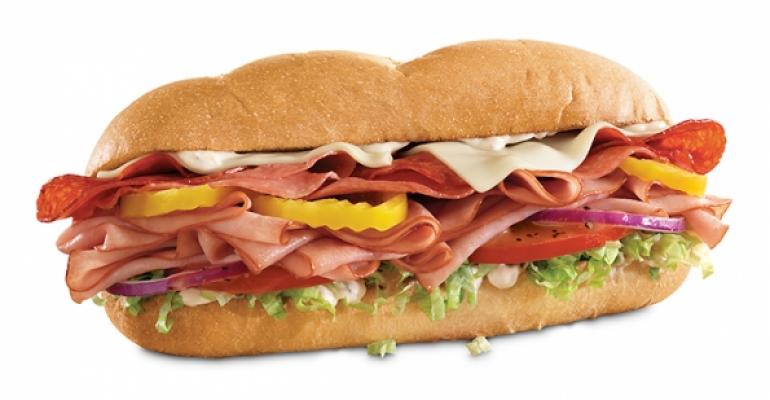 <p>Among the 25 new LTOs Arby&rsquo;s offered in 2015 were the Loaded Italian (pictured) and Sliders.</p>
What's Hot

Last year, consumers dined cost-consciously, but in 2015 they dined more adventurously. In a year when overall industry traffic increased just 1 percent, the brands that fared best were those that met consumers’ new needs by offering innovative products, according to officials at market research firm The NPD Group.

“It wasn’t so much about value this year,” NPD analyst Bonnie Riggs said. “It’s about the food, the innovation.”

That innovation often came in the form of indulgent creations, such as a bacon and egg pretzel roll sandwich, biscuit tacos, a jalapeño brisket sandwich, pulled pork cheese fries and bacon-wrapped pizza crusts. Indeed, many of this year’s new items featured copious amounts of bacon or slow-cooked meats, as well as bold or spicy flavors.

“When you can use hot, spicy sauces, stronger flavor profiles, you can influence consumers’ willingness to try things,” Riggs said.

According to NPD data, traditional quick-service items such as French fries, Mexican fare, breakfast sandwiches and biscuits, often menued with a spicy or meaty twist, topped the list of growing foods in 2015. 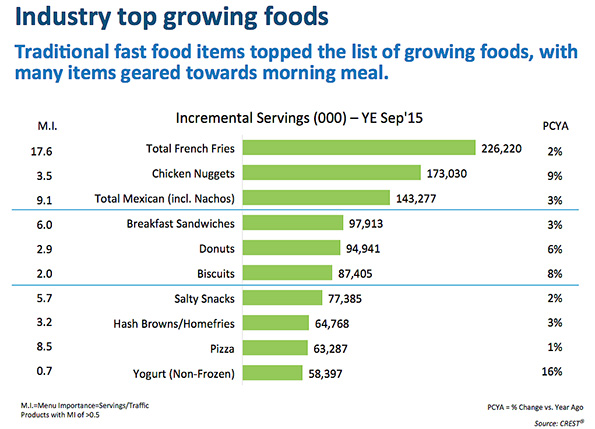 French fries, which had previously been on the decline, were a top food this year because of innovation, Riggs noted. Chefs got creative with the classic side, loading it up with cheeses, barbecued or smoked meats, spicy sauces, or hot peppers — and sometimes a little bit of all of those. 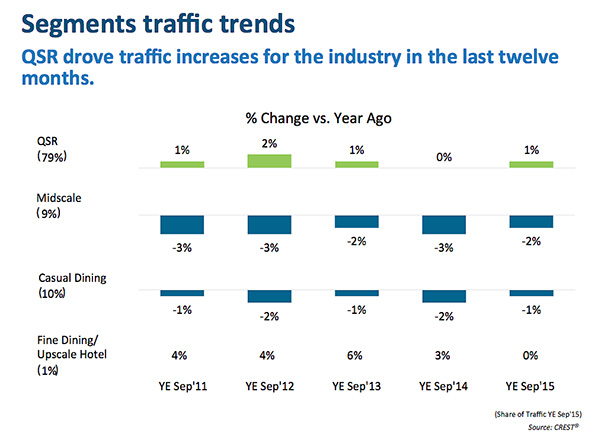 Many of this year’s new and different products were geared toward breakfast, NPD found. As a result, the morning meal, driven by quick service, continued its strong growth, increasing visits by 4 percent.

“[Operators] were trying to capitalize on where the growth is,” Riggs said of the many new breakfast products launched this year.

It can be a challenge to keep up with consumers’ ever-changing needs and to set your brand apart from the pack, but some quick-service chains managed to attract new customers in 2015. Taco Bell and Arby’s — two chain's that grew sales this year — share some of their products and thought processes behind their menu initiatives.

Taco Bell has been enjoying success for several years now in large part due to continuous product innovation that began with the launch of Doritos Tacos Locos in 2012. In 2015, the brand launched nine new food items and posted 4-percent same-store sales growth in the latest quarter.

Among the successful product innovations this year was the August launch of the DareDevil Loaded Griller, priced at $1, made with beef, tortilla strips, nacho cheese, and one of three spicy sauces, all wrapped in a tortilla, and the expansion of its recently launched breakfast menu with the March rollout of the Biscuit Taco with egg and cheese.

“Breakfast at fast food is a sea of sameness,” Taco Bell spokesperson Rob Poetsch said.
“What consumers really want are the classic flavors of breakfast delivered in a new way.”

While the Mexican chain introduced slightly fewer new products than last year, Poetsch said the pullback has enabled the brand to innovate across other areas.

“It wasn’t just a bunch of products we were innovating around,” Poetsch said. “Innovation is at the core of everything we do.”

Poetsch cited a number of non-food innovations in 2015, including being the first quick-service chain to offer vegetarian menu items certified by the American Vegetarian Association, launching online ordering and a delivery partnership with DoorDash, as well as the opening Taco Bell Cantina, an urban spinoff concept.

Innovative new products and a meaty marketing campaign to tout them have been driving the revitalization of Arby’s, the 51-year-old brand that has experienced 20 consecutive quarters of same-store sales increases.

“We had so many quality proteins [on the menu] — I think 11 — but most people didn't even know we had them,” said Neville Craw, Arby’s corporate executive chef. “The innovation process started with what we had.”

The process began in 2014 with the introduction of the Smokehouse Brisket Sandwich and continued this year with the launch of more than 25 new menu items through limited-time offers, double the number the chain released in the prior year. Among Arby’s most successful limited-time offers this year were Sliders, mini sandwiches with cheese and one of four different meats that launched in August; and the Loaded Italian, a hero roll piled high with pepperoni, salami, ham, Swiss cheese, lettuce, tomatoes, onions and more, which launched in September.

The key to driving sales and traffic with new items, Craw said, is creating products that are in the “fast-crafted zone.” Craw defines products in the zone as those that are made-to-order with care, include premium ingredients, and are drive-thru and on-the-go ready.

With more than 14 items already in test, the chain plans to continue its aggressive product innovation in 2016 and beyond.

“It starts and ends with listening to our guests, and then delivering innovation around meats,” Craw said of Arby’s success.