/sites/all/themes/penton_subtheme_nrn/images/logos/footer.png
Recent
Recent
NRN editors discuss single-seat cars, lessons learned during the pandemic, industry resiliency during Day 3 of the National Restaurant Association Show
May 24, 2022
Sustainability takes the spotlight at the 2022 restaurant show
May 24, 2022
Eight interesting foods at the National Restaurant Show that were not plant-based protein
May 24, 2022
T2D Concepts develops revolutionary franchise model in Roots Chicken Shak
May 24, 2022
Starbucks to exit Russia over Ukraine war
May 23, 2022
Featured
Tech Tracker: Toast launches POS solution for quick-service restaurants
May 17, 2022
Meet 4 emerging NYC concepts
May 16, 2022
Memphis Seoul brings Korean BBQ and Southern cooking to Brooklyn
May 11, 2022
Executives on the move: 13 restaurant leaders with new positions in April
May 03, 2022
Flavor of the Week
brought to you by
Consumer Trends

Flavor of the Week: The fifth taste – Umami 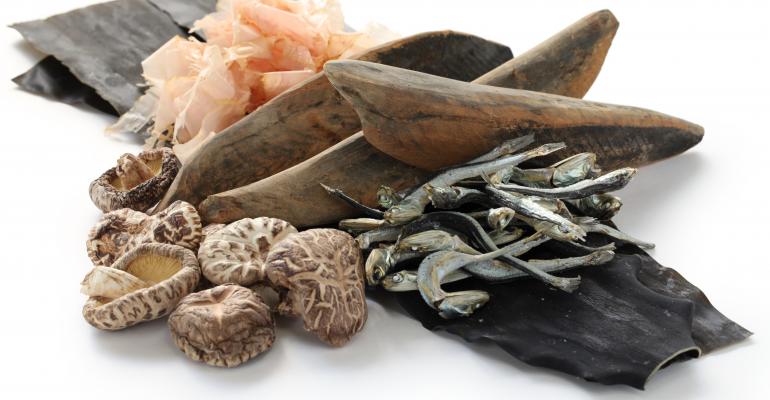 Umami is one of the five basic tastes (along with sweet, sour, salty and bitter) and implies a rich savory flavor that is characteristic of a long-stewed meat or broth.

Umami can be a confusing addition to restaurant menus because many consumers are unsure what umami actually is, and in fact less than a third of consumers know it despite its increased placement on menus in the past four years.

Umami can be developed in many forms, including as an added richness to mushroom or other plant-based dishes, or even to balance the sweetness in a cocktail through the addition of umami bitters.

Market research firm Datassential reports that 30% of the population knows about umami but only 19% have tried it, with awareness being highest amongst Asian consumers.

Click through the gallery to learn more about this Flavor of the Week and see how one restaurant is using umami on its menu.