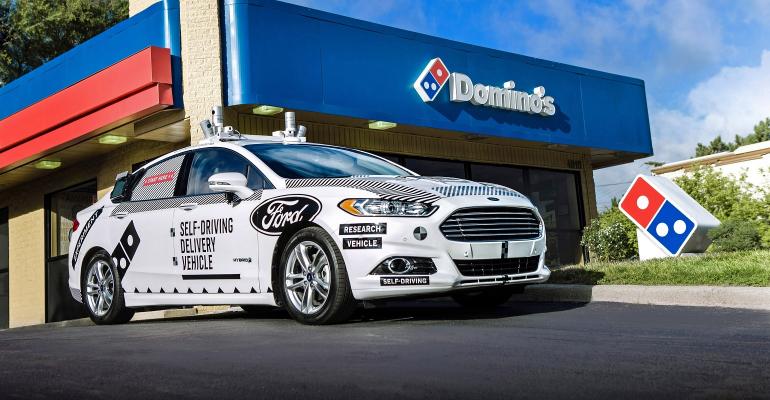 Domino’s Pizza Inc. is testing pizza delivery — without the driver.

The Ann Arbor, Mich.-based operator is working with Ford Motor Co. to test the potential role self-driving vehicles can play in the delivery process, the company said Tuesday.

Over the next few weeks, randomly selected Domino’s customers in Ann Arbor will receive their order from a Ford Fusion Hybrid Autonomous Research vehicle driven by a Ford safety engineer and staffed with researchers. Researchers from both companies will investigate consumer reactions to the self-driving vehicle.

“As delivery experts, we’ve been watching the development of self-driving vehicles with great interest, as we believe transportation is undergoing fundamental, dramatic change,” Domino’s CEO Patrick Doyle said in a statement. “We pride ourselves on being technology leaders and are excited to help lead research into how self-driving vehicles may play a role in future pizza delivery.”

He called it “the first step in an ongoing process of testing that we plan to undertake with Ford.”

Autonomous vehicle delivery has been a pie-in-the-sky idea for restaurants and retailers recently, as devices like drones and robots become cheaper and more viable. Meanwhile, technology firms like Google and automakers like Ford have ratcheted up their work on self-driving vehicles. The idea that a pizza chain would start testing self-driving delivery seems like a natural next step.

Domino’s is as likely as any restaurant chain to conduct such a test. The company has worked aggressively to increase its use of technology. It has pioneered mobile and online ordering technology, bringing ordering capabilities to televisions, cars, phones and other smart devices, as well as a mobile app.

Some of the efforts have come by working with Ford, based in nearby Dearborn, Mich., including Domino’s DXP delivery vehicle, which includes a warming compartment for pizzas, and to bring ordering to Ford vehicles.

“As we increase our understanding of the business opportunity for self-driving vehicles to support the movement of people and goods, we’re pleased to have Domino’s join us in this important part of the development process,” Sherif Marakby, Ford vice president of autonomous and electric vehicles, said in a statement.

Domino’s “shares our vision for a future enabled by smart vehicles in a smart environment that enhance people’s lives,” he added. Customers who agree to participate in the self-driving delivery test will be able to track the vehicle with GPS, using an upgraded version of the Domino’s Tracker service. They will also receive text messages as the vehicle approaches that will guide them on how to retrieve their pizza using a unique code to unlock the car’s Domino’s Heatwave Compartment.

“We’re interested to learn what people think about this type of delivery,” Russell Weiner, president of Domino’s USA, said in a statement. “The majority of our questions are about the last 50 feet of the delivery experience. For instance, how will customers react to coming outside to get their food? We need to make sure the interface is clear and simple. We need to understand if a customer’s experience is different if the car is parked in the driveway versus next to the curb.

“All of our testing research is focused on our goal to some day make deliveries with self-driving vehicles as seamless and customer-friendly as possible.”

Ford and Domino’s have already completed preliminary testing of the delivery process using the vehicle in self-driving mode at Mcity, the simulated urban environment on the University of Michigan’s campus. The city of Ann Arbor has also supported the testing process.