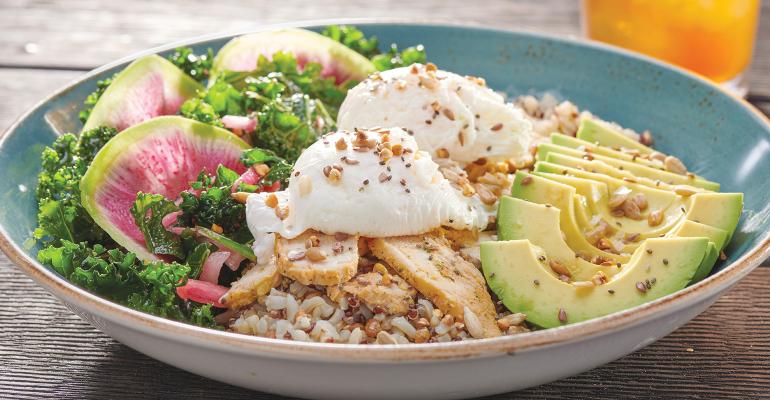 A lot is going on when it comes to breakfast, and for good reason: It’s the only daypart that’s growing.

Restaurant traffic for breakfast and morning snacks was up 1 percent for the year ended February 18, according to Port Washington, N.Y.-based research firm The NPD Group. Lunch was flat during that period and dinner was down by 1 percent.

Restaurants are responding with eye-catching limited-time offers that speak to the duality of the breakfast occasion: Sometimes the meal is used to start the day on a healthful note, and at other times it’s a moment to soothe the nerves in a blanket of syrup-drenched starch. The Spartanburg, S.C.-based chain with more than 1,600 domestic locations has responded with items like seven-grain bread, turkey bacon and more fresh fruit options. One better-for-you LTO currently on the menu is the Lightspeed Slam. One of several offerings tied in with LucasFilm’s “Solo: A Star Wars Story,” the dish is egg whites scrambled with spinach and grape tomatoes served with two turkey bacon strips, an English muffin and seasoned fruit.

“At the same time,” Dillon added, “we know that for many guests, going out to breakfast, particularly on the weekend, is a special treat, one that they want to indulge in.” For those occasions, Denny’s is promoting a rotating line of “Craft Pancakes,” such as the Dulce de Leche Crunch Pancake Breakfast (left) that was available in the first quarter. For that item, cinnamon crumb topping was cooked into two buttermilk pancakes, which are topped with whipped cream and served with a pitcher of a warm caramel sauce inspired by the Latin American dulce de leche, a sweetened milk-based caramel. Accompanied by two eggs, hash browns and a choice of bacon or sausage, the item was available starting at $9.29.

IHOP, which frequently offers indulgent breakfast promotions, recently introduced a King’s Hawaiian French Toast at its more than 1,600 domestic locations. For that item, the sweetened rolls are sliced, dipped in vanilla batter, grilled and topped with a choice of butter and powdered sugar, glazed strawberries and sliced bananas, or warm cinnamon spread and sweet cream cheese icing sprinkled with cinnamon and sugar.

“You get this interesting dynamic,” IHOP vice president of marketing Alisa Gmelich said. “The tops of the rolls get crispy while the inside is soft and fluffy.”

“It’s actually built kind of like a sandwich, similar to a Croque Madame,” Gmelich said.

Prices for the IHOP items vary by location. “People are opening their minds a little bit more to what they will eat for breakfast,” he said.

For example, there was a time that breakfast grains stopped at grits and oatmeal. Now customers at First Watch’s roughly 200 locations are enthusiastic about other grains, including the new Ancient Grains Protein Bowl, which Schaibly said is “doing very, very well.”

That dish is made with quinoa, farro and brown rice topped with two poached eggs, chicken breast, avocado, a lemon and white balsamic vinaigrette, and a sprinkle of sunflower, flax and chia seeds. It comes with a salad of kale, watermelon radish and pickled onions.

Schaibly said he also expects the Everything Spiced Smoked Salmon Benedict, flavored with the same toppings as an everything bagel, will be popular when it’s launched this summer.

“Hashes continue to do really well for us,” he added.

This summer he’s planning to introduce one flavored like Mexican street corn.

The Elote Mexican Street Corn Hash will feature roasted corn, chipotle crema and cotija cheese mixed with chorizo and potatoes, then mixed with cheese, browned in the oven and topped with sliced avocado and more cotija cheese, chipotle crema and cilantro. Instead of toast and preserves, which usually accompany a First Watch hash, it’ll be served be with lime and tortillas.

“All the things that make elote authentic, we’re going for,” he said.

Delivery is becoming a more popular option at breakfast, just as it has in other dayparts, something Denny’s spearheaded with its Denny’s on Demand platform. Dillon said Denny’s signature Grand Slam breakfasts and pancake dishes are among the most popular items ordered for delivery — among all dayparts.

Both Denny’s and IHOP launched new packaging for delivery in 2017 that would keep pancakes warm while also allowing them to breathe.

“Part of the reasons why we created these is we were seeing an increase in our to-go breakfasts,” IHOP’s Gmelich said.

So the chain wanted to create items they could eat on the go, she said.

They include the Ultimate Waffle Stack, a sandwich for which the bread is a cheddar cheese flavored Belgian waffle cradling two eggs, six slices of bacon, maple glaze and a slice of white cheddar.