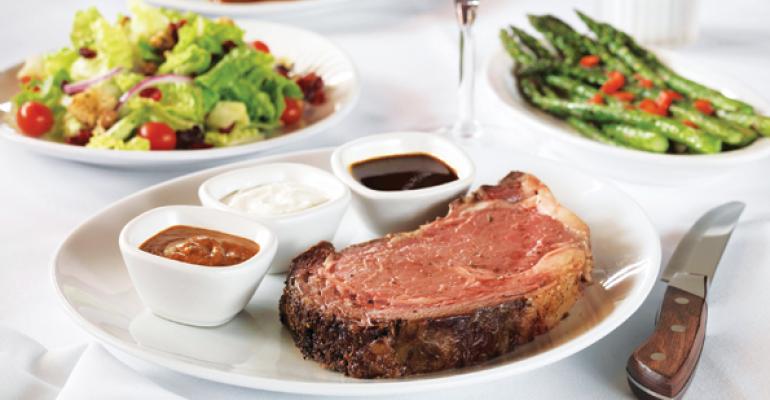 Although the fine-dining category grew more robust in the 2014 Consumer Picks survey with the addition of two new chains, Ruth’s Chris Steak House maintained its grip on the top spot.

The Winter Park, Fla.-based chain, with 122 domestic units and 18 international locations, won top scores for seven of 10 attributes, including Value, Cleanliness, Service, Menu Variety, Reputation, Craveability and Likelihood to Recommend. Morton’s the Steakhouse, No. 2 overall in the category for the second straight year, won on Atmosphere. With the exception of scores for Value, Craveability and Likelihood to Recommend, the scores for Ruth’s Chris and Morton’s were statistically equivalent.

Read more about the brands winning with consumers >>

McCormick & Schmick’s, the only chain in the category not intimately associated with steak, landed at the bottom of the list, with significantly lower marks than the other four chains in terms of Craveability. Ruth’s Chris, with its distinctive, butter-topped steaks, scored more than 21 percentage points higher.

Ruth’s Chris’ top marks for Menu Variety and Value can be linked to its Sizzle, Swizzle & Swirl Happy Hour promotion of bar snacks, including smoked salmon with lemon crème fraîche and herbed flatbread crisps, sliced seared ahi tuna, and a crab BLT on grilled garlic bread served with zucchini fries and roasted red pepper-ranch sauce. All of those items are priced at $7 during happy hour and $11 to $16 afterward.

Correction: April 4, 2014  This story has bean updated to reflect the correct location of Ruth's Chris Steakhouse's headquarters and its current unit count.