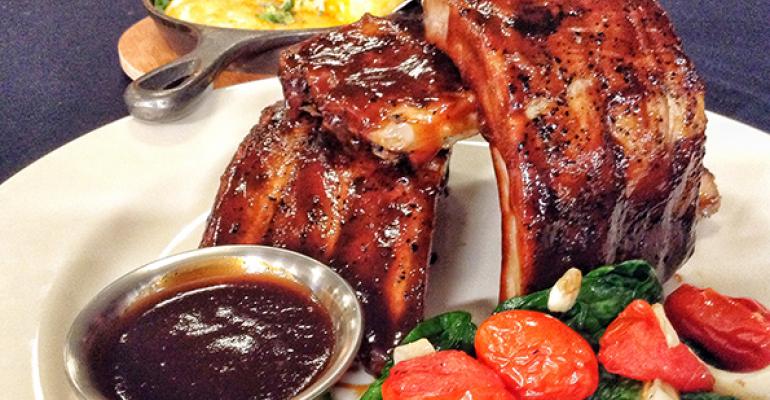 Chili’s Grill & Bar hosted an event Thursday night that it dubbed #ChilisUnderground in the test kitchen on the corporate campus of parent Brinker International Inc. for an early peek at a new “Fresh Tex” menu that will debut on Jan. 19.

The new offerings include reformulated sauces for the chain’s Baby Back Ribs, smoked chicken quesadillas with jalapeño aïoli, and new “Skillet Sides,” such as seasonal asparagus with cherry tomatoes, potato wedges with dipping sauces and cheese-baked jalapeño cornbread.

But #ChilisUnderground guests were kept in the dark about all of that.

Dallas-based Chili’s sent mysterious #ChilisUnderground invitations via Twitter direct message. Eighteen social media mavens responded to the culinary adventure, sight unseen. Picked up from various destinations by Uber near the event time, participants were delivered to what was still at the time an undisclosed location.

Thanks for the Uber Black, @chilis! Headed to #ChilisUnderground. Excited to see what's in store! pic.twitter.com/YpHrcQMDuO

“There’s a growing interest in handcrafted and local,” Bulgarelli told the group before removing ribs from a pecan-smoker.

Daniel Van Kirk, a comedian who flew in from Los Angeles, posted on his Twitter account as he dove into the Baby Back Ribs: “About to go at this Game of Thrones style. Bare hands and topless.”

About to go at this Game of Thrones style. Bare hands and topless. #ChilisUnderground @Chilis pic.twitter.com/rZ9BE0svZh

#ChilisUnderground guests got a quick lesson in Chili’s Baby Back Ribs and how their preparation in house sets the brand’s menu apart.

Matthew Decuir posted his findings: “Did you know @Chilis smoke all their ribs in-house?”

Did you know @Chilis smokes all their ribs in-house? #ChilisUnderground

Aisha Fletcher, a Brinker spokeswoman, said: “The concept of underground dining is popular with many independent restaurants, so we took this idea and adapted it to create the first Chili’s underground dinner.”

The company’s goal, with about two months of planning, was to bring together “a diverse group of people passionate about food, beer and Texas and provide an intimate setting where they could connect with each other and Chili’s Culinary Team,” she said.

In addition, the #ChilisUnderground’s test kitchen venue “was the perfect backdrop because it allowed us to give them a peek behind the curtain into our slow-smoking process, which many people don’t realize Chili’s restaurants nationwide do in-house every day,” Fletcher said.

While the three tables of guests talked with Brinker chefs — including Bulgarelli, David Stadtmiller and Jason C. Amell — they also got a lesson in fruit-infused cocktails from Sara Fasolino, Brinker’s senior manager of alcohol procurement.

Most of the more than 15 Brinker culinary team staffers volunteered for the evening’s service.

The #ChilisUnderground offerings also hinted at menu items down the road. Bulgarelli provided a sweet ending to the evening with a shareable dessert, tentatively called a Skillet Cinnamon Roll, which should appear on Chili’s menu in April.

Correction: Jan. 12, 2015 This story has been edited to reflect the correct name of the "Fresh Tex" menu.