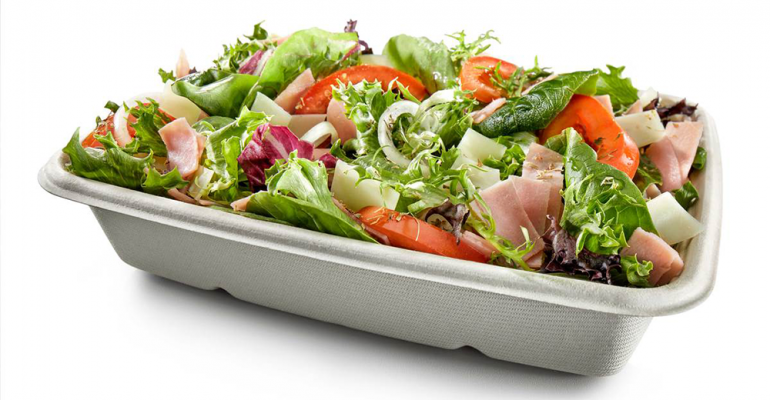 Cousins Subs' Cold Sub in a Bowl, in which the contents of any sub sandwich are served over greens.
Menu>Chef Insights

Less gluten, more produce and protein, no alcohol (at least in January)

The start of a new year inevitably ushers in a rash of menu items meant to assuage the guilt of holiday revelers and accommodate their freshly minted dietary resolutions. January brings the predictable wave of better-for-you, vegetable-heavy alternatives, but this year, restaurateurs will also address an ongoing shift in consumer behaviors as many diners 86 conventional diet plans in favor of nutritional lifestyles.

We are gluten avoiders. A recent report from the Genetic Literacy Project notes that gluten-free living appeals to about 30% of Americans despite the fact that only about one in 100 suffer from celiac disease. As glutenless eating has taken hold with consumers, some chain chefs have responded with clever adaptations of their standard offerings, like the new Cold Sub in a Bowl at the Milwaukee-based Cousins Subs, in which the contents of any sub sandwich are served over greens. Another example is the recently released No-Doh Pizza from Ohio-based Rapid Fired Pizza, in which pizza toppings are served over spinach or gluten-free, low-carb Parmesan crust. 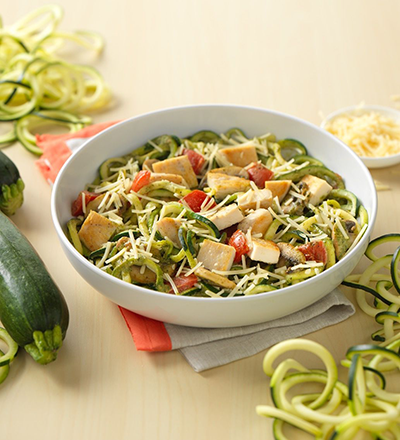 Other operators have made hay with spiralized pastas and noodles made from vegetables. Houlihan’s jumped on the trend early, and their current menu includes Spiralized Zucchini Pesto Salad with organic vegetables and lemon vinaigrette as a side dish. Noodles & Company, also an early adaptor of the spiralized trend, offers the best of both worlds with its Zoodles line. The totally gluten averse can choose Zucchini Pesto with Grilled Chicken (pictured) made with zucchini noodles and basil pesto sauce. Those looking to cut out some carbs can opt for the Zucchetti Garlic & Wine Sauce with Grilled Chicken, which features a 50-50 combo of zucchini noodles and conventional spaghetti. And while not gluten-free, the new Cauliflower Rigatoni Fresca with shrimp or light onion cream sauce fuses cauliflower with regular rigatoni pasta to appeal to the growing legions of cauliflower seekers.

We’ve changed our calculations.  A couple of decades ago, consumers played a simple version of dietary math, where the amount of fat, sugar, sodium or calories was subtracted or removed altogether. Over time, the arithmetic shifted to addition, and chefs instead added fresh, seasonal or locally grown produce or amped-up protein that gave diners the green light to indulge.

Today’s consumption equation has become much more complex, driven by a flurry of emerging dietary regimens like Keto, Paleo and Whole 30. Though each has its own specific guidelines, they generally eschew sugar, alcohol, grains and processed foods. While some, if not all, of these programs may eventually go the way of the Atkins-diet craze, operators are hustling to address current consumer interest. Plano, Tx.-based better-burger specialist Mooyah jumped on board earlier in 2019 with its Lifestyle Burger line that offered paleo, keto, Whole30, vegetarian and gluten-free options. At the end of 2019, Chipotle took a similar approach with Lifestyle Bowls that feature paleo, keto and Whole30 choices, as well as a Double Protein Bowl that includes full portions of both chicken and steak.

We drink differently. Some imbibers have joined the Dry January movement, a 31-day break from booze that has been going strong in Great Britain since 2013 and has more recently caught fire in the United States. Forbes reported that one in five Americans participated in 2019, which led brewers at Heineken to create a limited edition, non-alcoholic beer dubbed Heineken 0.0 that is helpfully packaged in a 31-can Dry Pack, one for every day of the month.

Menus are also awash in moo-less milks: nondairy alternatives made from nuts, grains and legumes. Starbucks added oat milk to some of its locations, and yogurt specialist 16 Handles debuted a Chocolate Hazelnut Truffle flavor made with cashew milk.

Looking ahead, while many operators remain compelled to slice and dice menu offerings on the basis of the diet programs and ingredient crazes du jour, they might take a lesson from an unexpected source: McDonald’s. In 2018, the chain bit the operational bullet with its introduction of fresh beef on Quarter Pounders, and in the first half of 2019, the chain sold over 55 million more quarter-pound burgers than the prior year. For many consumers, fresh remains best. Easy to understand, it’s just virtuous enough to drive purchasing behavior.