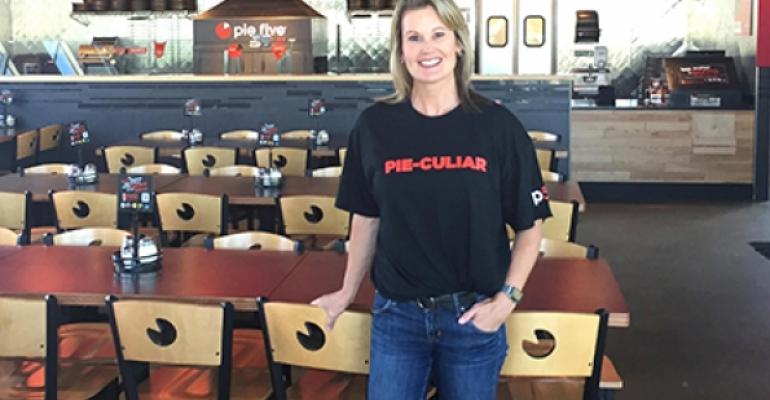 Patty Scheibmeir is a pizza veteran. She spent 14 years working at Pizza Hut before starting her own consulting business, with clients such as take-and-bake pizza chain Papa Murphy’s as well as such non-pizza clients as KFC and Applebee’s Neighborhood Grill & Bar.

Almost a year ago she joined Dallas-based Rave Restaurant Group, parent of Pizza Inn and Pie Five, as vice president of research & development and product innovation.

Pie Five is a 55-unit fast-casual chain at which pizza is made in front of guests according to their specifications and baked in 145 seconds. Although the pizzas are customizable, nine specialty pies also are on offer, as well as dessert pizzas.

Scheibmeir also introduces about six limited-time offers per year at the chain.

She recently discussed her work there with Nation’s Restaurant News.

I always start with the customers. I look at food trends. I love to eat. I love to go out and see people. I watch them eat in restaurants. I don’t just eat pizza, I eat all kinds of food. I watch competitors and lifestyle trends. I read a ton. I look at all the trends and take that all into consideration.

For 2016 I put together this whole series of what we should look at next year. Then we did consumer research to help us narrow down areas of development that we should be looking at based on those trends.

What kind of consumer research do you do?

This was an online screening with our Circle of Crust [Pie Five’s loyalty program] members. I think it was 5,000 consumers that we screened. It was across all of our 16 states. Then I took their input, and I’ve got it down to the winning concept areas. Now I’m creating 20 to 25 different pizza varieties, making everyone around the office here taste them, to narrow them down to about 10 to 15 of our favorites, at which point we’ll do consumer research where the customers will taste them. That will be done in our restaurants.

Do you invite them in as a focus group?

It’s a little bit more quantitative than a focus group.

I put together a survey for them to fill out, and I’ll have them taste a maximum of four different pizzas over a 30-minute time period. Then we’ll have the next group of 10 or 12 customers come in and taste another four different pizzas. That will go on for usually two to three days. We’ll have 10 customers come in every 30 minutes and get really good survey results.

Then we’ll narrow it down to our top six for next year. Those recipes then will be refined — I’ll work on the operations and profitability of those products.

Then do you do market tests and operational tests?

We don’t do market tests typically. I do sometimes do some operations tests. If it’s a complex operation I’ll go into a restaurant or two to make sure it makes sense. Then I work really closely with my finance-and-purchasing team to make sure that it’s profitable.

Can you walk me through some recent items that you really liked?

We had the Thai-riffic pizza that was earlier in the year [with sweet chile sauce, sliced grilled chicken, a mix of vegetables, crushed red peppers, carrot sticks and cilantro]. It did pretty well for us. Then we moved on to the Maui Wowie, which did extremely well. It was basically a Hawaiian barbecue pizza. It had Canadian bacon, pineapple, barbecue sauce and bacon with fresh cilantro at the end, and that was delicious. Then we had the Carolina Gold after it [topped with smoked pulled pork, diced pickles, cheddar cheese, red onion and Carolina Gold barbecue sauce]. Each of our LTOs lasts about six weeks and then we go off for a few weeks without any promotion, and then we go back on with a new promotion.

What’s the motivation for these promotions? Is it to drive traffic or boost sales or create news or increase interest in the restaurant?

A little bit of all of that, actually. We like to have new product news. We like to excite our customers, get them in, remind them that we’re right around the corner and have something new and exciting for them to try. New product news is very disruptive, so it’s important for us to get out there and remind people that we’re here.

For an LTO to be successful, do people necessarily have to buy it, or can it be enough just to bring them into the restaurant more often to order whatever they like best?

We do look at the sales of that particular item to see if it increased in sales, but we also look to see if sales in general for that time period increased.

Absolutely. It’s also possible that you came in and you got the pizza and the peanut butter cup brownie but you took the brownie home for later. That would be even better.

Do people buy a lot of desserts at your restaurant?

And you make them as whole pies, right?

We make them as whole pies, but we sell them by the slice as well. They’re usually right under $2.

Do people buy a lot of whole dessert pies?

We did the Monster Brownie in partnership with Oreo. It’s got chocolate chip cookie brownie on the bottom, Oreos right in the middle and brownie on the top, and then a nice icing drizzle across the very, very top. It’s delightful.

When you team up with a brand like Oreo, what is their involvement in the process?

They helped us with some of the advertising and product sourcing.

We worked with our supplier a lot on that. These happened to be already chunks of Oreos, so we didn’t have to break them apart.

Then you layer them on top of the cookie?

Do the Oreo cookies get baked, so the white filling melts?