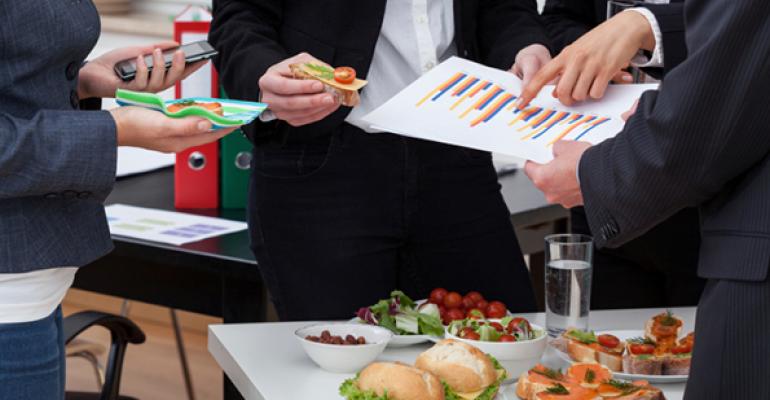 Local sourcing of meat, seafood and produce is expected to remain a top culinary trend in 2015, but nose-to-tail cooking, bruschetta and kale salads are on the decline, according to an annual survey of chefs conducted by the National Restaurant Association.

For its "What’s Hot in 2015" Culinary Forecast, released Wednesday, the NRA surveyed nearly 1,300 chefs, all members of the American Culinary Federation. They were given a list of 231 items and asked to rate them as a “hot trend,” “yesterday’s news” or a “perennial favorite.”

Hudson Riehle, senior vice president of the NRA's research and knowledge group, said the growing trend of food waste reduction and management "mixes those eco-friendly practices with the social responsibility component [such as donating extra food to those in need] as well as the additional benefit of cost management."

Artisan butchery was not far behind artisan cheese, in the 23rd spot. Other top gainers were housemade condiments, at 40th place, and oven-baked items in kids’ meals, at 53rd place, according to the NRA.

Riehle added that rising food costs were cited by 34 percent of operators as their top challenge, rising from just 18 percent last year, and in stark contrast to pre-recession surveys, when labor recruitment and retention was always cited as the biggest challenge. He also noted that wholesale food prices rose by 1.2 percent from September 2014 to October 2014, and have currently increased by 5.3 percent year over year, the highest growth rate in three years. 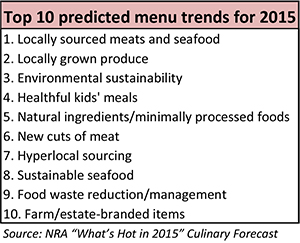 The NRA also broke down the top trends by category, noting that microdistilled/artisan spirits were the top alcoholic trend, followed by locally produced beer, wine and spirits. Gourmet lemonade and specialty iced tea topped trends in the non-alcoholic beverage category.

In the appetizer category, vegetarian starters were the top trend, followed by house-cured meats.

Peruvian and Southeast Asian cuisines were singled out in the “ethnic flavors and cuisines” category, in fourth and fifth places, respectively. Topping the list was ethnic fusion cuisine, followed by authentic ethnic cuisine and regional ethnic cuisine.

Although gluten-free food has slipped down chefs’ radars, 6 percent said it would be the hottest culinary trend 10 years from now, making it the fifth most popular answer. The most popular answer was environmental sustainability, followed by local sourcing, nutrition, and ethnic cuisines and flavors.

To see the full report, visit the NRA website.